A.K.A. that time I used a lot of bash for loops and awk commands while understanding what I was doing.

I noticed Mac’s 2013 paper included how much of the original input DNA was recovered from MBD procedures. I figured it was a good thing to include in my paper too! In this spreadsheet, I documented the µg of DNA input I used from each sample. In total, I used 37.28 µg. After MBD, the samples were resuspended in 25 µL of buffer. The total yield was 1.42515 µg. This meant that only 3.82% of DNA was recovered after MBD.

One important part of characterizing general methylation trends is to explain how many reads were used for analysis. In this Jupyter notebook, I downloaded FastQC and bismark reports. I originally thought I should download the full trimmed and untrimmed files, but in this issue Steven pointed out that all of that information would be stored in summary reports.

I used a similar series of commands for each report to obtain read counts:

Since I did MBD, it’s unlikely that all 14,458,703 CpG motifs are represented in my dataset. I want to know how many CpG loci have at least 1x coverage across all of my samples. To do this, I first filtered 1x loci, but only saved the chromosome, start, and stop positions:

I then used cat to combine all of my files vertically (similar to rbind in R). I sorted the loci with sort, then piped the sorted output into uniq -u to only get unique lines. My output file has only the chromosome, start, and stop positions.

I want to describe general methylation trends, irrespective of pCO2 treatment in my C. virginica gonad data. Claire and Mac both had sections in their papers where determined if a CpG locus was methylated or not. From Mac’s 2013 PeerJ paper:

A CpG locus was considered methylated if at least half of the reads remained unconverted after bisulfite treatment.

They characterized this using methratio.py in BSMAP, but Steven pointed out I could use .cov files in this issue. In this Jupyter notebook, I first identified loci with 5x coverage for each sample by using this awk command in a loop:

The next step was to concatenate all loci with 5x coverage across my five control samples. In this step, I’m essentially mimicing methylKit unite. I used a series of join commands for this task, then used awk to clean up the columns.

The final file with 5x loci across all samples can be found here. By summing the percent methylation information from each sample for each locus, I could characterize its methylation status and separate loci and save these loci in a new file:

ADDED 2019-03-19: To visualize the frequencies of methylated, sparsely methylated, and unmethylated CpGs, I created a frequency distribution plot in this R Markdown file. I saved the plot here as a pdf, but here’s a screenshot: 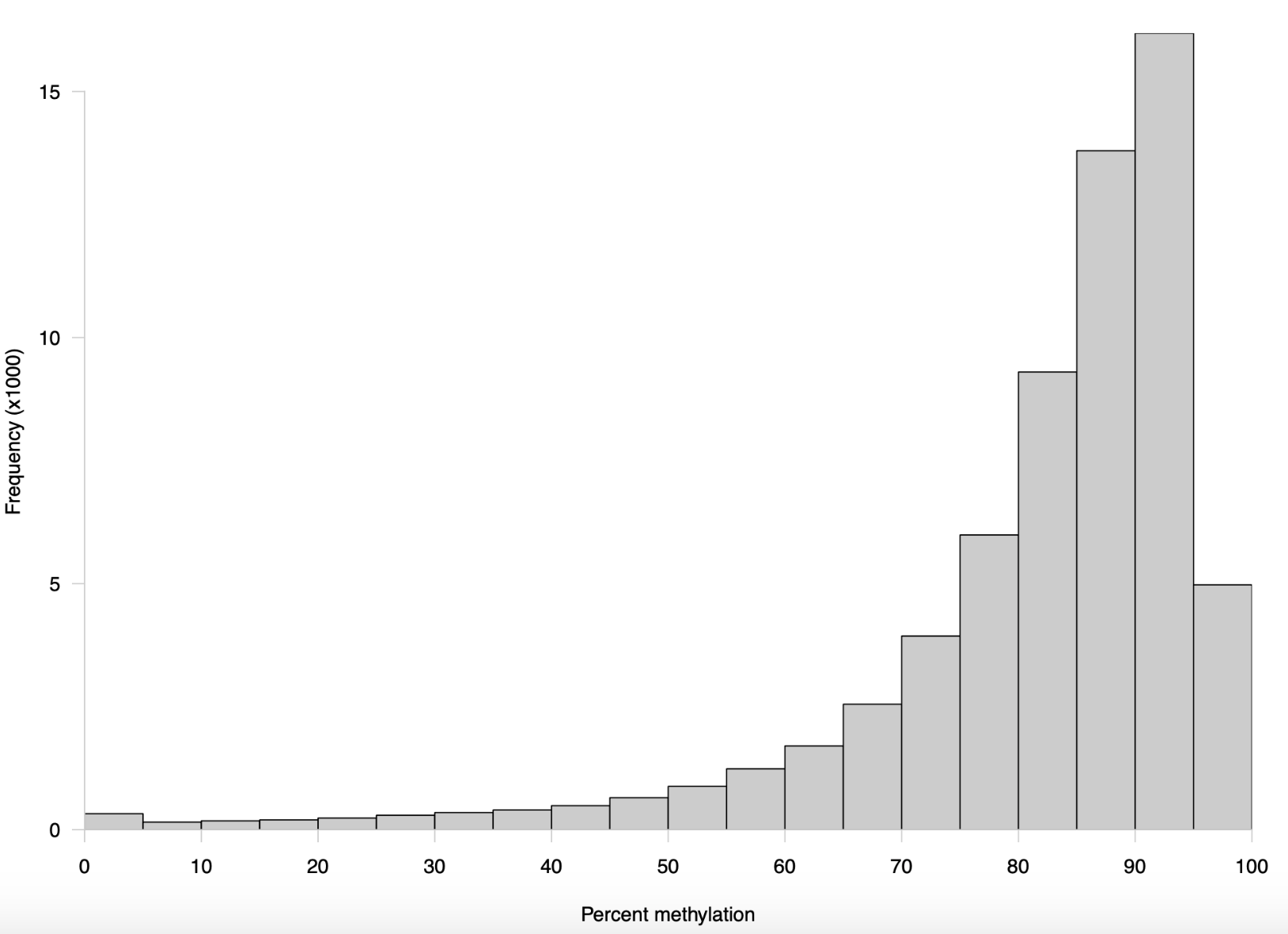 The last step to describe methylated CpG is to figure out where the 60,552 loci are in the genome! I set up intersectBed in my Jupyter notebook to find overlaps between my methylated loci and exons, introns, mRNA coding regions, transposable elements, and putative promoter regions. When creating my BEDfile, I needed to specify tab delimiters (\t) to get intersectBed to recognize the file:

I had lots of awk and bash coding issues today BUT I FIGURED MOST OF THEM OUT MYSELF! Just in time to go on vacation and lose all of my hard-earned coding prowess.

These are the things I’ll tackle after I get back from vacation: