Even more troubleshooting with IGV

Looking at the gene background, I noticed that there were columns with coverage metrics, as well as the number of cytosines and thymines at each locus. The start and stop position for each locus was the same, which could be affecting how the visualization occurs in IGV. 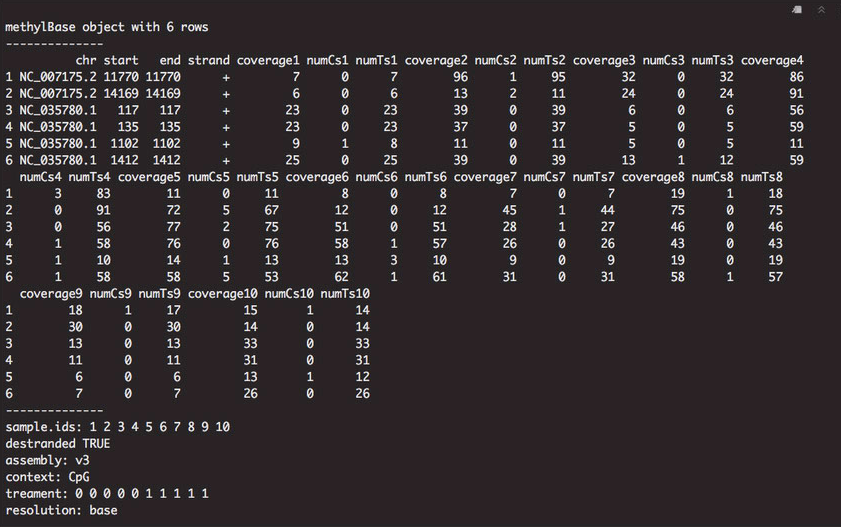 I decided to subset the first four columns for exporting: chromosome (chr), start position (start), stop position (stop), and strand (strand). I did this by creating a new dataframe. I also subtracted 1 from each start position to visualize the data. Finally, I exported the gene background as a BEDfile and looked at it in IGV.

I opened this IGV session, which had my previous gene background file in it. I added the new file and compared the two versions:

Difference between gene and mRNA tracks

Based on this information, I decided to use subtractBed with the gene ane exon tracks to create my intron track. When I looked through that track in IGV, I found that there were some areas where the intron track looked good. Introns from coding sequences were included (unlike the one I generated using mRNA), and the first bp in every exon sequence was no longer being included in the intron track.

However, there were instances of the intron track I generated still including exons:

I posted my findings in this comment and asked if it was an artifact of enforcing same strandedness with -s, or if it was worth using subtractBed on the intron and exon tracks to get rid of the overlaps. Since exons and introns are on the same strand, I don’t think -s is the issue, but perhaps there’s a different way I need to code it.

One thing I’ve been meaning to do for a while is characterize location differences between hypermethylated and hypomethylated DML. While I did just generate genome feature tracks myself, I decided to use the pre-made tracks I downloaded to complete this analysis so I know the code works. I can always revise the paths to the tracks later once my tracks are finalized.