Now that I’ve tested methylation island analysis, I want to finalize my C. virginica and C. gigas MI tracks and look at the location of MI in the genome and in relation to DML.

I then visualized the tracks in IGV! The two 500 bp tracks are pretty comparable, but there are definitely places without MI in the 500 bp tracks that were in the 200 and 300 bp tracks.

When I asked for feedback on the tracks in this issue, Steven pointed out that some of the MI were in fact less than 500 bp.

I don’t undertand why the script still created MI that were less than 500 bp! I decided to manually filter by length using this code:

Almost 30,000 of the MI I identified did not meet this size threshold!

Tables 2. MI characteristics after filtering by size. No MI should be less than 500 bp.

Based on the feedback, I decided to move forward with the filtered 500 bp windows, 0.02 mCpG fraction, and 50 bp window sizes.

Location in the genome

In this Jupyter notebook, I characterized the location of genome feature tracks and DML with respect to MI.

To visualize the MI in the C. virginica genome, I decided to create boxplots similar to Jeong et al.. I started by importing MI-feature track overlaps in this R Markdown script. For each file, I calculated the length of the MI, then divided the base piars that overlapped by the MI length. This gave me an overlap percentage that I used in boxplots! I created a base plot, but decided not to spend too much time on it now and return to it for my reviewer comments in a few days. The code I used for calculations and to make the plot was important than actually making the plot pretty and saving it.

To identify methylated CpGs in the C. gigas genome, I need to characterize the general methylation landscape. Although Claire and Mac did this previously with ctendia, I wanted to go through this process with my gonad samples in the event that somatic and gonad tissue had variations in methylation landscapes. Additionally, Claire and Mac identified mCpGs using 5x data, and all of my analyses were done with 10x data.

When I went to access my coverage files on ganent, I found that I had overwritten these files! the folder with bismark output no longer existed…which meant I had to rerun bismark. :sob:

Based on previous lab notebook posts detailing my struggle running mox last time, I made a quick change to this script so my deduplication would run only on my sample files, and not proceed iteratively through a bunch of other files. I used the following code to transfer my files over to mox:

It took me a few failed runs to realize I transfered files to the incorrect directories or didn’t transfer the files at all. I definitely opted for a more complicated file structure in my script but if I would have perused the script more carefully beforehand it wouldn’t have been a problem. A good reminder for me to really read the script! Once every file was where I said it would be, I ran my script and hoped for the best. I used the following code to check up on progress:

Even though I set up the script to run through all of bismark, I thankfully only need the coverage files to proceed with my analyses.

One day and six hours later, my bismark run completed! I used this code to transfer the files off mox:

While my files were processing, I set up this Jupyter notebook to create a master file and characterize methylation. Using the head of two C. virginica coverage files, I used a series of commands to merge the information in both coverage files. I then used these commands on the coverage files I got from bismark. Yay efficiency!

Before I created a master coverage file, I quickly created 5x and 10x sample bedgraphs in this Jupyter notebook since the output wasn’t on gannet or in my repository…RIP.

Alright, BACK TO THE GOOD STUFF. First, I created a new column in each coverage file that combined chromosome and start bp information. I will need to use this information to sort files and join them.

Next, I joined the two files by the chr-start column. In order to simulate an outer join, I specified that unmatched lines in each file should be included in the output using the -a argument. The only time a locus would be in one file and not another is when there are no reads for that locus in one sample. To clean up the file, I replaced any empty fields (methylation percentage, count methylated, count unmethylated) with 0 using -e 0. I then specified which columns I wanted printed in the output using -o. Before saving the output, I used tr to translate the “-“ in the first column to a tab delimiter. This way, I did not have to deal with any redundancy in the locus start positions from each files or figure out how to merge the columns while dealing with zeroes.

Finally, I consolidated the methylated and unmethylated read counts from each file, summed the total number of reads at each locus, and calculated the revised methylation percentage.

I have data for 12,728,174 CpGs at 10x read depth. After reducing the dataset to loci with at least 10x coverage, I identified methylated (≥ 50%), sparsely methylated (≥ 10%, < 50%), and unmethylated (< 10%) CpG loci in this Jupyter notebook. I also characterized the location of these loci in relation to various genome features.

In this Jupyter notebook I generated the methylation island track using the same parameters I used for C. virginica.

Tables 2. MI characteristics after filtering by size. No MI should be less than 500 bp.

I then visualized the MI in this IGV session. The MI in C. gigas are much more sparse, which is different than C. virginica.

Location in the genome

In this Jupyter notebook, I used bedtools to characterize the overlaps between C. gigas MI and genome feature tracks! I was able to run the code and get counts, but the output format for the Intron-MI and Promoter-MI files looked wonky: 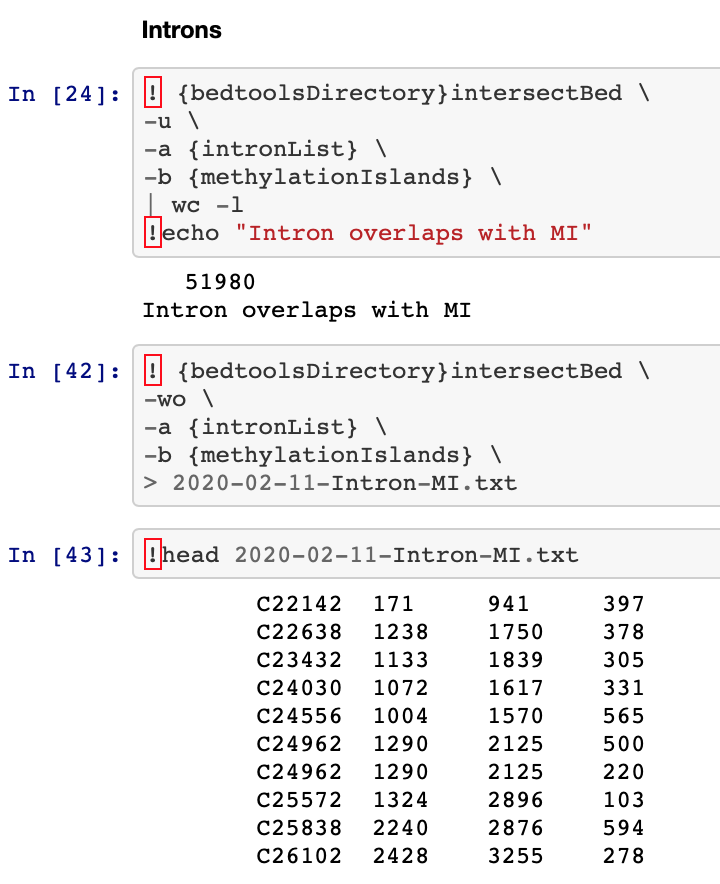 I posted this issue to figure out why my output looked this way, since I needed proper output to correctly count overlaps and create MI overlap figures.

The sparse MI definitely translates to fewer overlaps between DML, but similar overlaps between MI, exons, introns, and genes in both species. Since I don’t trust the intron output, I’m unsure if the actual number here is correct, but in the offchance it is, I included it. Transposable elements and promoters in the C. virginica genome had more overlaps with MI than those same features in the C. gigas genome.

In this R Markdown file I created a standalone C. gigas MI overlap boxplot as well as a grouped barplot with C. virginica and C. gigas data. Again, I didn’t pay too much attention to the standalone plot since I figured I’d come back and use it again when I had more data. Even though my intron overlap data formatting issue prevented me from creating a boxplot with C. gigas intron information, I created a grouped barplot for C. virginica and C. gigas data. I learned you could use at to set where on the x-axis to place individual boxplots to artificially group them! 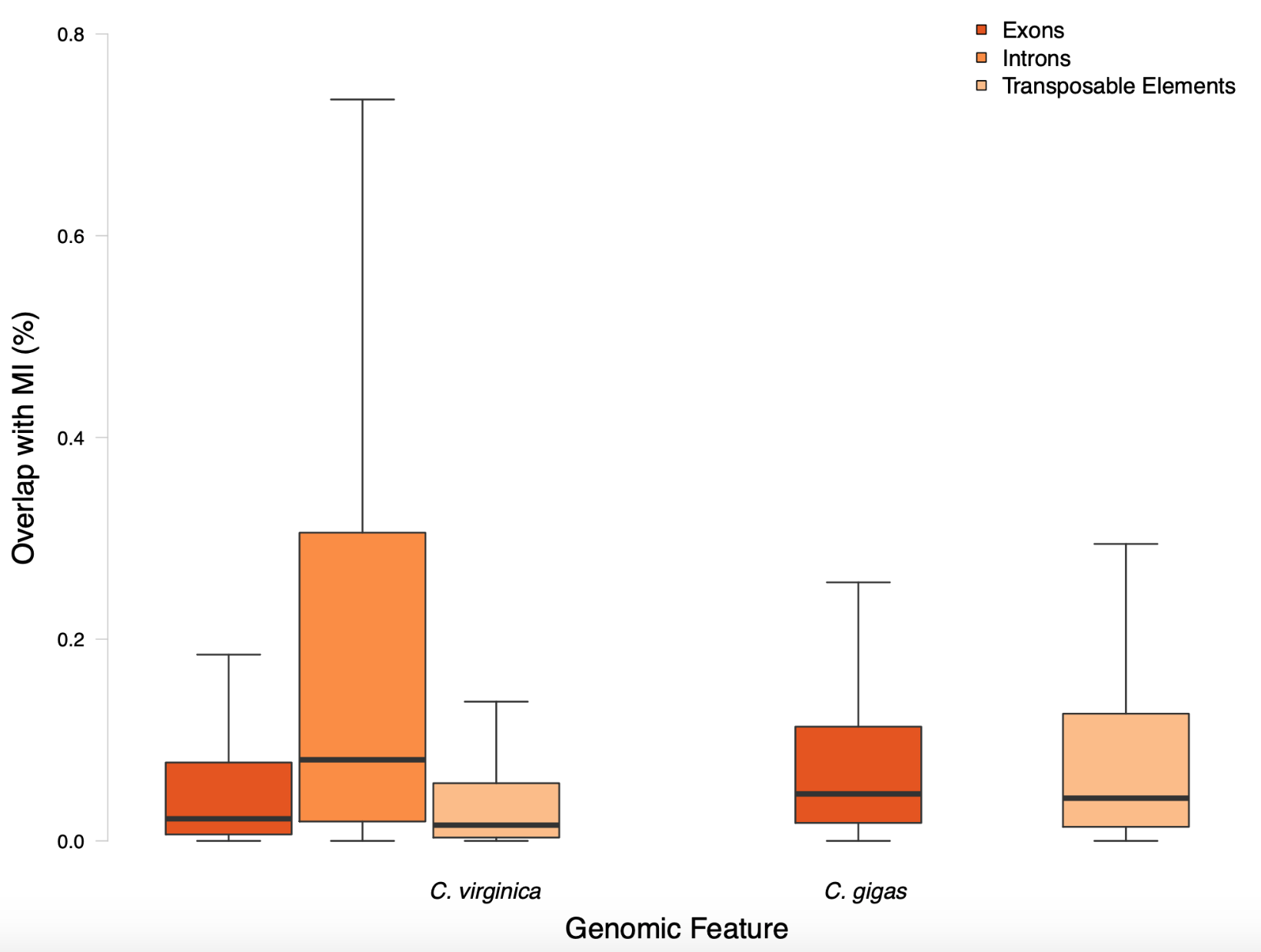 I think some of the differences are a little clearer in this boxplot. Time to move on from this analysis!