Initially, I wanted to test-run DSS and ramwas. I looked into the manuals for both packages, and wasn’t convinced that ramwas was a good fit for my data. I could associate methylation information with genotype data, which seemed valuable. However, my genotype data came from BS-Snper analyses with my WGBS data, and looking for associations between WGBS and WGBS-derived genotype data didn’t make sense to me! Instead, I focused on using DSS to identify differentially methylated loci.

DSS uses a Bayesian hierarchical model to estimate dispersions, then uses a Wald test for differential methylation, to calculate CpG methylation in a general experimental design. I was interested in using this package because I wanted to test pH and ploidy simultaneously, instead of using each variable as a covariate in my analysis! Coverage data (i.e. count data) are modeled using a beta-binomial distribution with an arcisne link function and log-normal priors, and the model is fit on the transformed data using the generalized least squares method. A Wald test is used at each CpG site for statistical testing. The test itself depends on sequencing depth and a dispersion parameter. This dispersion parameter is defined by a shrinkage estimator from the Bayesian hierarchical model. After conducting the Wald test, I can define DML based on p-value and FDR thresholds.

According to the package creators, this method is better than the Fisher’s test used by methylKit. With the Fisher’s test, read counts are added between samples in a treatment (think unite). By doing this, the test assumes that data in each sample are distributed in the same way, and obscures any variation between samples in a treatment. Based on the data I’ve seen from methylKit, the data do have similar distributions, but I have seen certain samples look like outliers in the PCA. Retaining the biological variation in each treatment with the dispersion parameters seems like a good step in the right direction.

Another thing DSS does while modeling is smoothing, which involves using information from nearby CpG sites to better inform methylation calculations at a specific CpG site. The manual made it sound like smoothing was always recommended to improve calculations, but the paper only suggested using smoothing when the data is “dense” and there are CpG sites closeby. This immediately made me think of differences between the vertebrate and invertebrate methylation model. It’s not likely that I’ll have many CpGs nearby to estimate methylation information, so I decided not to use any smoothing.

Oh, did I mention that DSS was designed to be less computationally intensive? Very important.

The first step of my analysis was installing packages on mox to use with the R Studio server! I needed to install DSS and its dependency bsseq. At first, I opened a build node and tried installing the packages that way, but I ran into continual errors. I then tried to install the packages from the R Studio server interface itself, and ran into similar issues. Turns out Aidan was having similar issues and posted this discussion. Sam mentioned that if we wanted to install packages to use on the server, we needed to create our own singularity container.

I followed Sam’s instructions in the handbook to create a singularity container. First I created a definition file:

I then created the script r_packages_installs.R to install specific R packages, like methylKit, bsseq, and DSS: 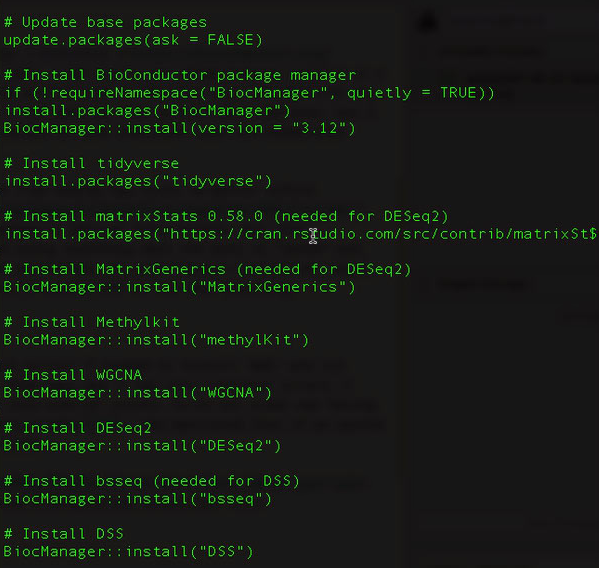 After logging into a build node, I loaded the singularity module and built the container rstudio-4.0.2.yrv-v1.0.sif. Finally, I modified my R Studio SLURM script, found here, to call my new singularity container! I think I ran into some errors later on because my singularity container was in my login node instead of somewhere wiht more storage, but that didn’t seem to be the sole cause. There might be something weird with my container or SLURM script, but it didn’t fully affect my ability to do the analysis.

To work through this analysis, I relied heavily on the DSS manual! I pasted the code that ran on the R Studio server into this R Markdown script so it was easier to follow.

First, I modified my merged coverage files from bismark to fit DSS input requirements. Each sample needed a corresponding text file with chromosome, position, read coverage, and reads methylated, and required a header. For position, I used the start of the CpG dinucleotide.

To import multiple files into R Studio, I used a method with list2env I found two years ago:

Once I had the data in R Studio, I created a BSseq object (this is why I needed the bsseq dependency). This object is just a large conglomeration of coverage information for each sample and sample ID:

To fit the general linear model to the data, I used the DMLfit.multiFactor function, which allowed me to specify a model with ploidy, pH, and in the interaction between the two variables. After fitting the model, I checked the column names to 1) confirm that the model fit the variables I wanted and 2) see which condition was picked at the “treatment” condition (this usually occurs alphabetically, and luckily for me my treatments are L and T, which come after H and D):

One important thing to note is that I couldn’t select a percent methylation difference with a generalized linear model. The model doesn’t produce methylation values to begin with, and using multiple regressions makes it more complicated to return these kinds of values (see the FAQ here).

Looking at DML in IGV

Next step: look at DML in IGV! I opened this IGV session and added in DSS DML BEDfile tracks I produced in this Jupyter notebook. When I looked at the DML, it was easier to understand why some DML were called over others. I definitely ended up in a confusing/existential place: if we don’t quite understand what methylation levels really mean, can I look at a DML in IGV and make a judgement call as to what looks like differential methylation? I decided to keep my DSS DML moving forward, even if I couldn’t understand why certain loci were identified as differentially methylated.

Based on the differences I saw with methylKit and DSS DML, I was interested in what overlaps existed between the different sets. In this Jupyter notebook, I used intersectBed to look at those overlaps.

Table 1. Number of DML common between contrasts and methods. 25 DML overlapped between all DSS lists.

I found it interesting that only 1 DML overlapped between the different pH lists, and there were 3 common between the ploidy lists. This is probably a testament to the different methods used to call differential methylation (Fisher’s exact test vs. Wald test).

For each DSS list, I used intersectBed to look at genomic locations of DML in this Jupyter notebook.

Even though the number of DML are different between the two methods, the genomic locations are basically the same: most DML are in introns, followed by transposable elements. One thing that is important to note is that the percent of DML that overlap with C/T SNPs is much less with DSS than methylKit (~2% vs. ~20%).

So, I guess I just have multiple DML lists now? I’ll probably move forward with each list separately for enrichment analysis, then make some sort of decision after that. I will also need to find a way to construct a randomization test with DSS! My guess is that I could get results from that randomization test sooner rather than later, since DSS was less computationally intensive than methylKit.