And the pH is low (again)

On Thursday, I asked Laura to slightly increase flow to even out the pH. However, this decreased the temperature in my tanks. She tried to increase the setpoints, but they did not help much. When I asked Steven about the pH, he said to stop worrying about it and focus on temperature and food. On Friday, I asked Stuart to reduce the flow to the heating tank to 3 L/min so the oysters would get about 1.5 L/min of flow. He said he wasn’t able to get it exactly to 3 L/min, but it was close. Originally, the flow was at 8 L/min.

I checked the Durafet monitors when I got to the hatchery and saw that pH was hovering close to 7.5 again. 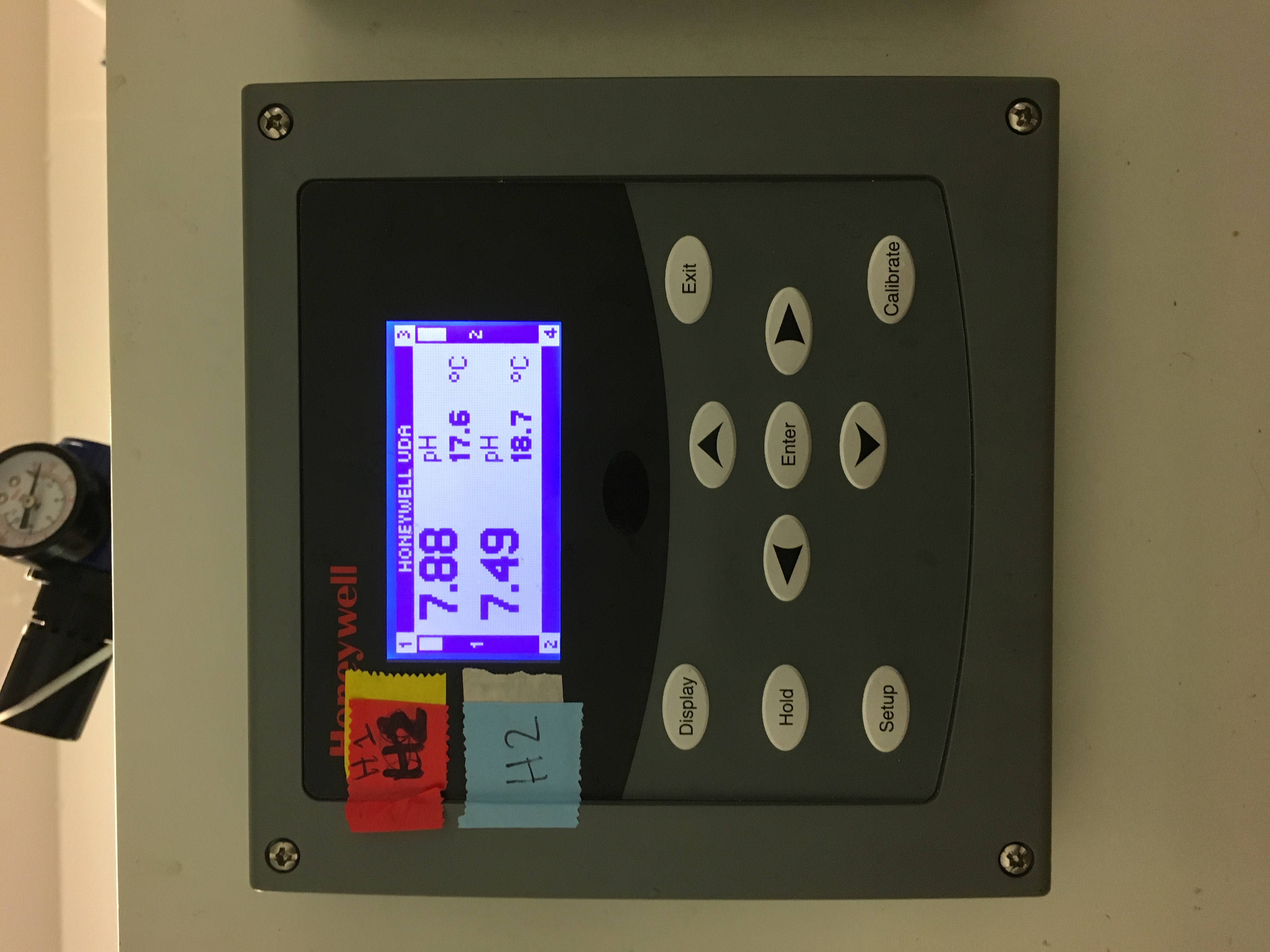 I checked the heater setpoints to see what Laura had set them to. I figured I could change them later in the day after I cleaned tanks. 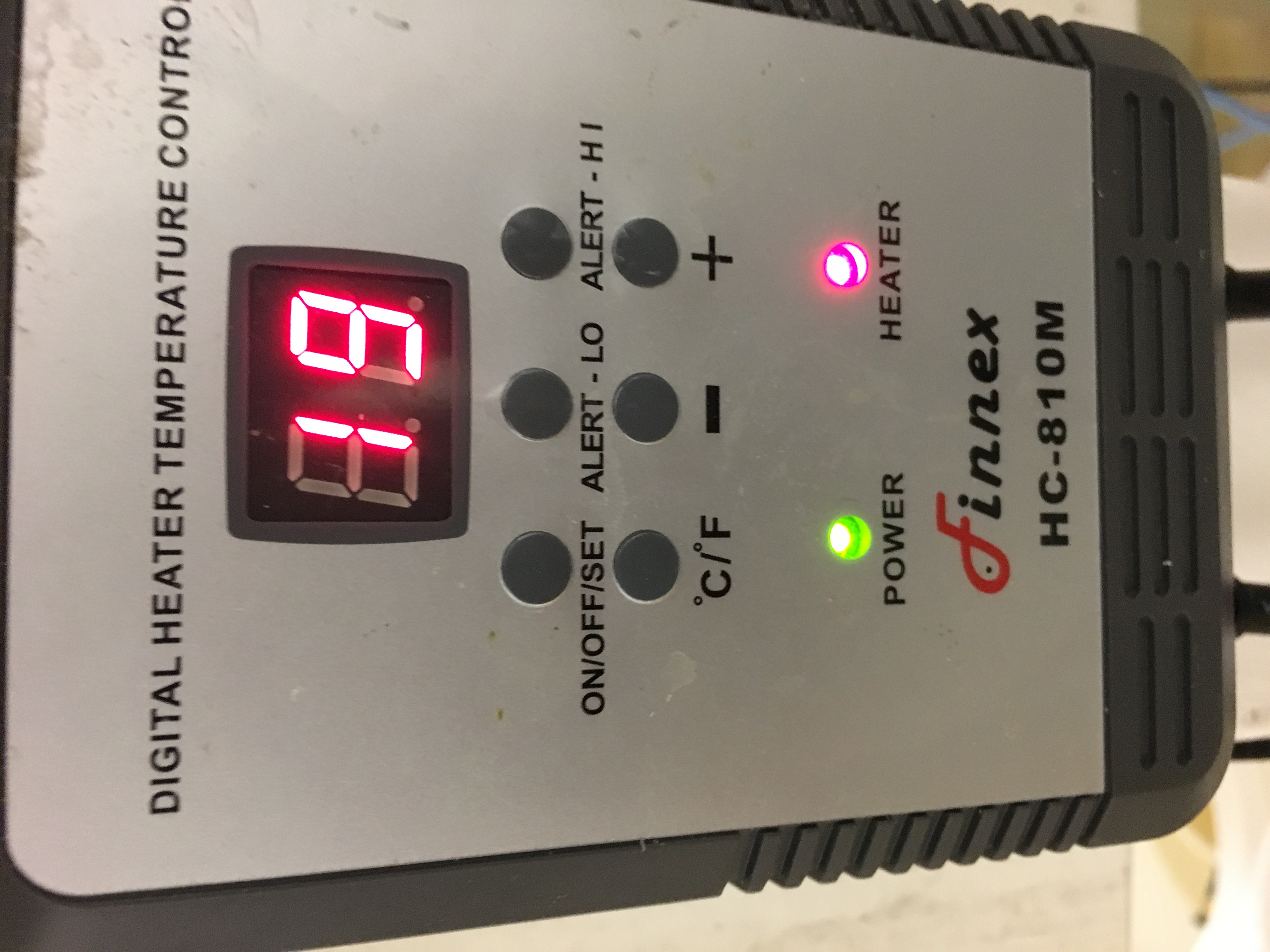 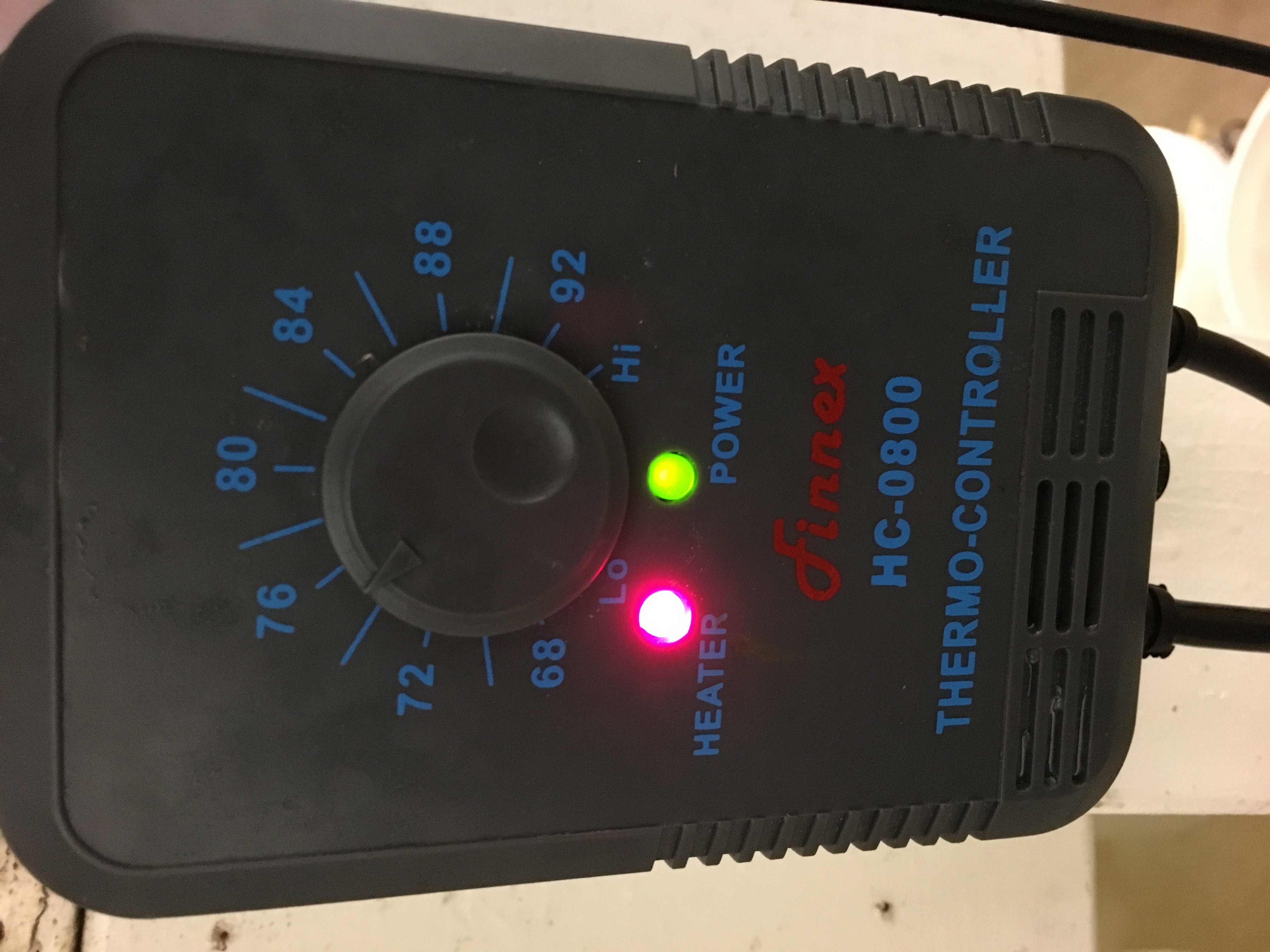 I first drained the oyster tanks and the heating tank and cleaned them with Vortex. While I was doing this, I also ran bleachwater through the algal line, followed by freshwater. After rinsing oyster bags with freshwater, I counted mortalities. I found two dead oysters: one from Tank 1A, and another from Tank 3A. Both were freshly dead.

By the time I finished cleaning and the tanks were filled with heated water, two hours had past. I put one tripour of algae in each of the oyster tanks to compensate. I then cleaned the algae header tank and filled it with 1500 mL of Reed’s paste and freshwater. I set the dosing rate at 40% so the oysters would be fed until someone else could refill the tank on Monday.

I set increased the setpoint of the left heater to 23 ºC and cranked the right heater up further. This seemed to heat the water to about 20 ºC, according to the Durafet monitor. 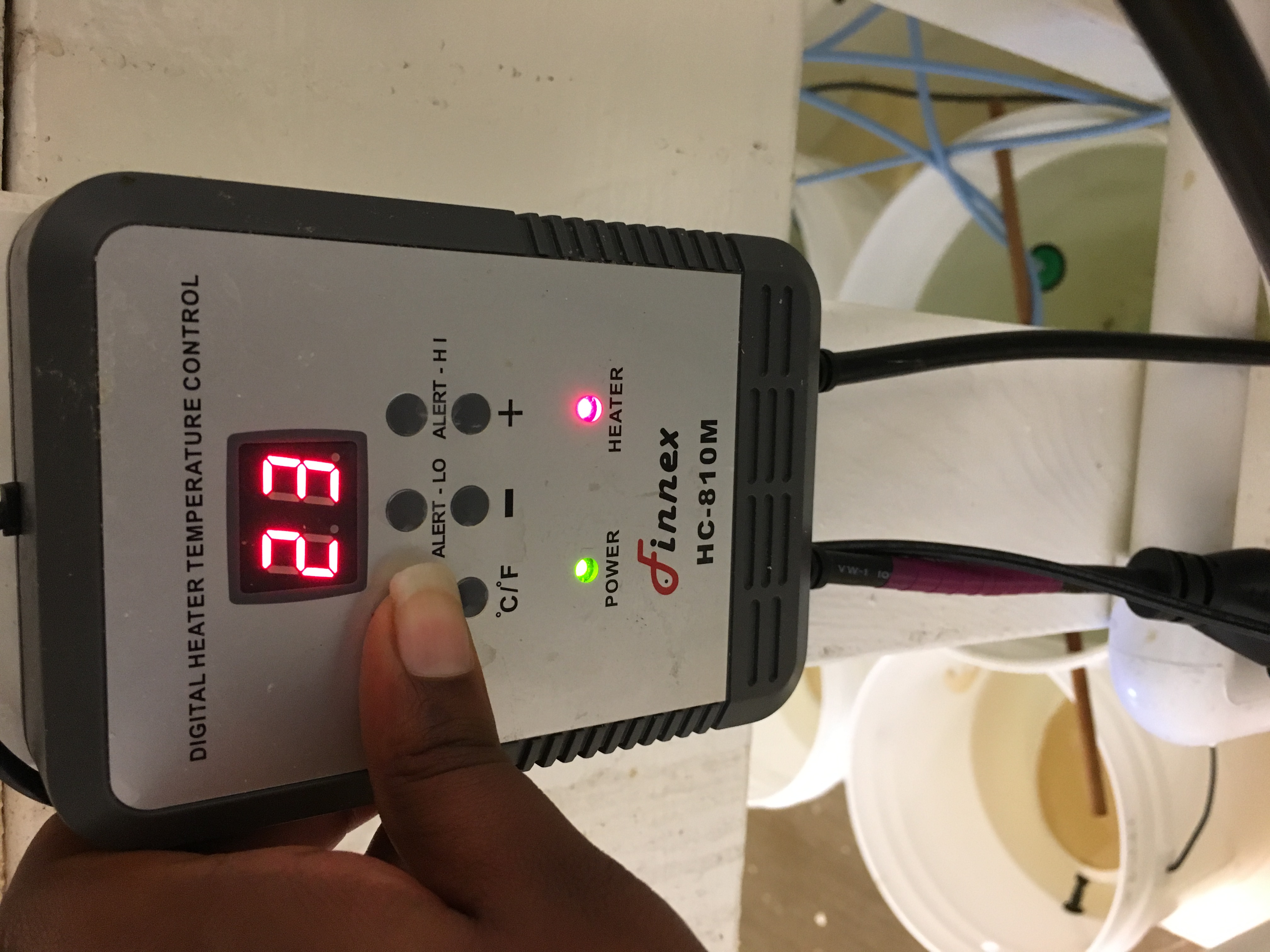 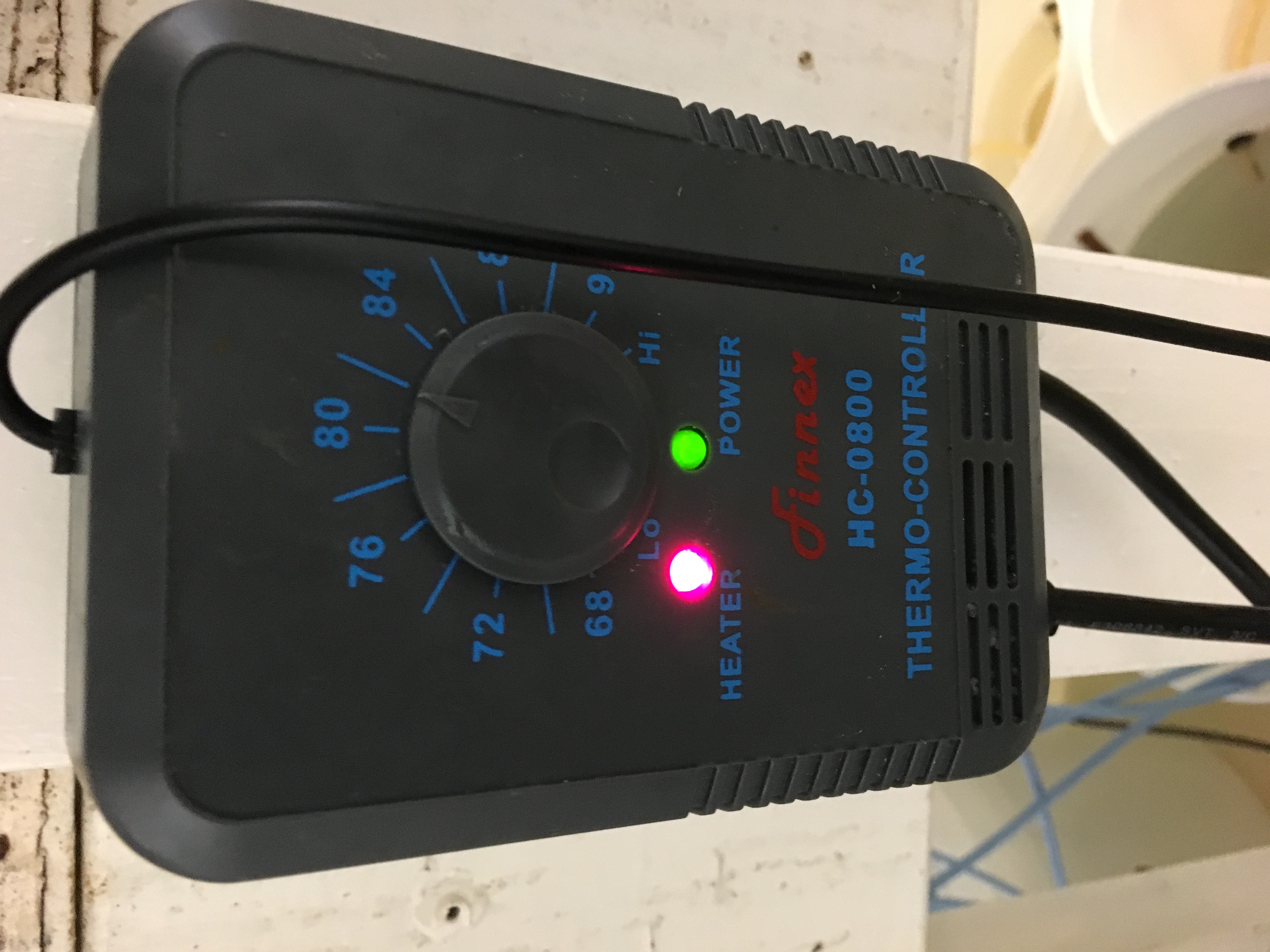 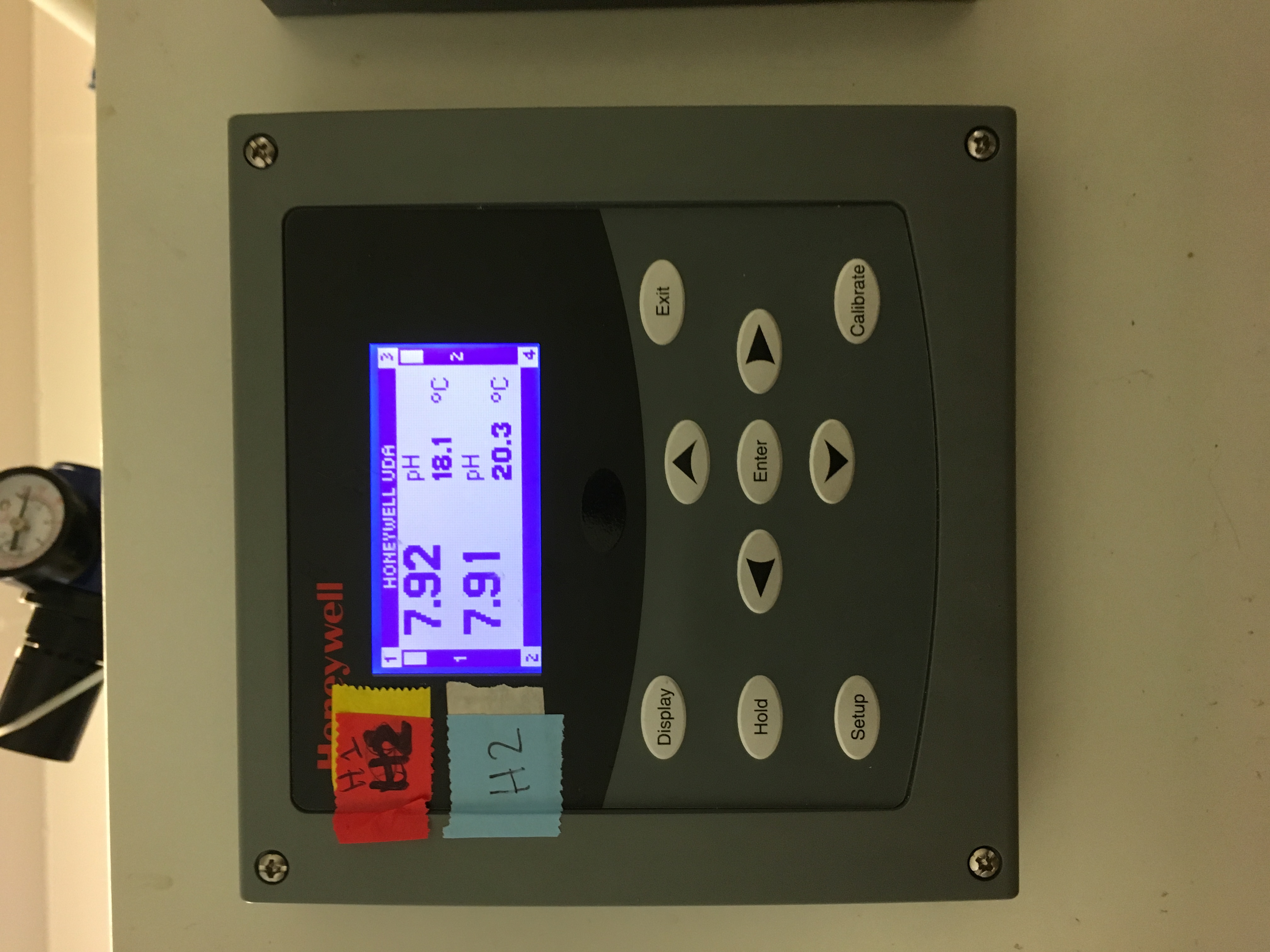 I also increased the airflow to all three of my tanks, hoping it would help with mixing. I also equalized the water flow to about 325 mL in ten seconds, or 1.95 L/min. 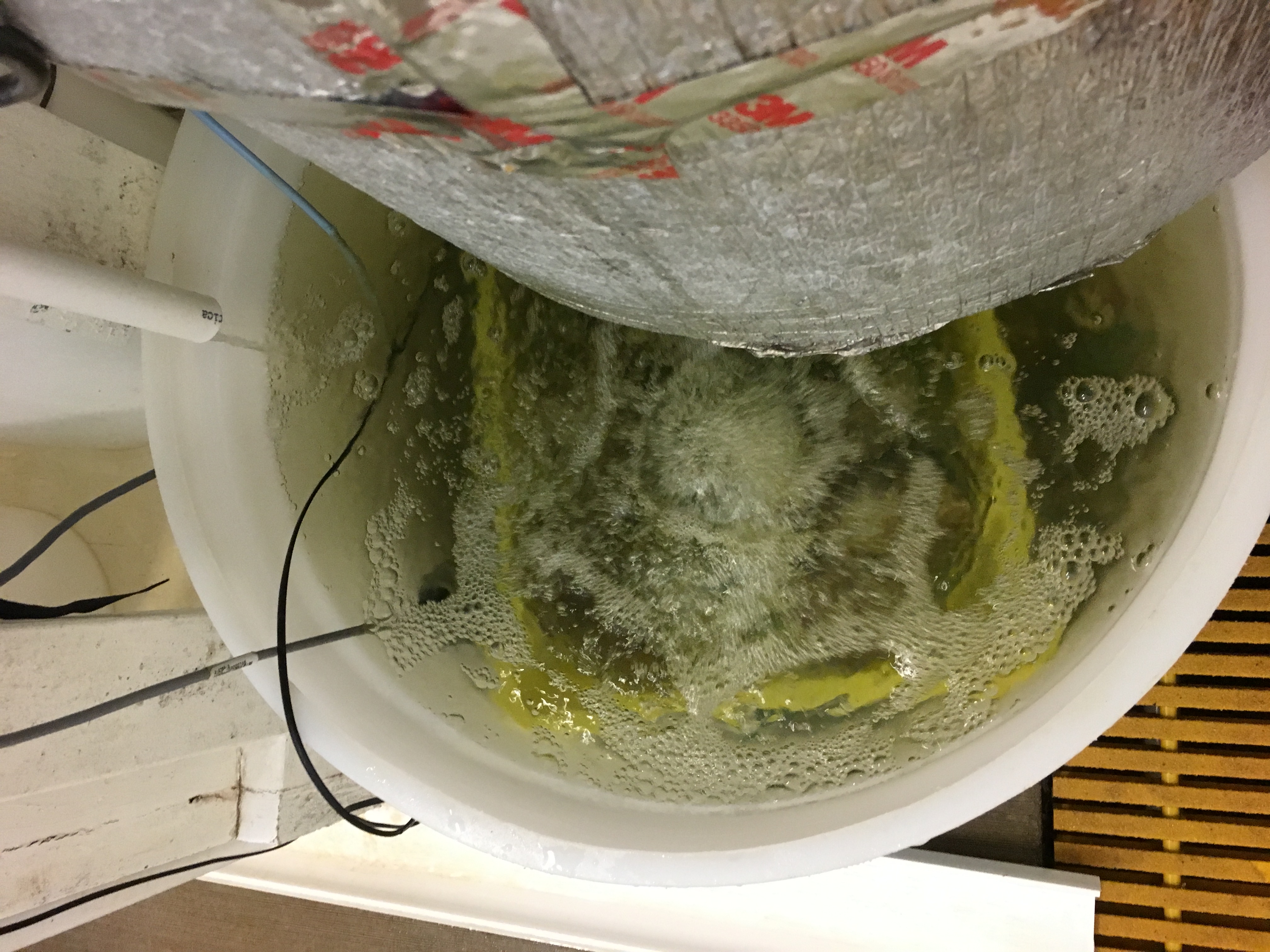 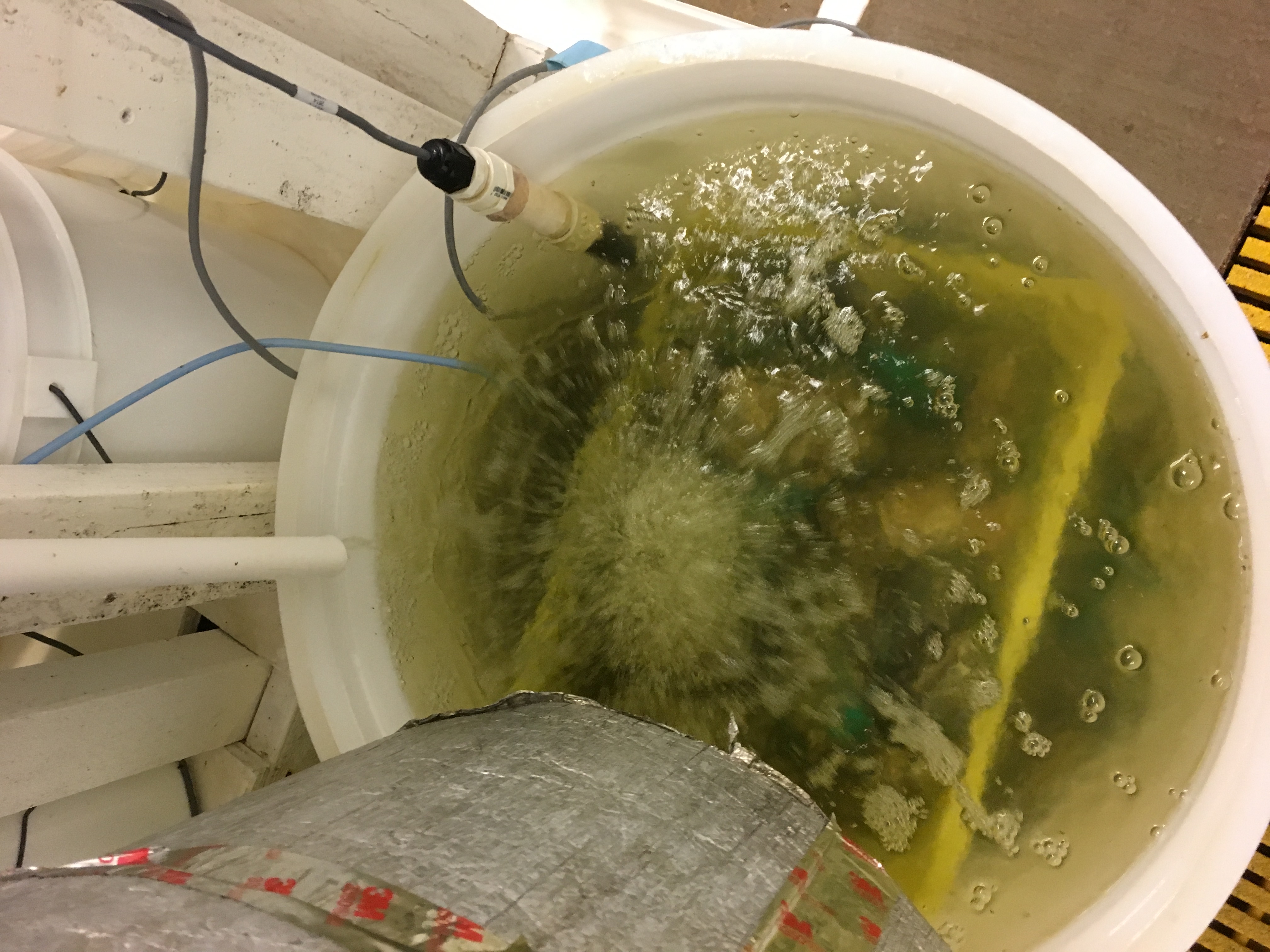 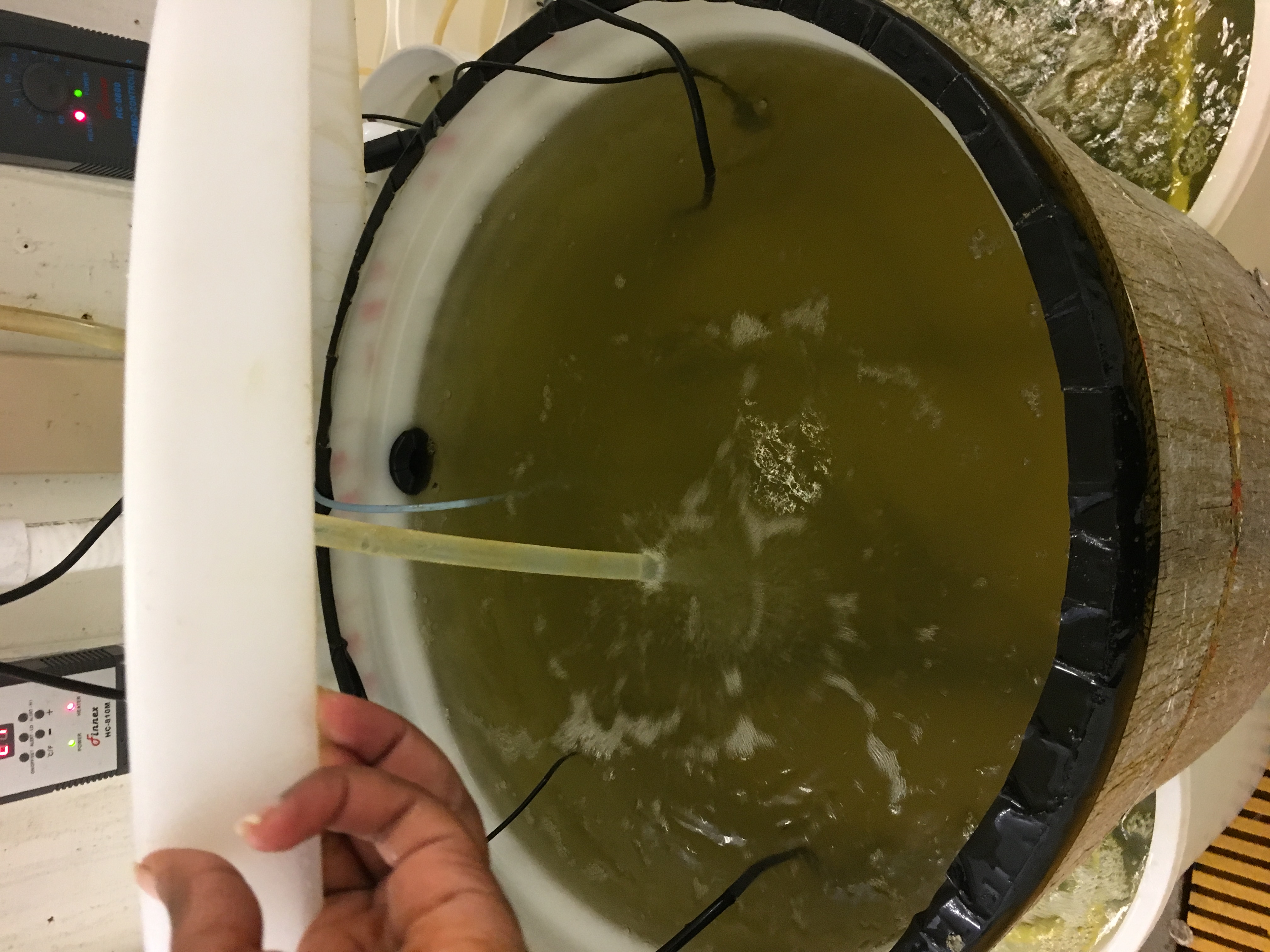 Steven also suggested moving the oysters into shallower and larger kiddie pools to increase the surface area for gas exchange. Before I can place oysters in them, I needed to condition them by soaking them in seawater. Laura helped me fill a setting tank outside with seawater, and I placed the four kiddie pools in there. 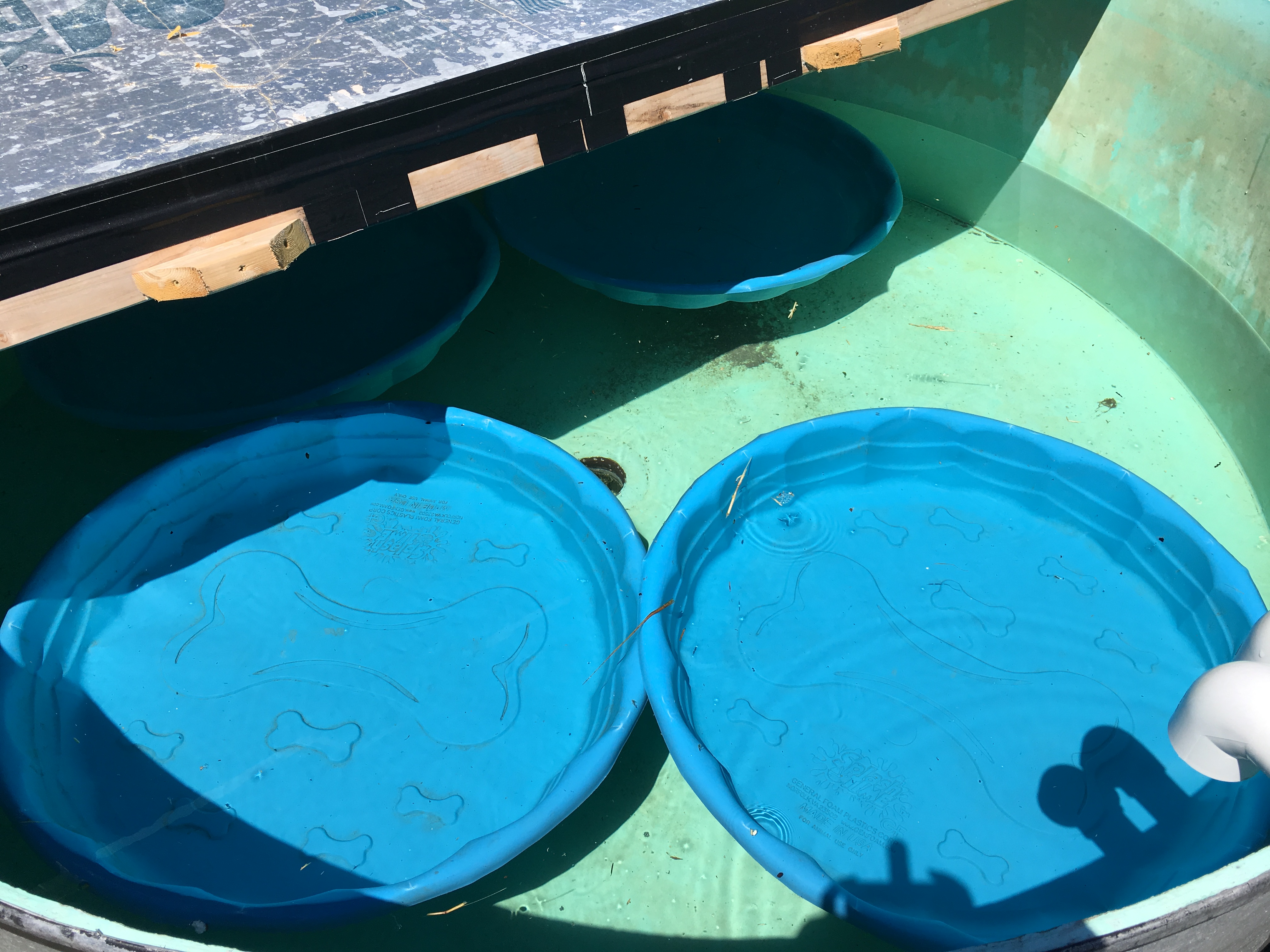