The past few days I’ve seen a string of mortalities, primiarly in conditioning Tank A.

Grace vacuumed the oysters and checked for mortalities while she and Laura were out there. She found three dead oysters: 1 from Tank 1B, 1 from Tank 1A and 1 from Tank 5A. Tank 5A had been dead for a few days, while Tank 1B and 1A were freshly dead. 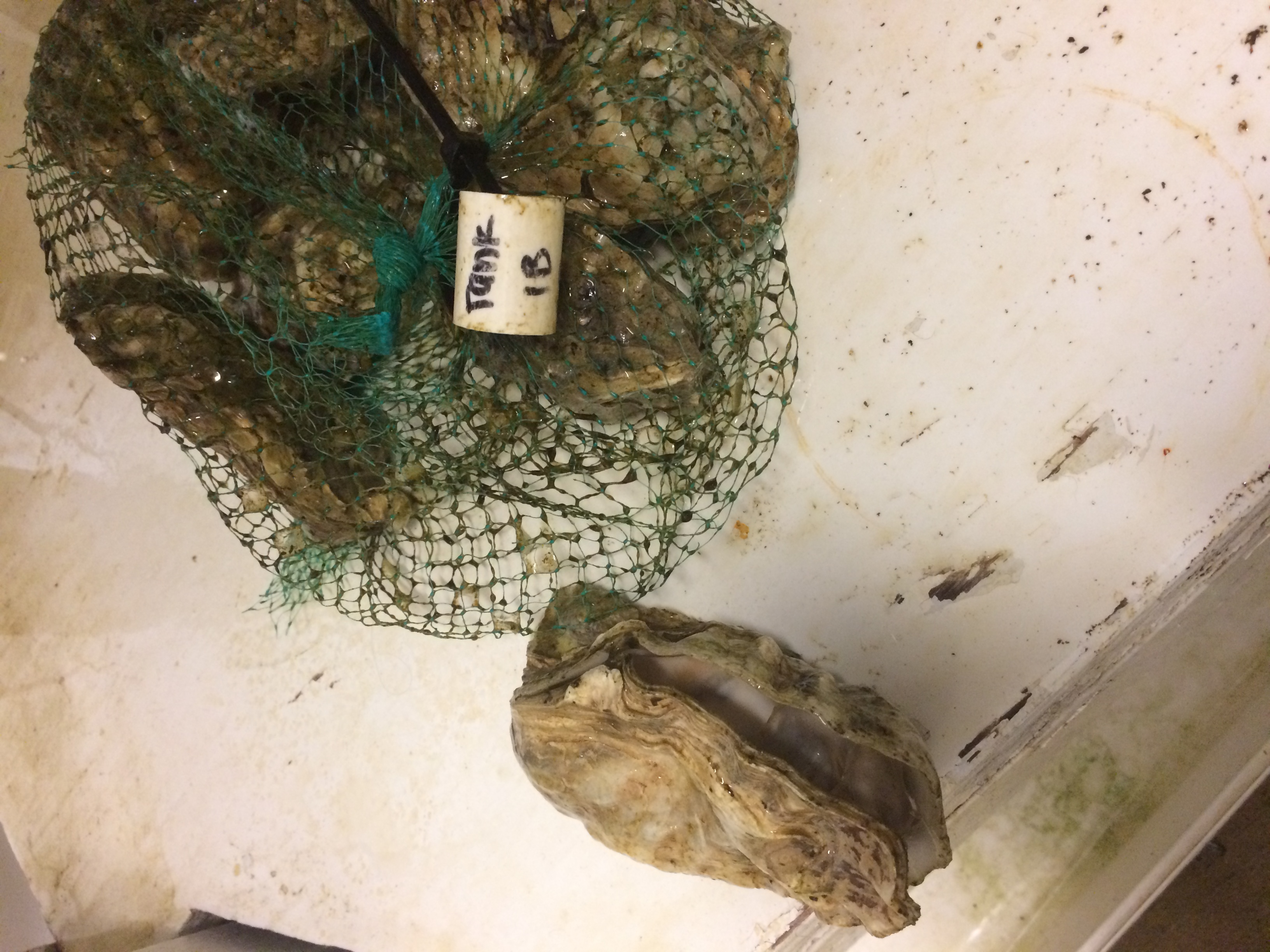 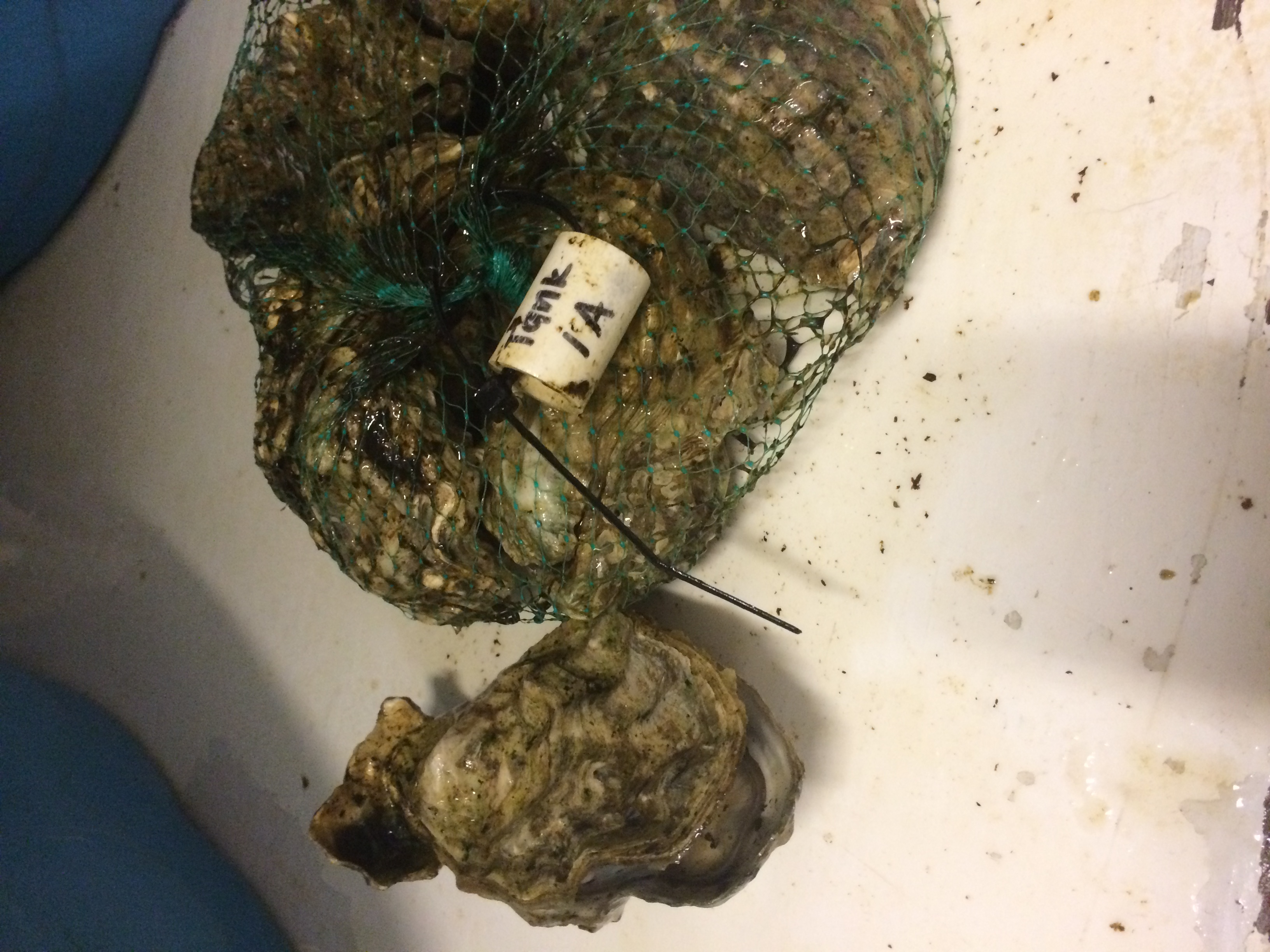 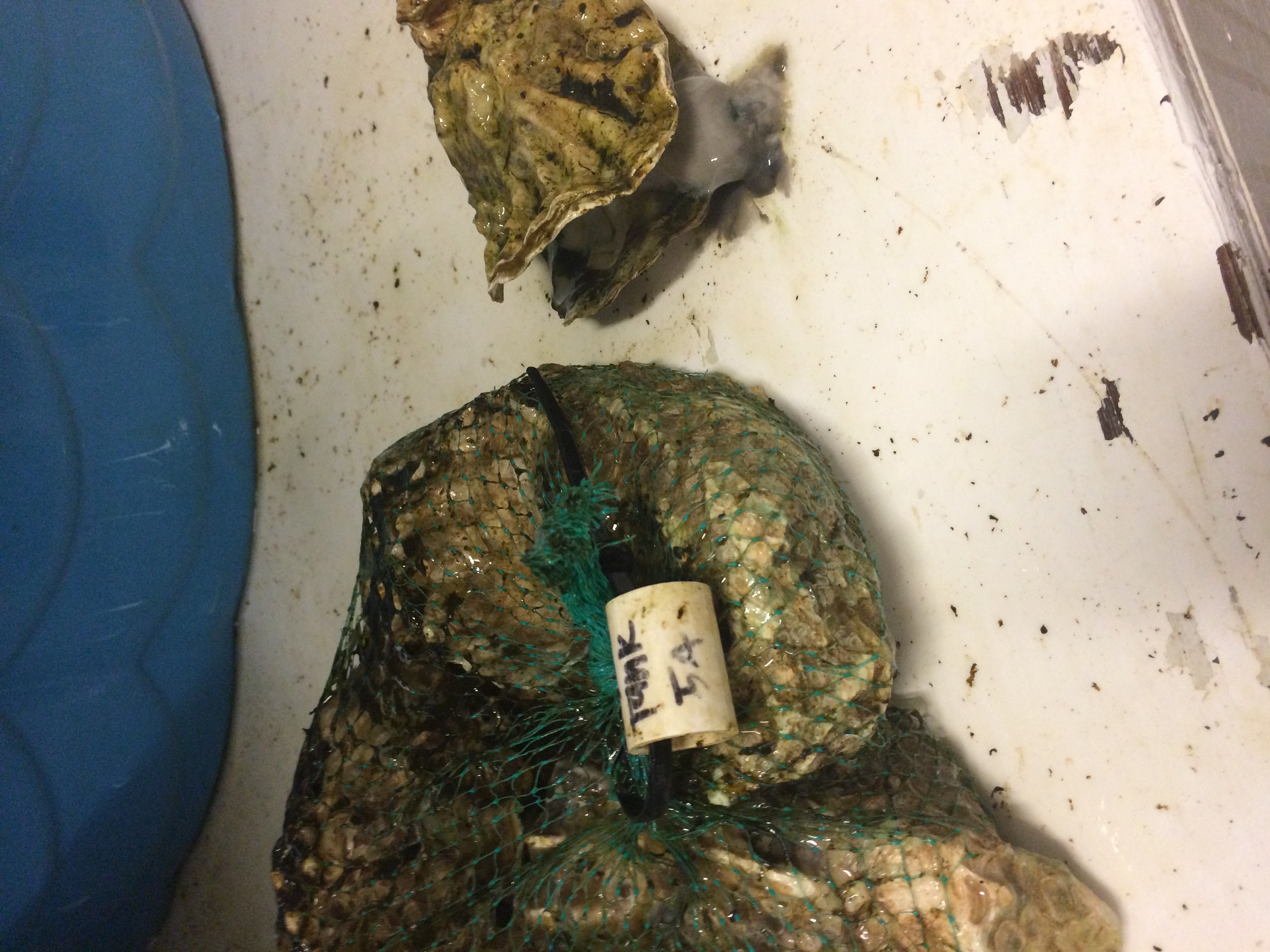 Laura cancelled at the last-minute on Saturday, so I took her car and went to Manchester. When I got there, all of her larval buckets were brimming, about to overflow. I replaced the banjos then cleaned the ones I took out. I also checked the heater setpoints. 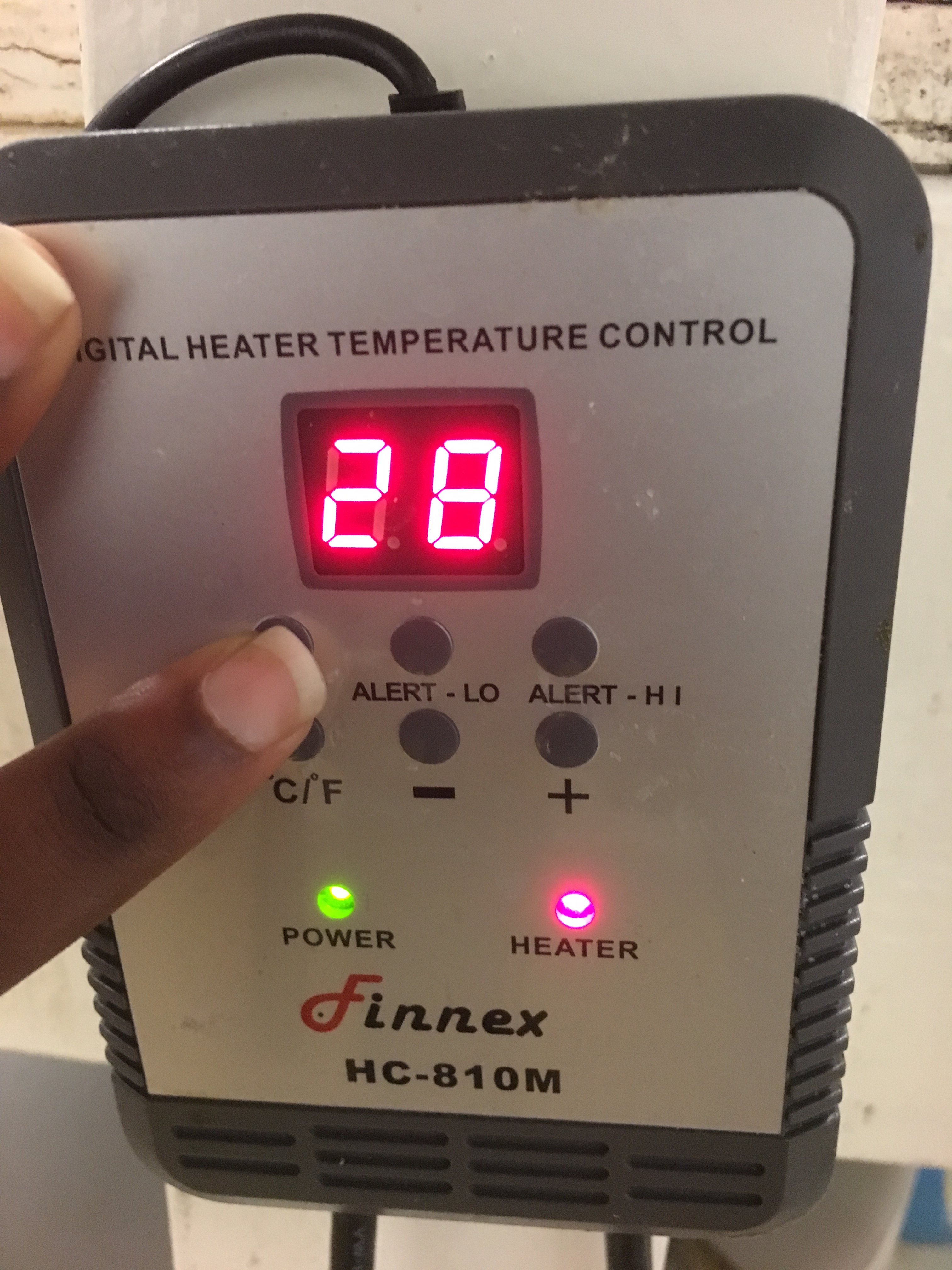 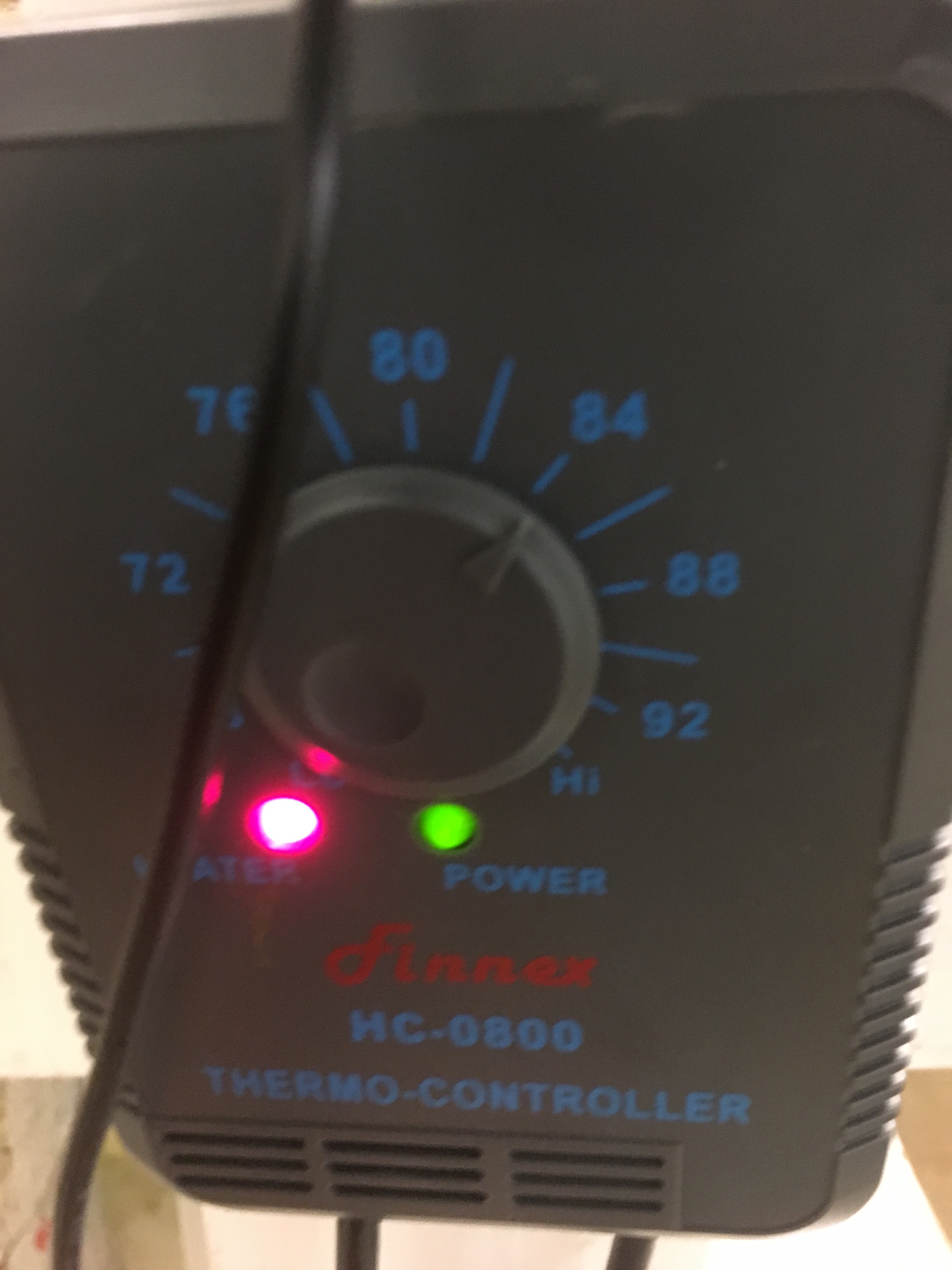 I then started on cleaning my oysters. I immediately noticed that the oyster bags themselves were collecting a lot of fecal matter and algae. Most of my time vacuuming was spent vacuuming the bags. Next year, it may be better not to use these bags and opt for something like a tray that can be removed and cleaned. There were three dead oysters: 1 from Full Amb B and 2 from Tank 3A. When I looked at their gonads, they were milky. Even though my oysters have been consistently dying, they’re also consistently ripe. I need to start sexing them soon and checking for active sperm. 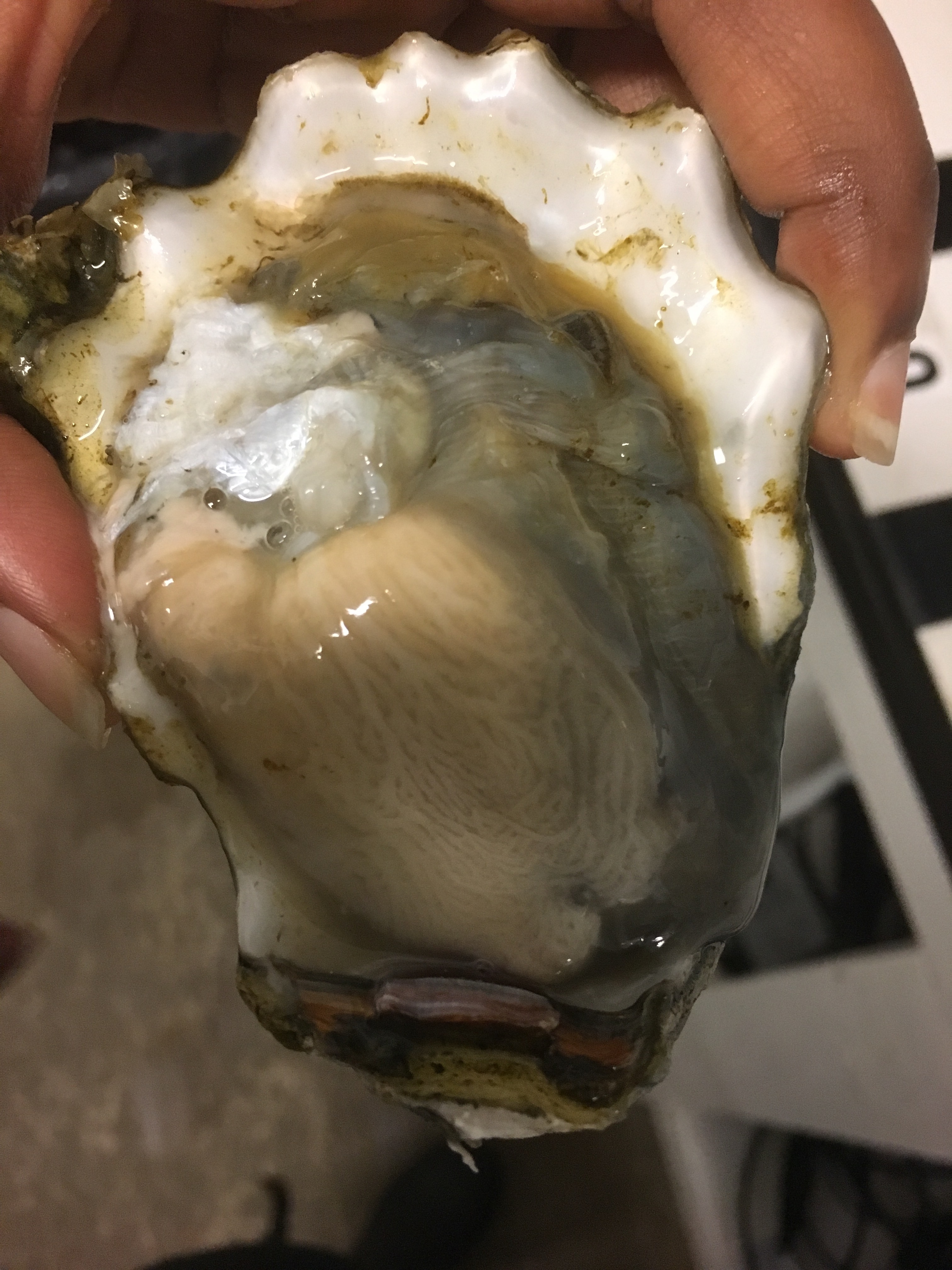 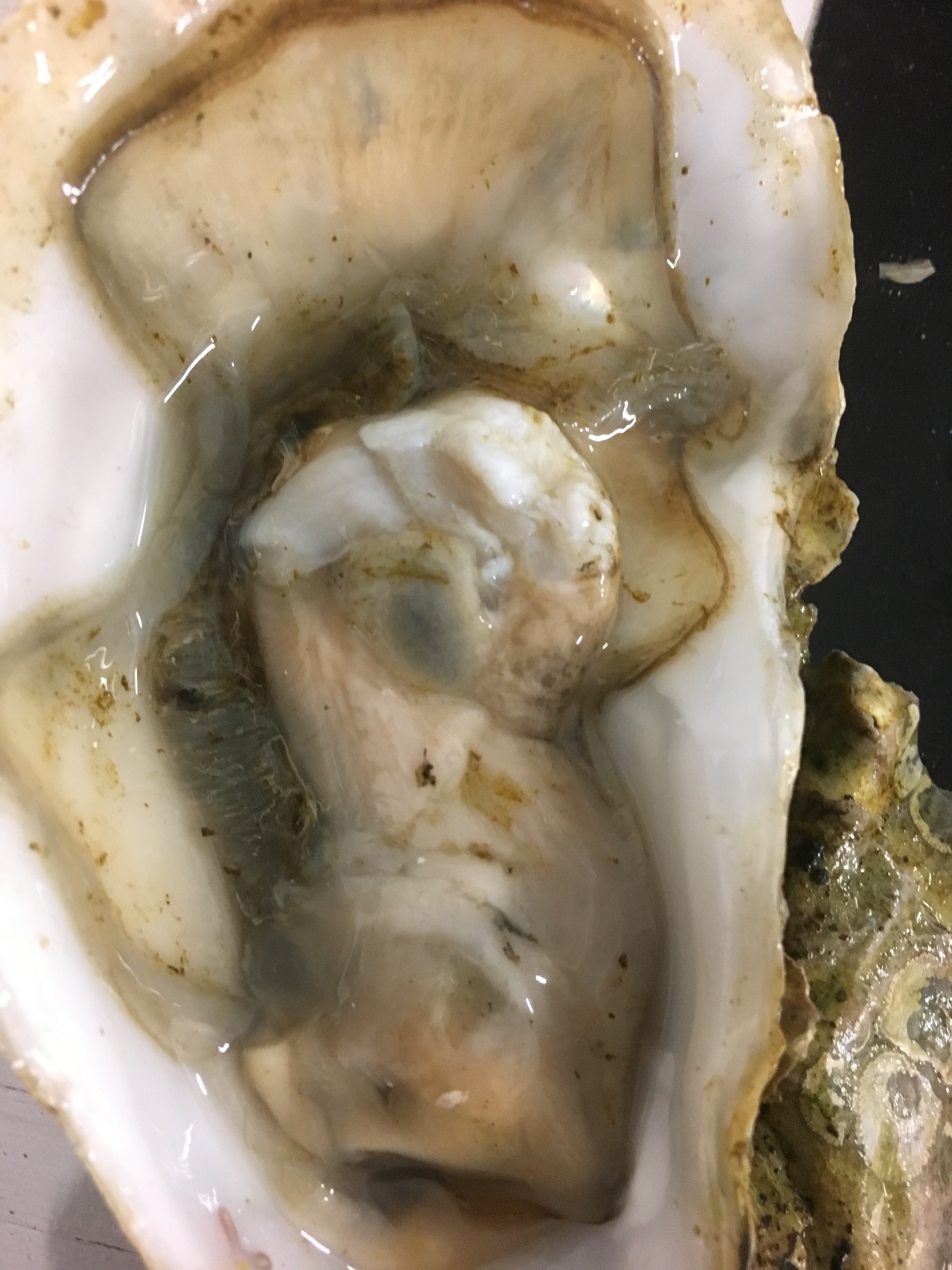 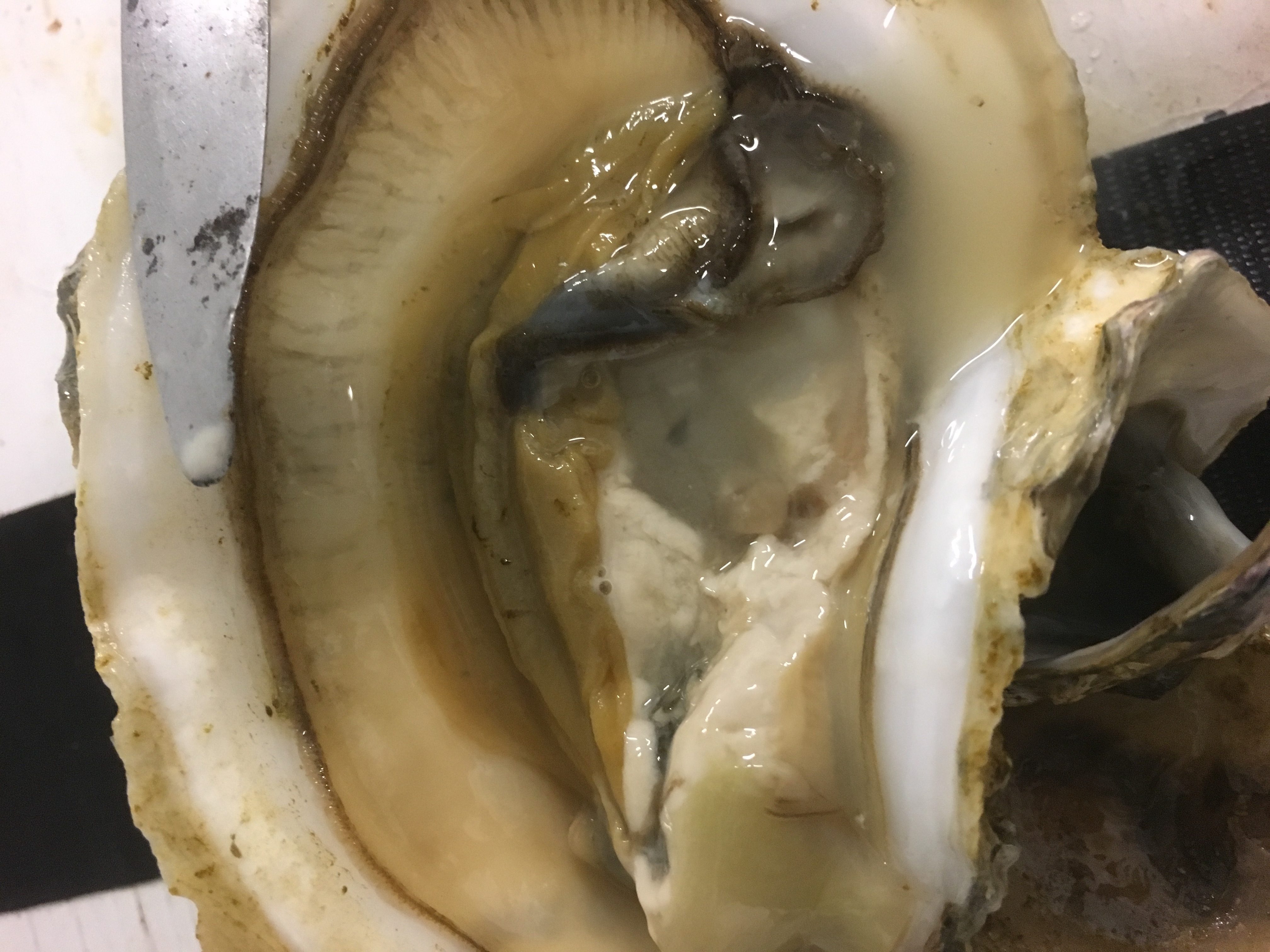 Because of the mortalities, I reduced the right heater setpoint. 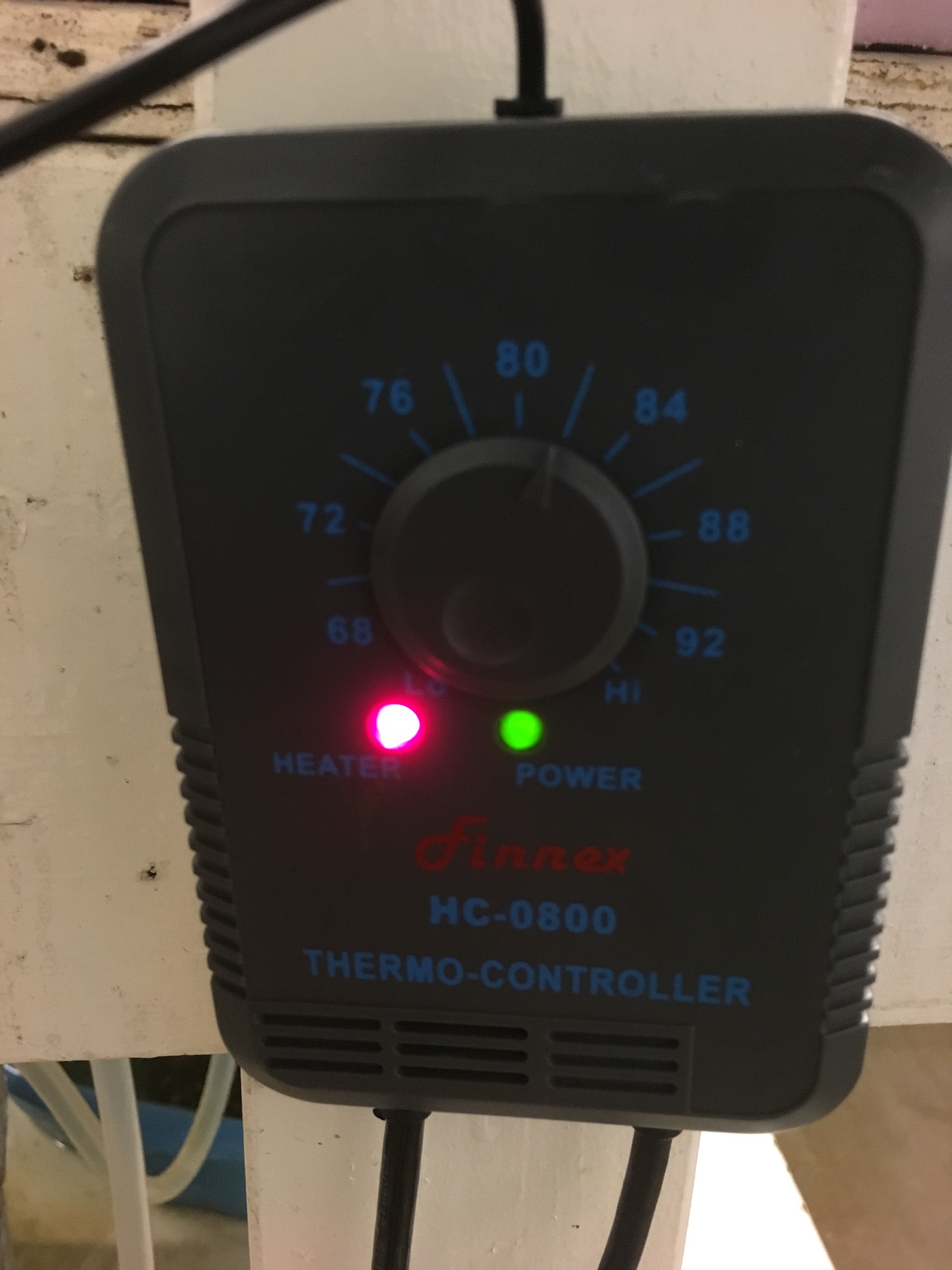 I continued my cleaning kick and rinsed Laura’s downwellers with freshwater. I then fed her algae tanks a mix of C.iso and Chagra and checked that the dripper was working. I then added 1.6 L of Reed’s paste to my algae header tank and turned off the dosing pump so I could clean the heating tank.

When I opened the algae heating tank, it looked and smelled like a swamp monster graveyard. The entire tank was filled with dense clumps and string of algae. I think algae had been growing (and dying) in the heating tank before being fed to the oysters. My guess is that this was causing some of the oyster deaths. 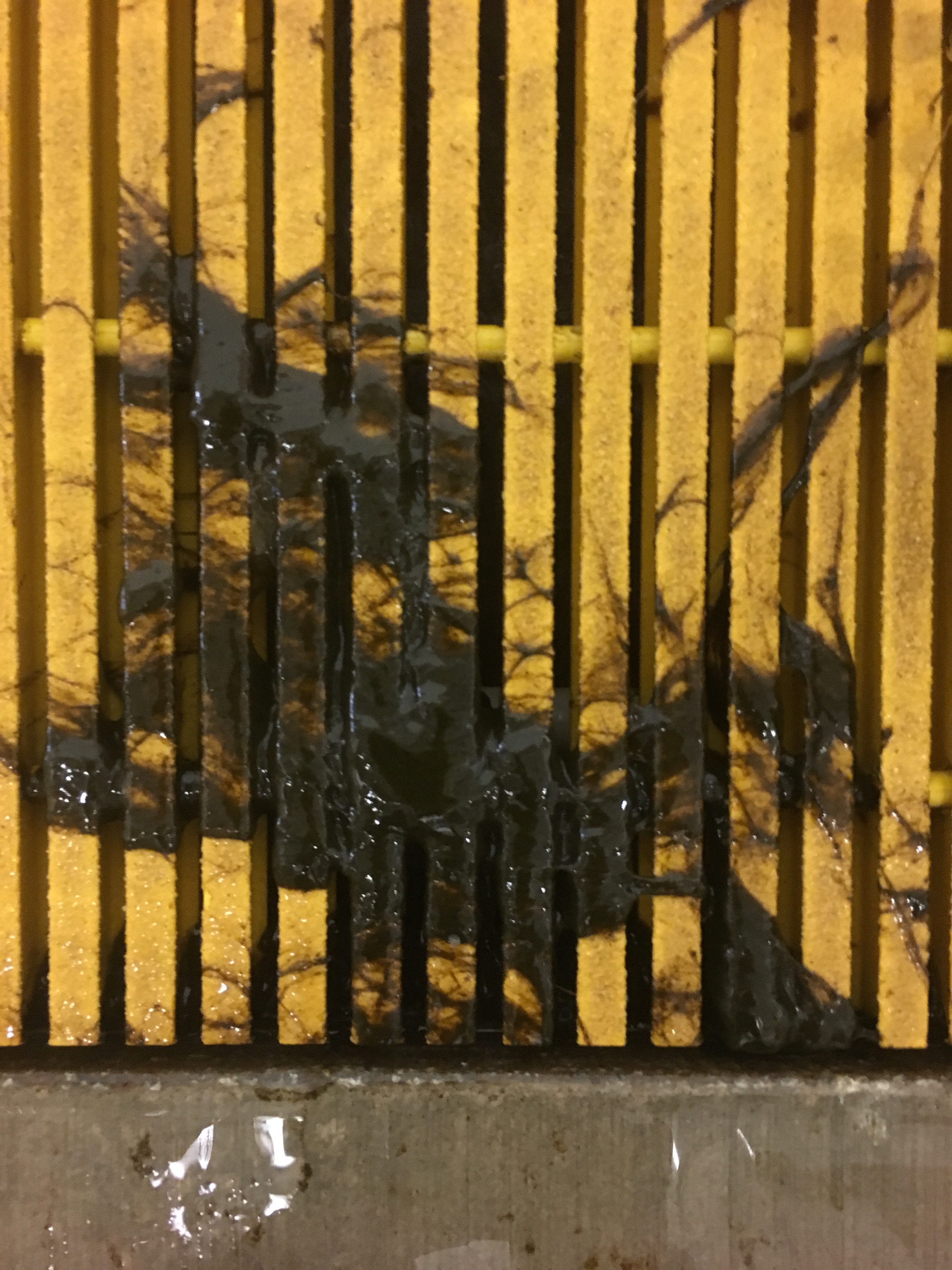 Figure 10. An example of what was growing inside the heating tank.

As I was cleaning the heating tank, I also wanted to flush algae from the water line. When I increased flow from my heated line, I noticed there was no water. I called Laura and saw that her outside tanks were also getting no water. The water shut off at some point while I was eating lunch, so it wasn’t off for more than an hour. Luckily, Rick stopped by the hatchery at that time. He discovered that the float valve in our seawater reservoir tank in the warehouse had been jammed in a way that prevented water from flowing. He was able unjam it and get water to flow again.

Another thing I noticed on Friday was that the two tanks had a 1.5ºC-2ºC difference in temperature. After cleaning the heating tank and pipes feeding water to the kiddie pools, I visually adjusted flow so they looked equal in both tanks. I checked the AVTECH monitor and saw that temperature in both pools were within 1ºC. I had to catch a ferry and didn’t have time to measure flows. I set the dosing pump to 60% and ran out the door.

Laura went out to Manchester so she took a look at my oysters. The first thing she found was a high number of mortalities: 2 from Tank 3A, 2 from Full Amb A, 1 from Tank 5A, 4 from Tank 4A, and 1 from Heat Shock B. She also saw that the pools were extremely dark when she got there and the food was completely dark. This means that in 24 hours, the oysters were fed 1.6 L of Reed’s paste. It’s possible that they were suffocated by their own lunch. 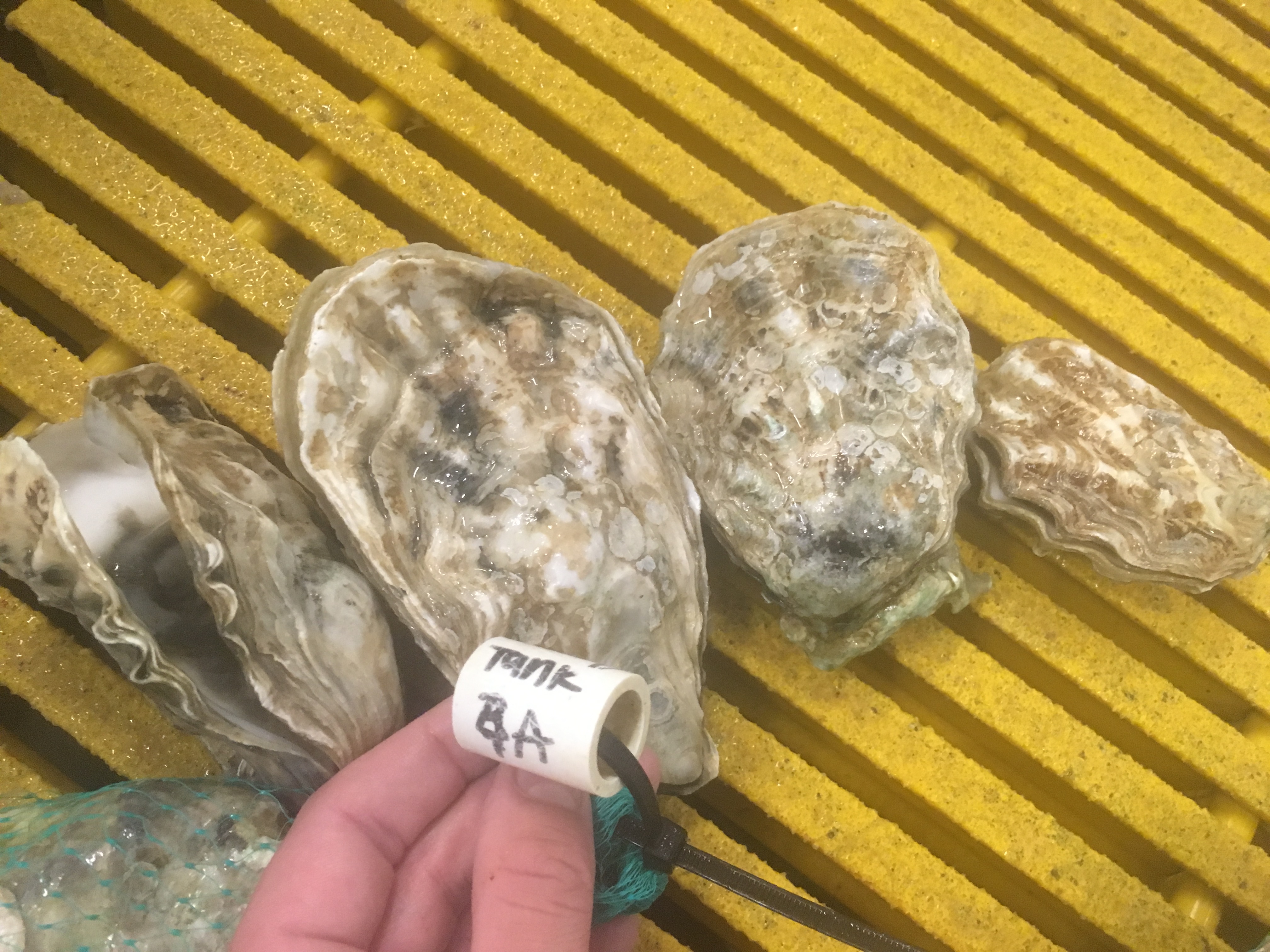 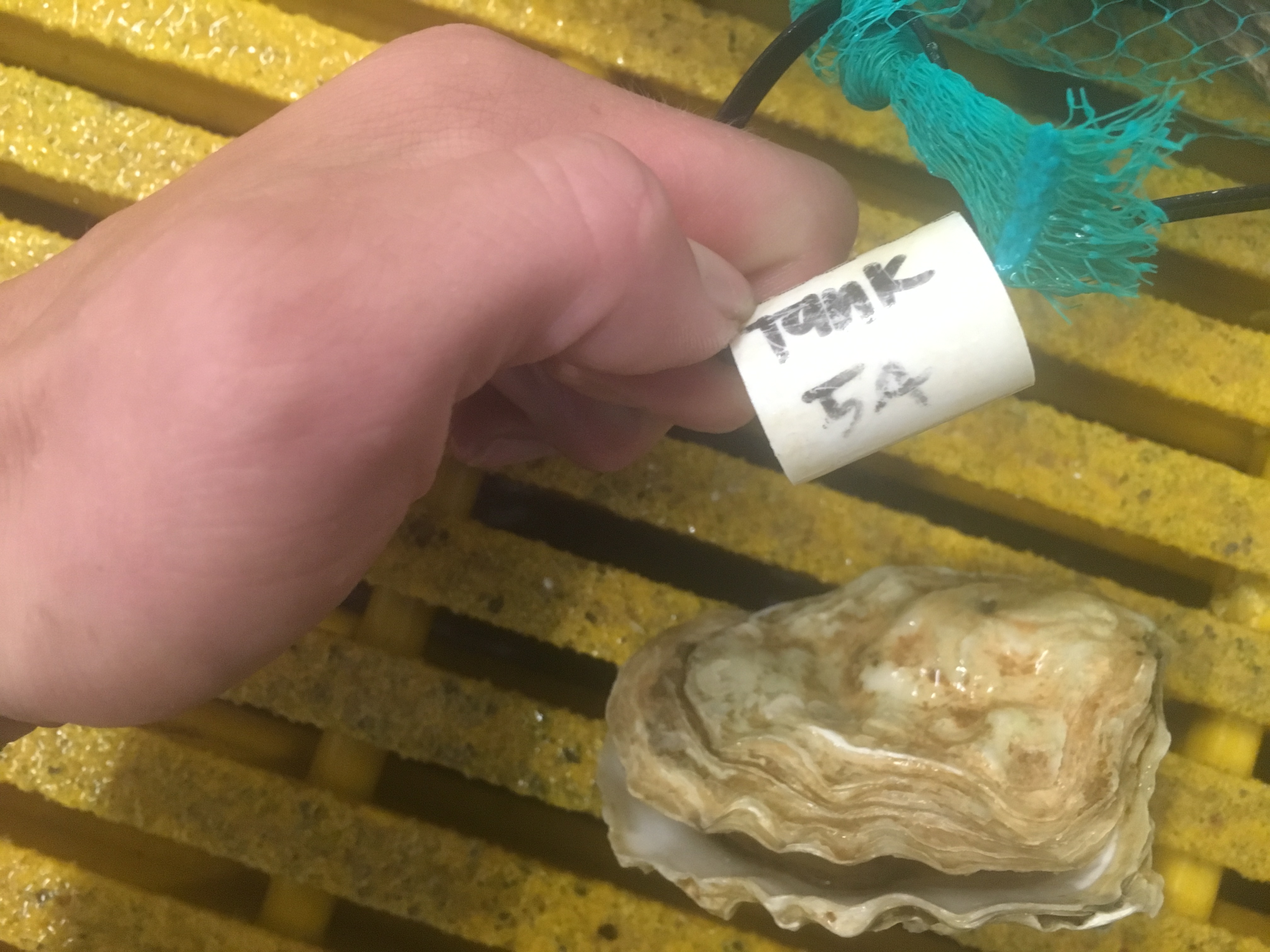 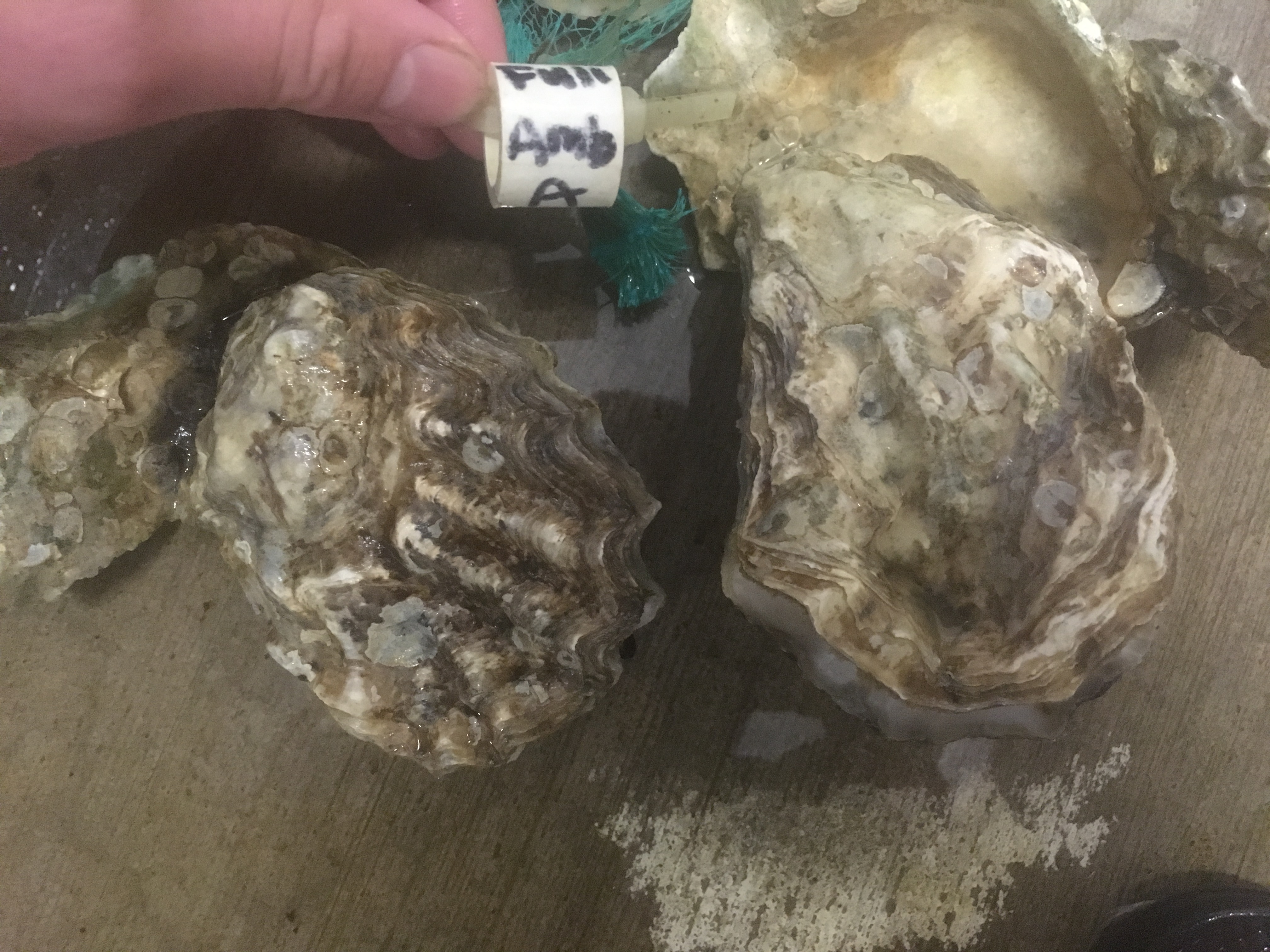 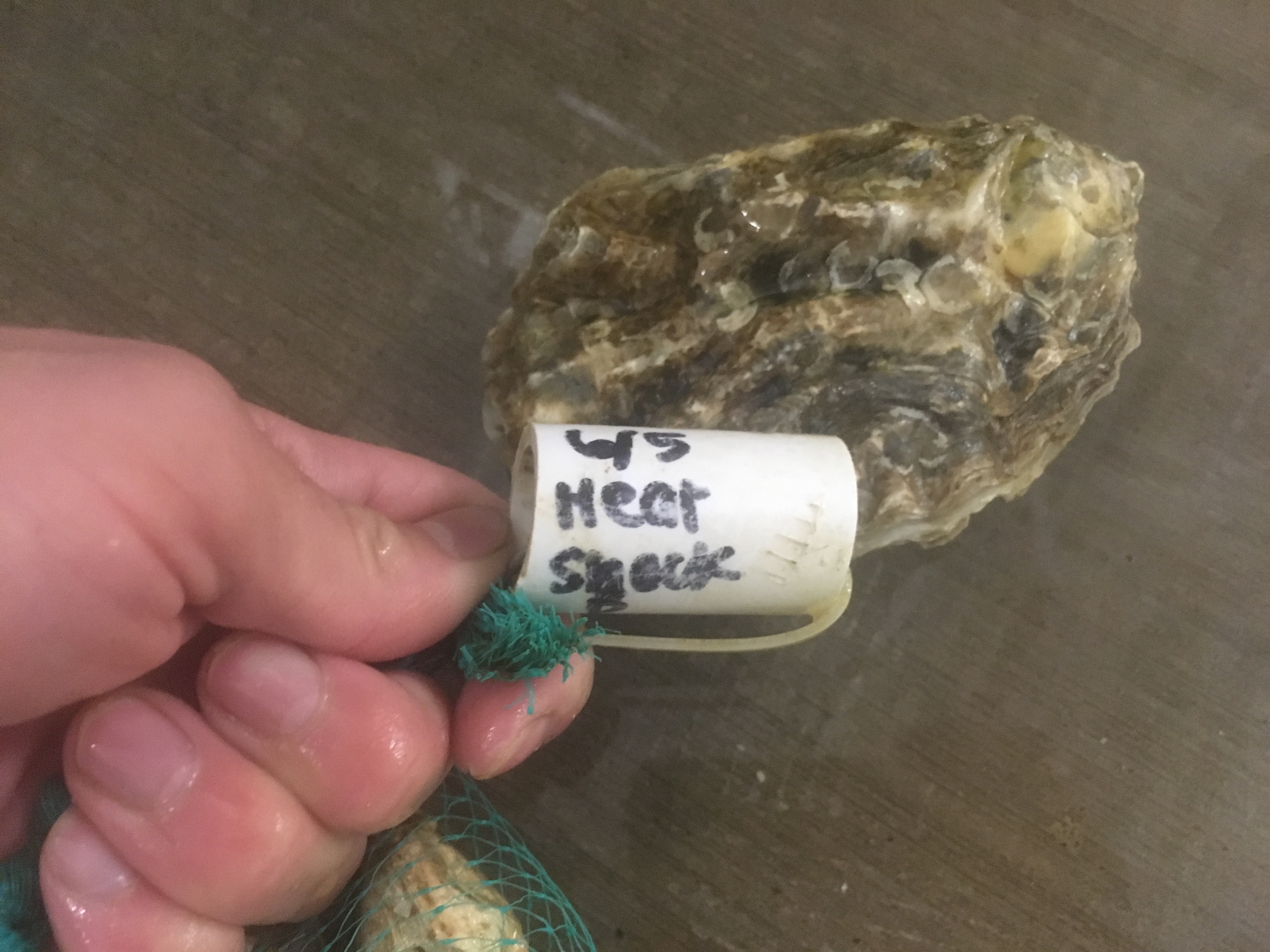 I also had her open the oysters that were recently dead. 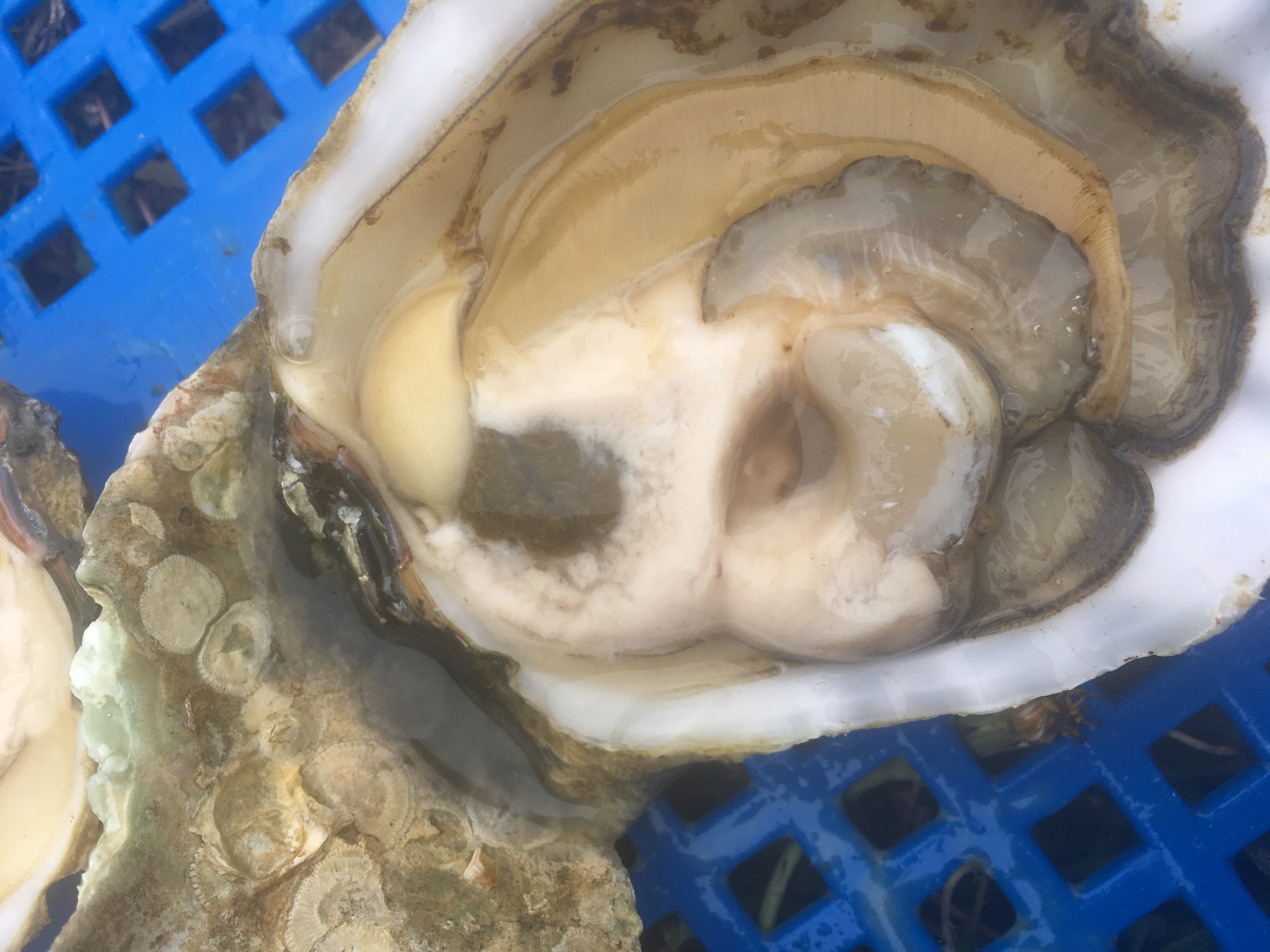 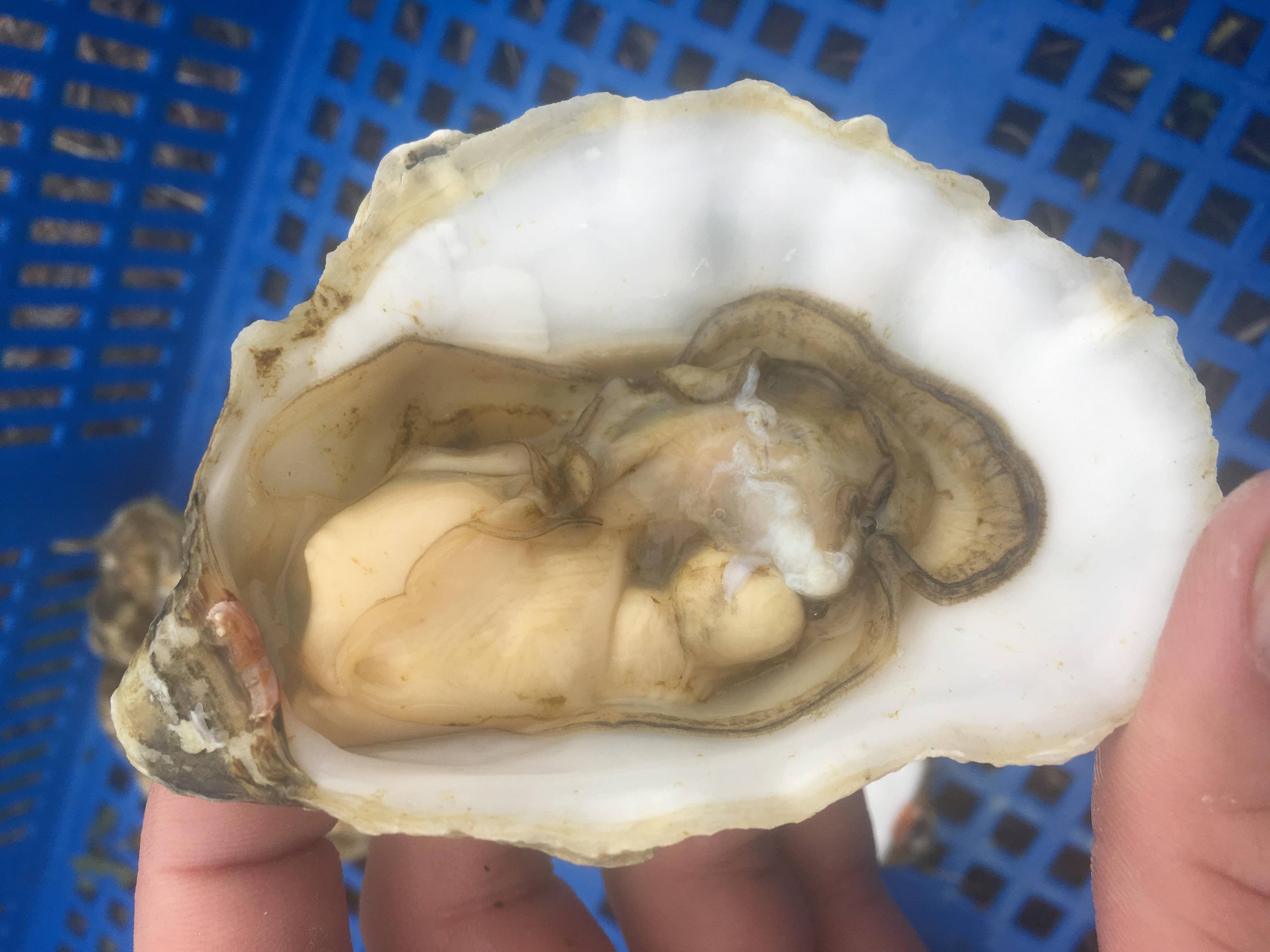 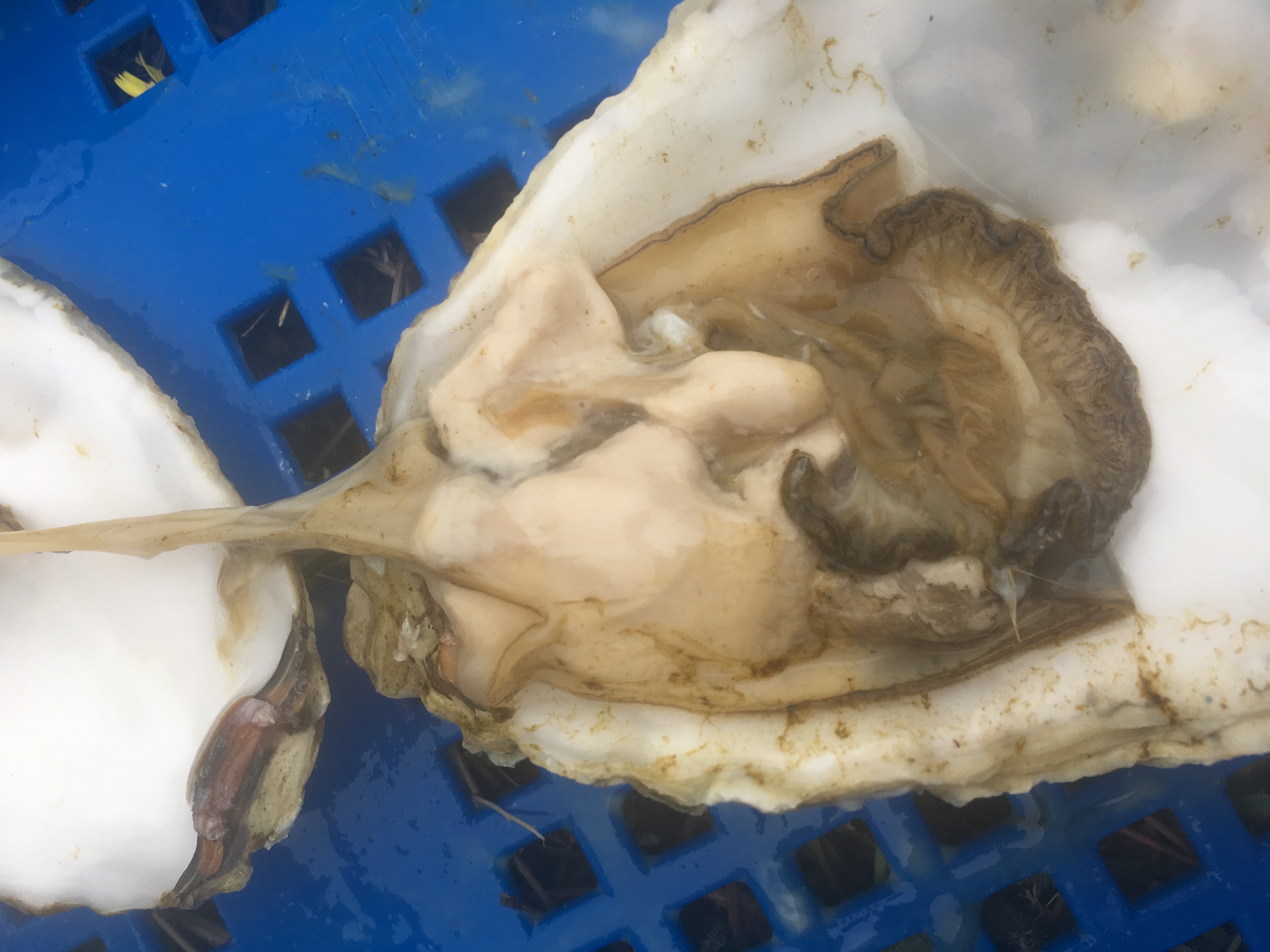 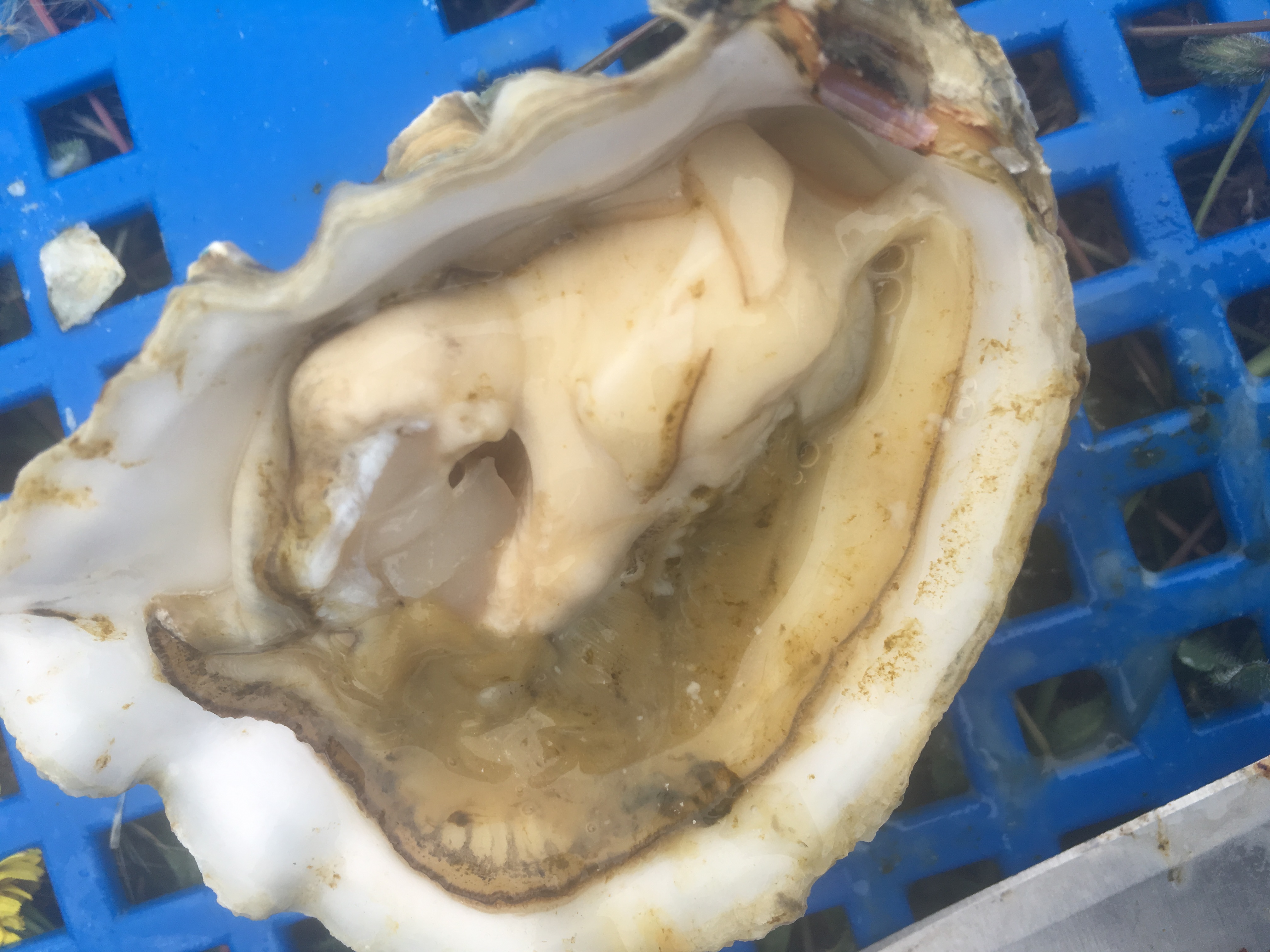 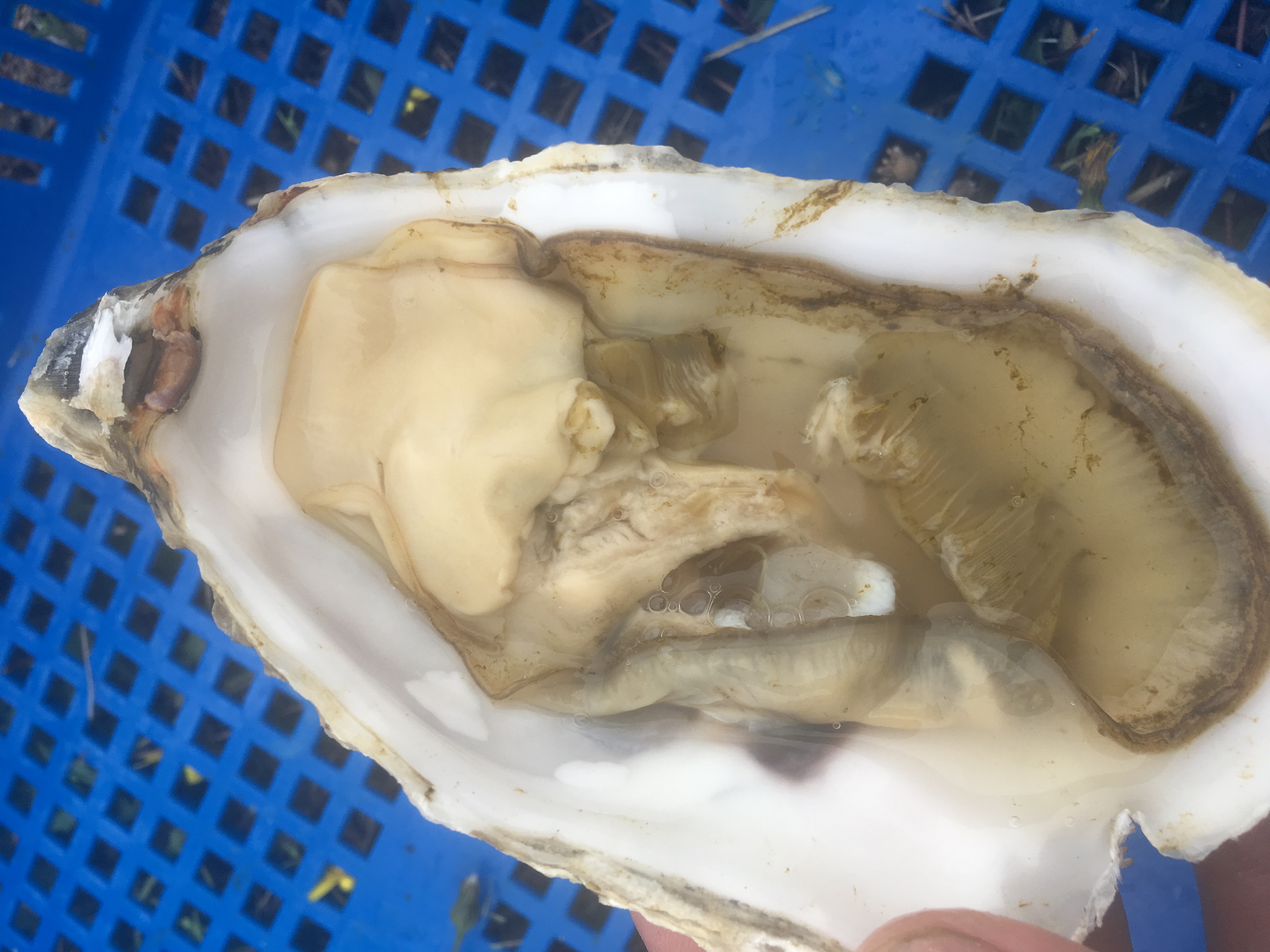 Figures 16-20. Gonads of recently dead oysters. All are milky and ripe.

The algae heating tank was not dirty, which was good. Because the pools were slimy and filthy, Laura cleaned them. However, this meant that she moved the oysters out of the water. I’d been avoiding this because I was told they would spawn out. Laura, however, did not know this. She adjusted flow to 2 L/min into each kiddie pool and set the dosing rate to 40 after adding 750 mL of food to the algae header. Before she left, she checked to ensure the oysters had not spawned out.

No mortalities today! I reduced the temperature anyways to ensure no more would die. 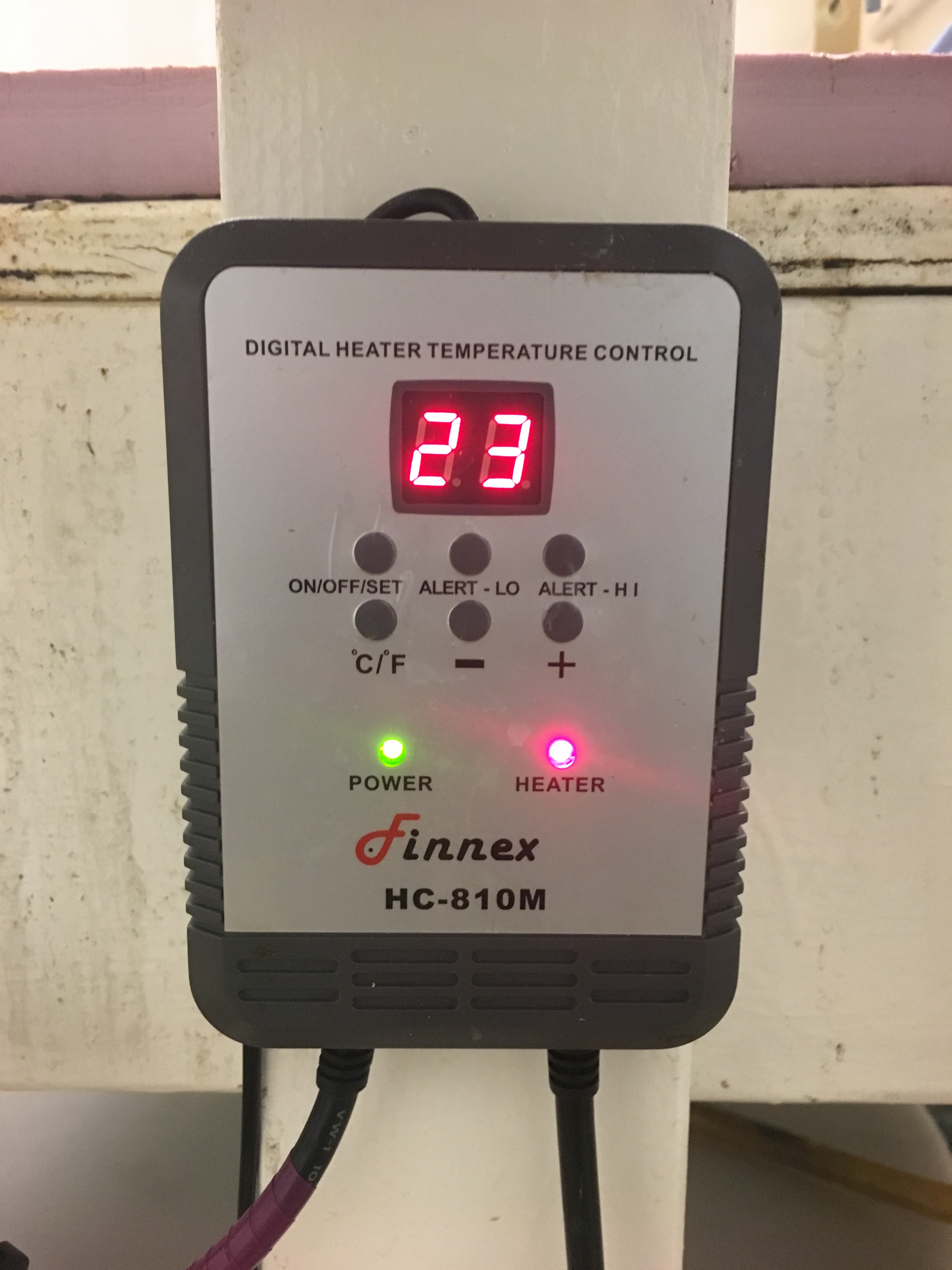 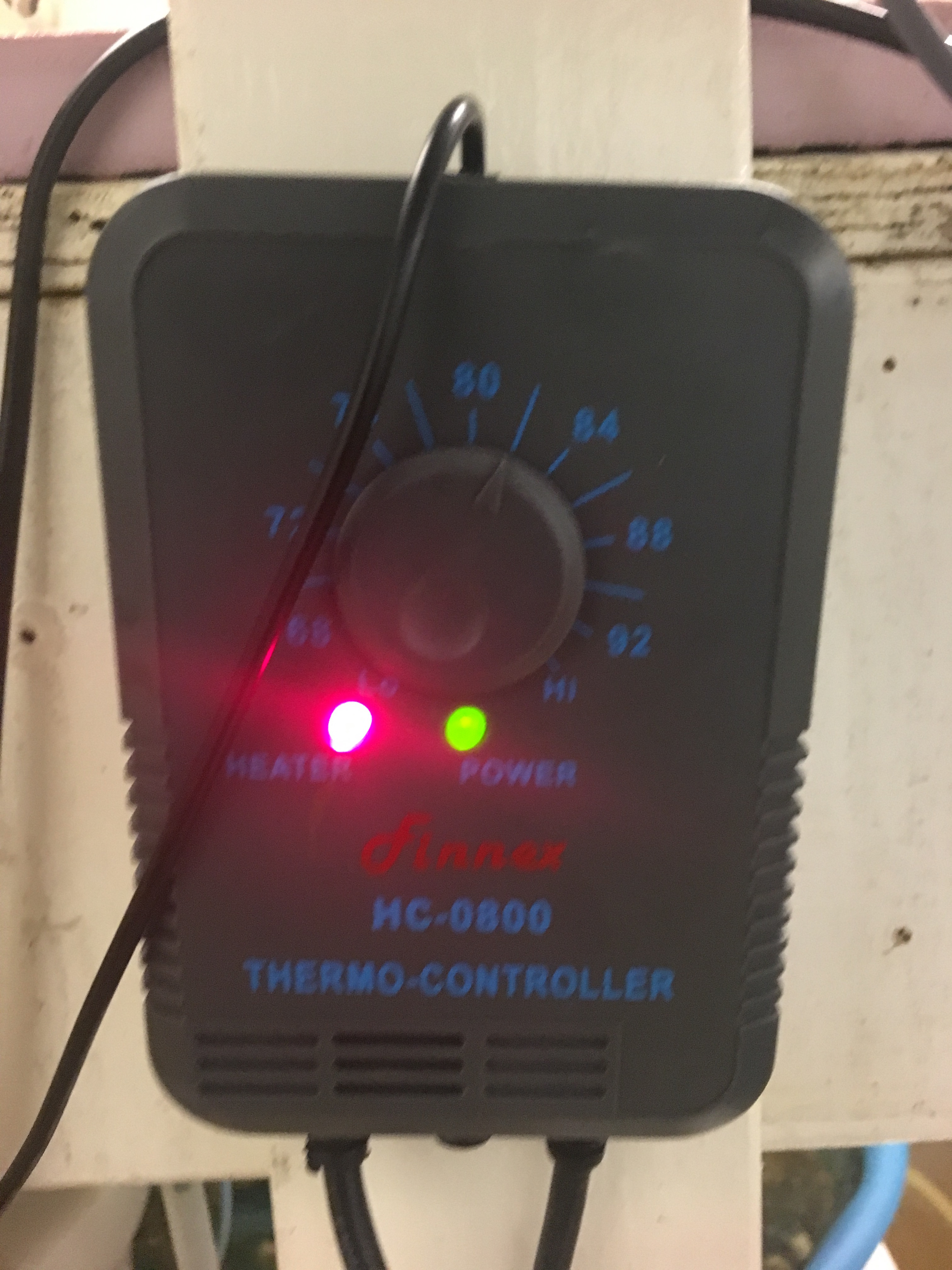 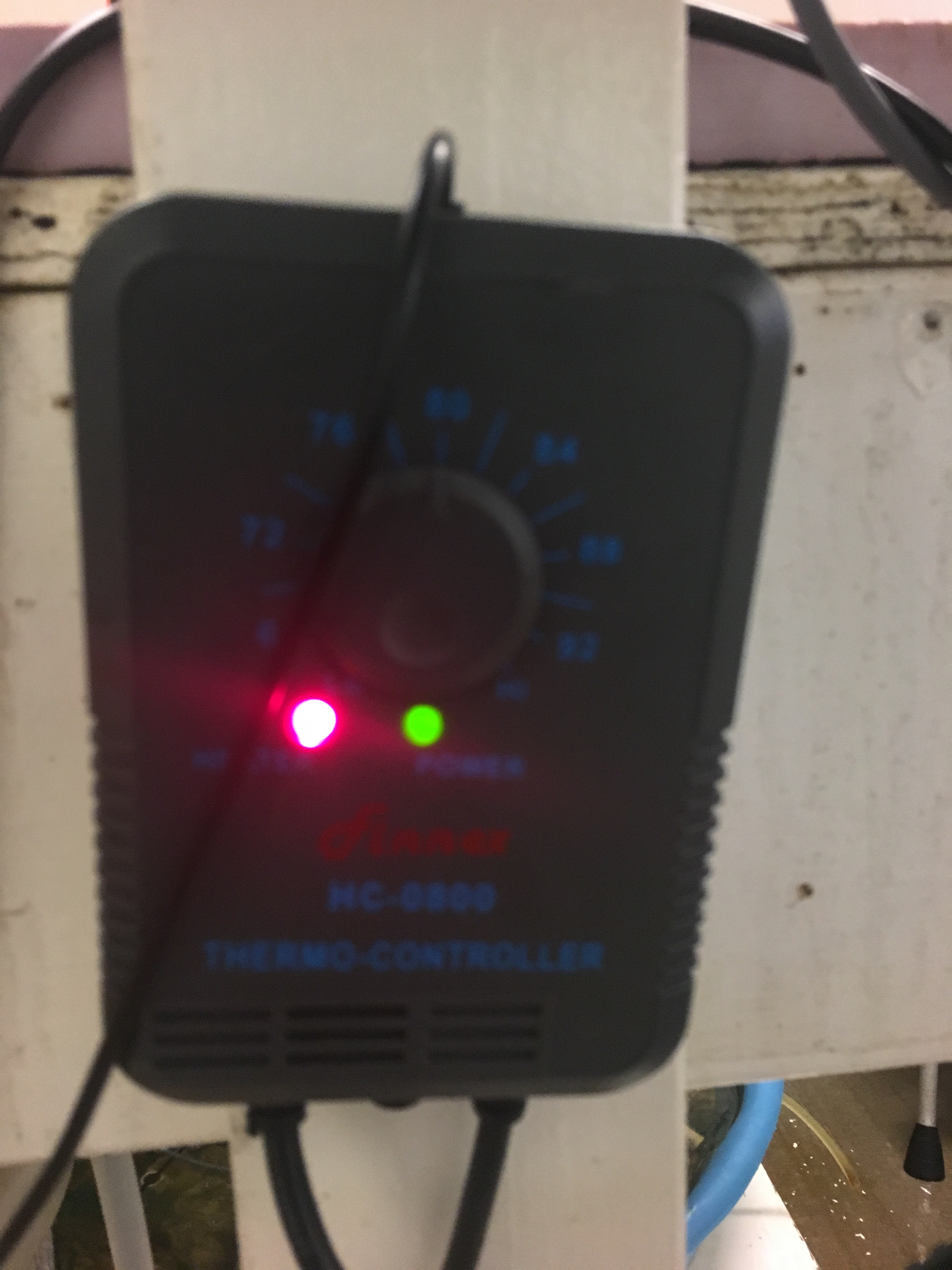 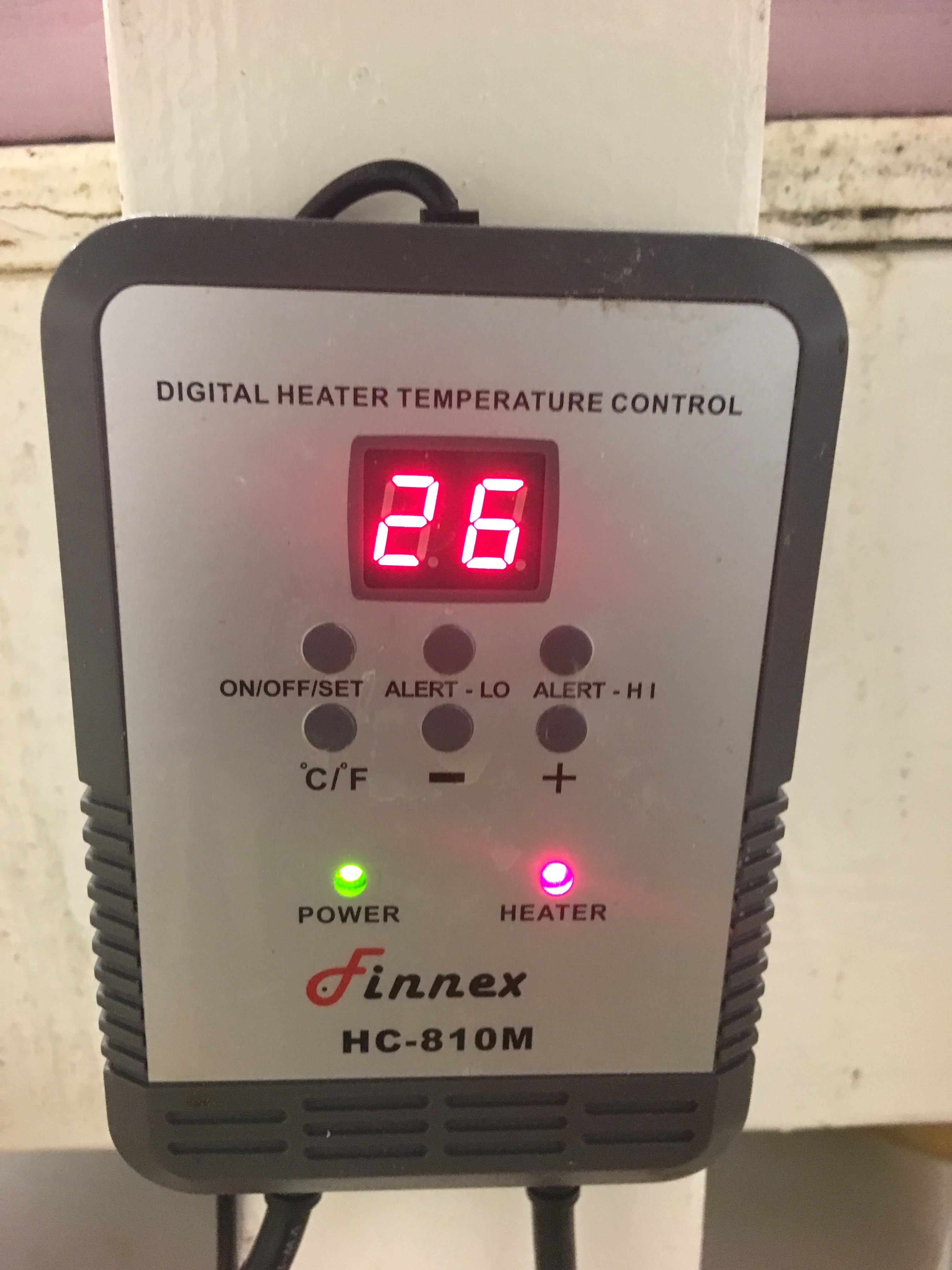 I put both AVTECHs in the same kiddie pool to see if I could get them to read the same temperature, but they were still reading different temperatures. I think any difference in temperature now may be due in part to the different readings from the probes. Unrelated, but the kiddie pool with Tank A oysters is always murkier than the other kiddie pool, even before disturbing it to clean. 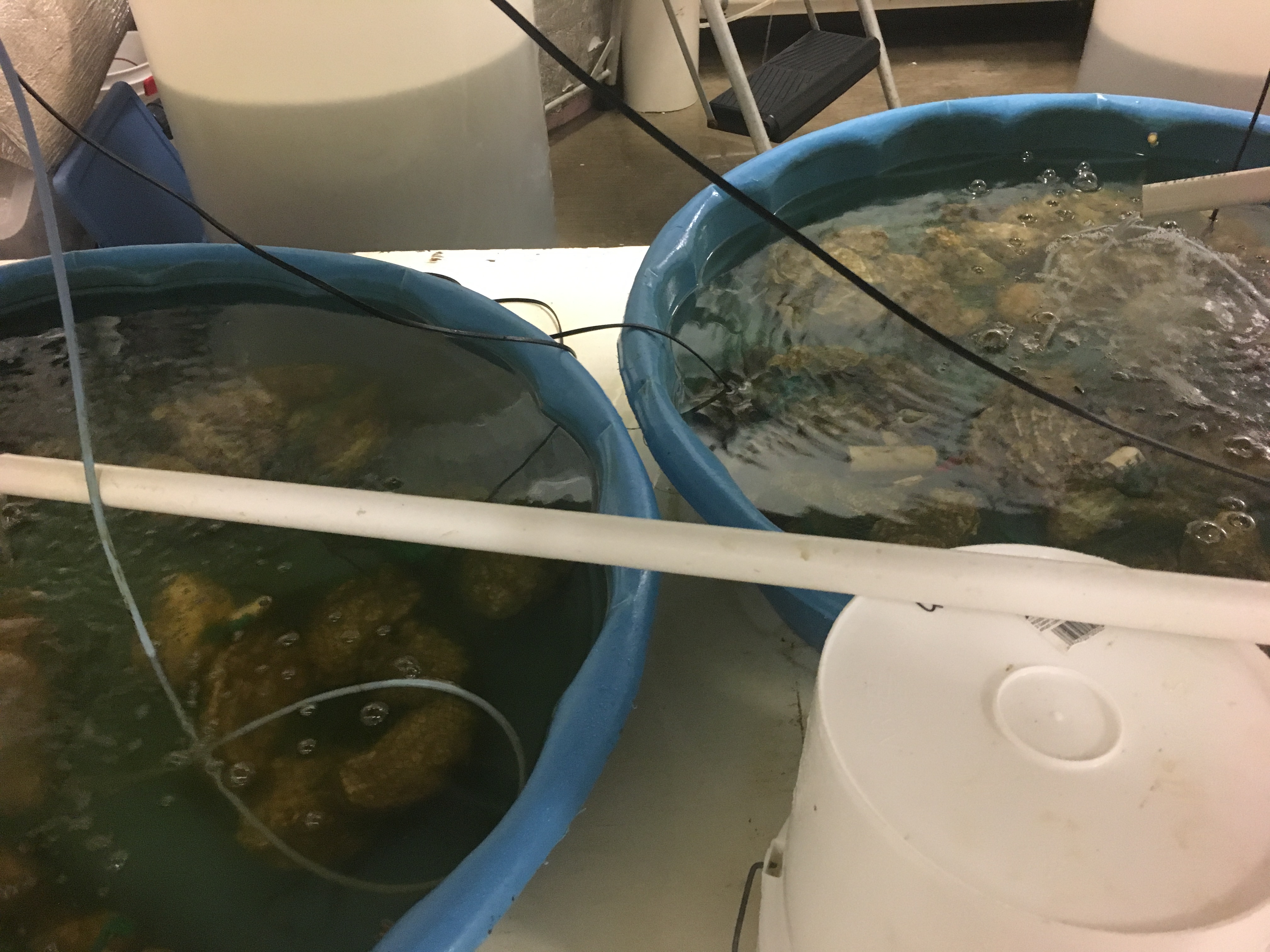 Figure 25. Pool clarity is different between Kiddie Pool A (right) and Pool B (left).

I took care of a couple of others things while I was out after cleaning the kiddie pools and heating tank. I counted about 60-70 tripours and obtained 8 totes that fit 3 buckets each. I need one more tote to fit 25 buckets total. 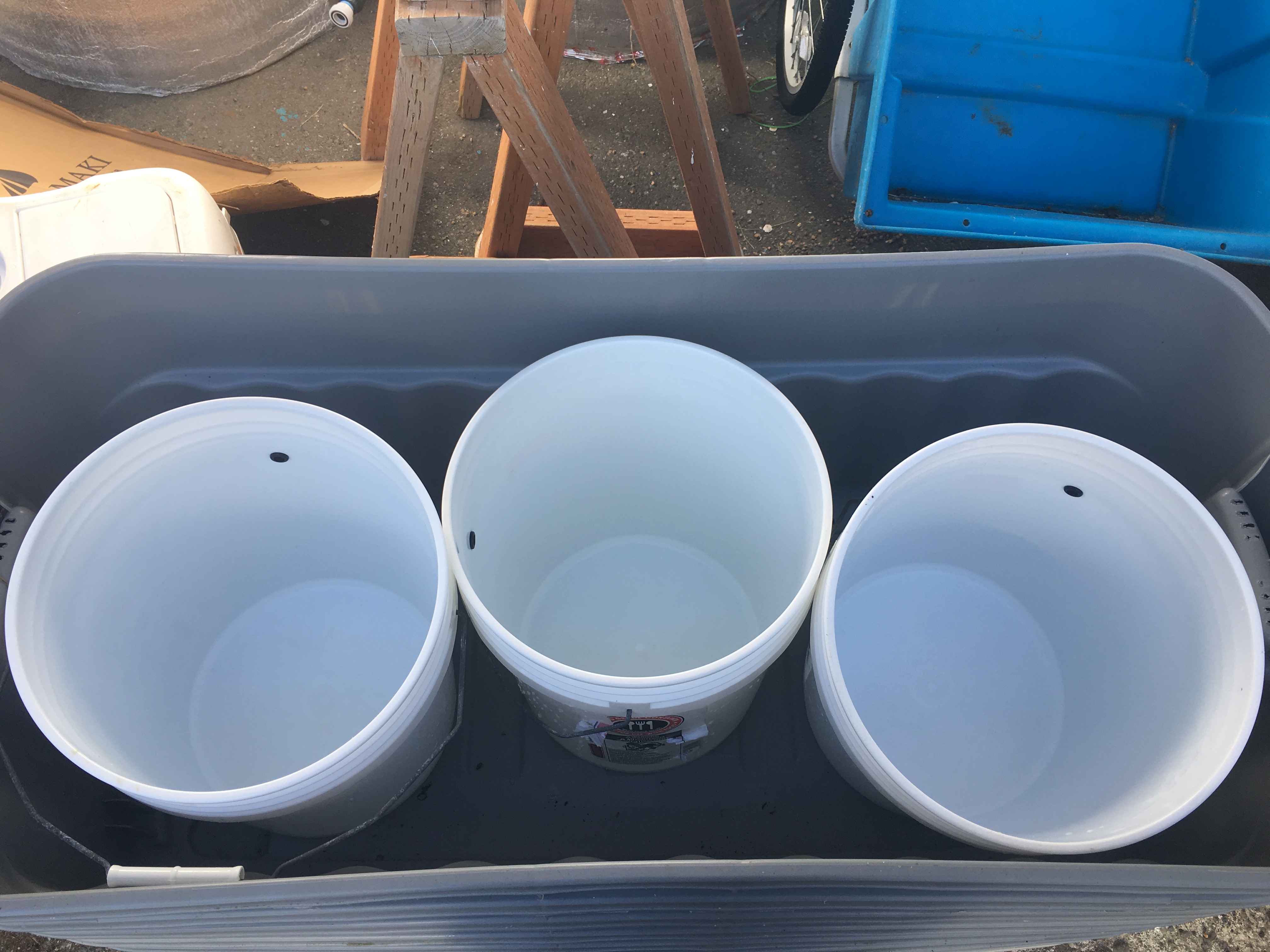 Table 1. Revised oyster counts in each tank, as of July 24.