It’s getting hot in here

Two months later and I’m back at Manchester! Today my goal was to heat shock some oysters to see how heat stress affects methylation. Ideally, I would cross some of these oysters with ambient water oysters, heat shocked oysters and oysters exposed to low pH conditions to see if there are any combination effects.

My first step was to see if all of my oysters were alive! I did find two freshly dead oysters: one in bag 4B, and another in bag 5B. 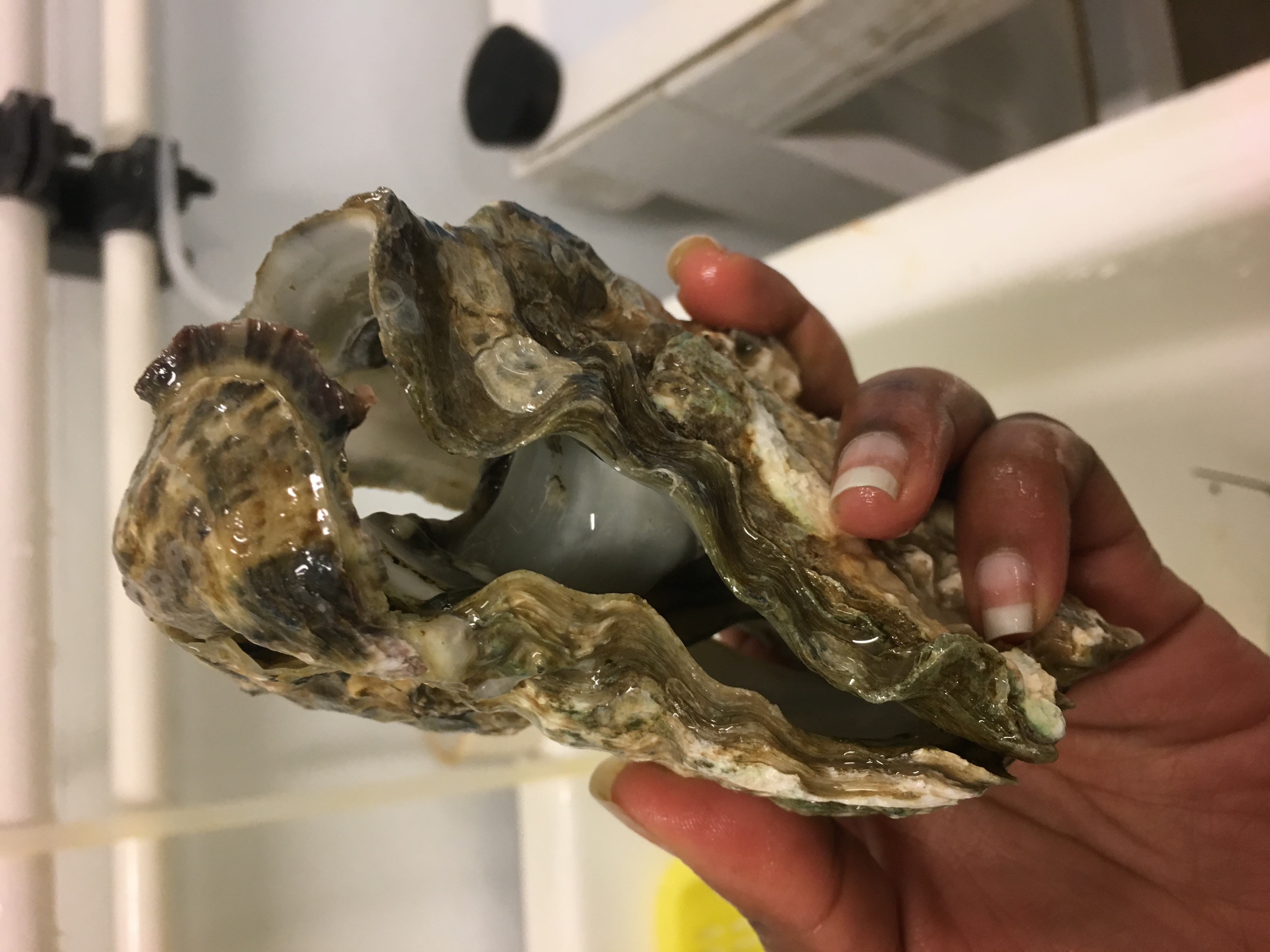 Figure 1. Dead oyster from bag 5B. Both dead oysters found had died recently, as there was still a significant amount of tissue left in the shell.

After draining and cleaning all of the oyster tanks, I was ready to heat shock some oysters.

Laura was able to set up a tank with a heater for me Sunday night. The water in the 100-L was static. There are two components: one controller, and one heater (looks like a giant curling iron). When the heater is plugged into the controller, it won’t go past 29ºC. However, you can plug the heater directly into an outlet and override the maximum temperature. I plugged the controller into the wall and waited for the temperature to reach 40ºC while I cleaned the oysters and their tanks. 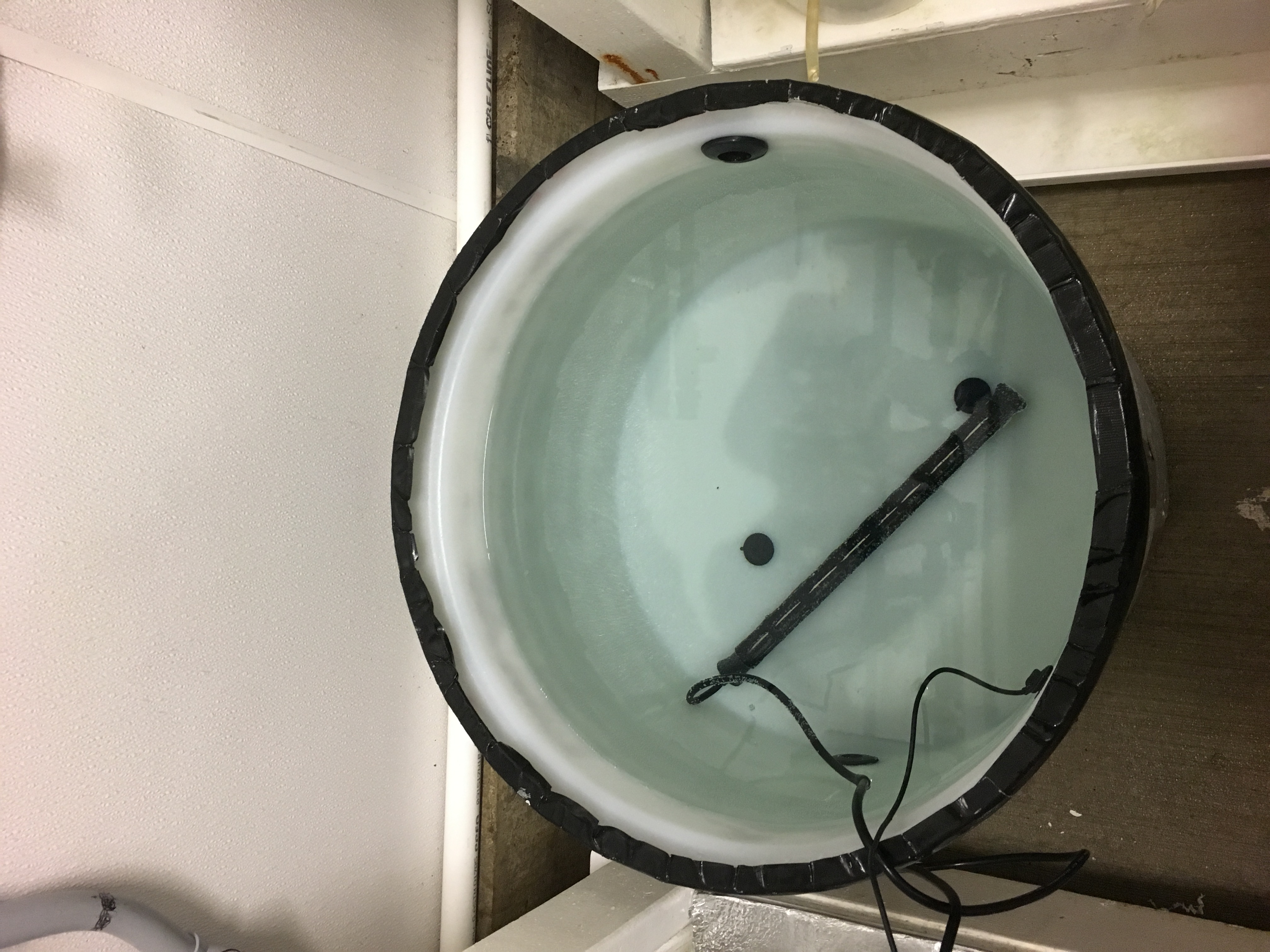 Figure 2 100-L with heater component. The temperature was set to 40ºC by plugging the heater unit directly into the wall.

I picked animals that were kept in ambient water holding tanks during the duration of my ocean acidification experiment. I counted twelve oysters that I could heat shock, while still having at least 15 oysters to use later when checking how ripe gametes are after conditioing. 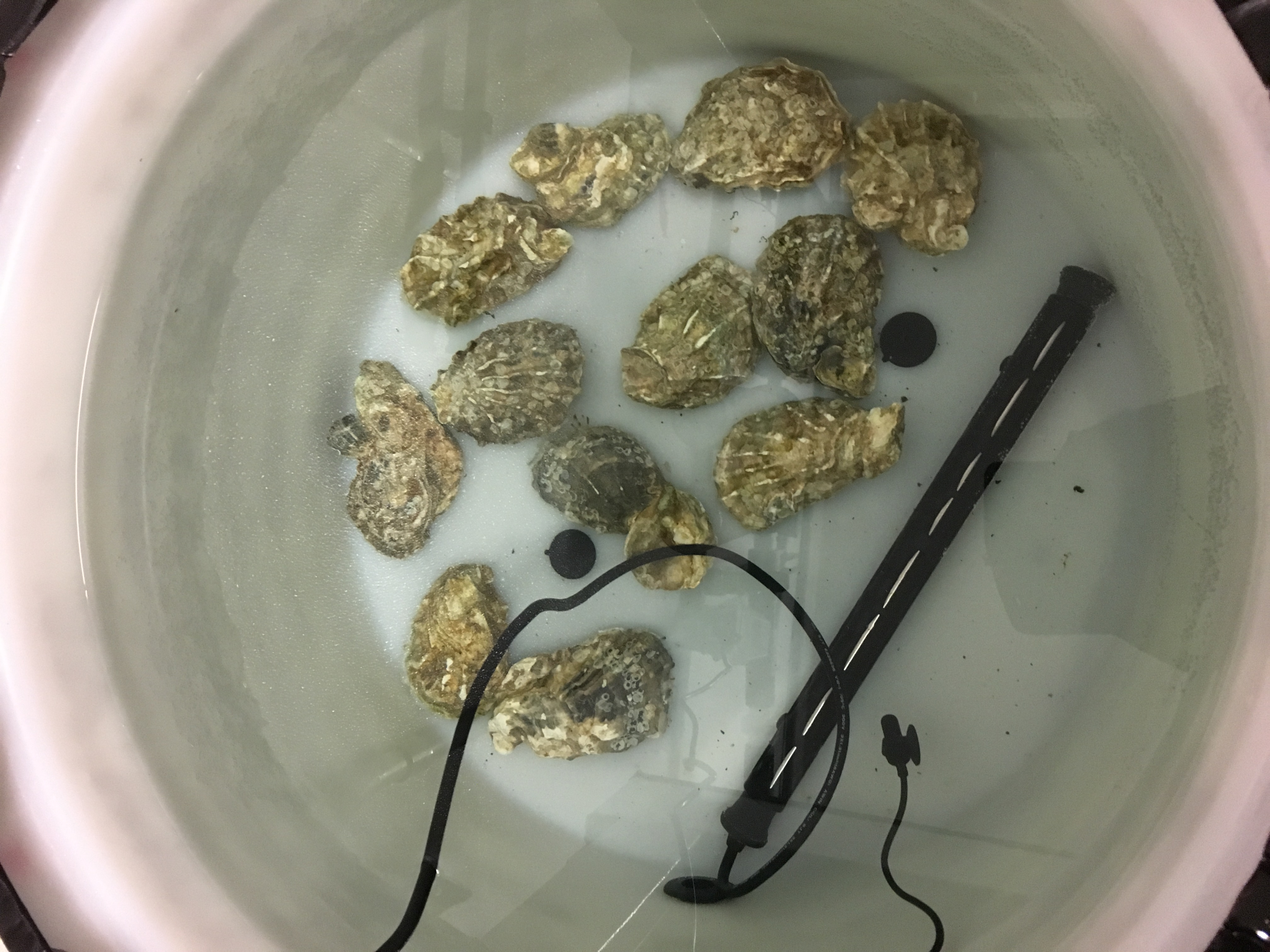 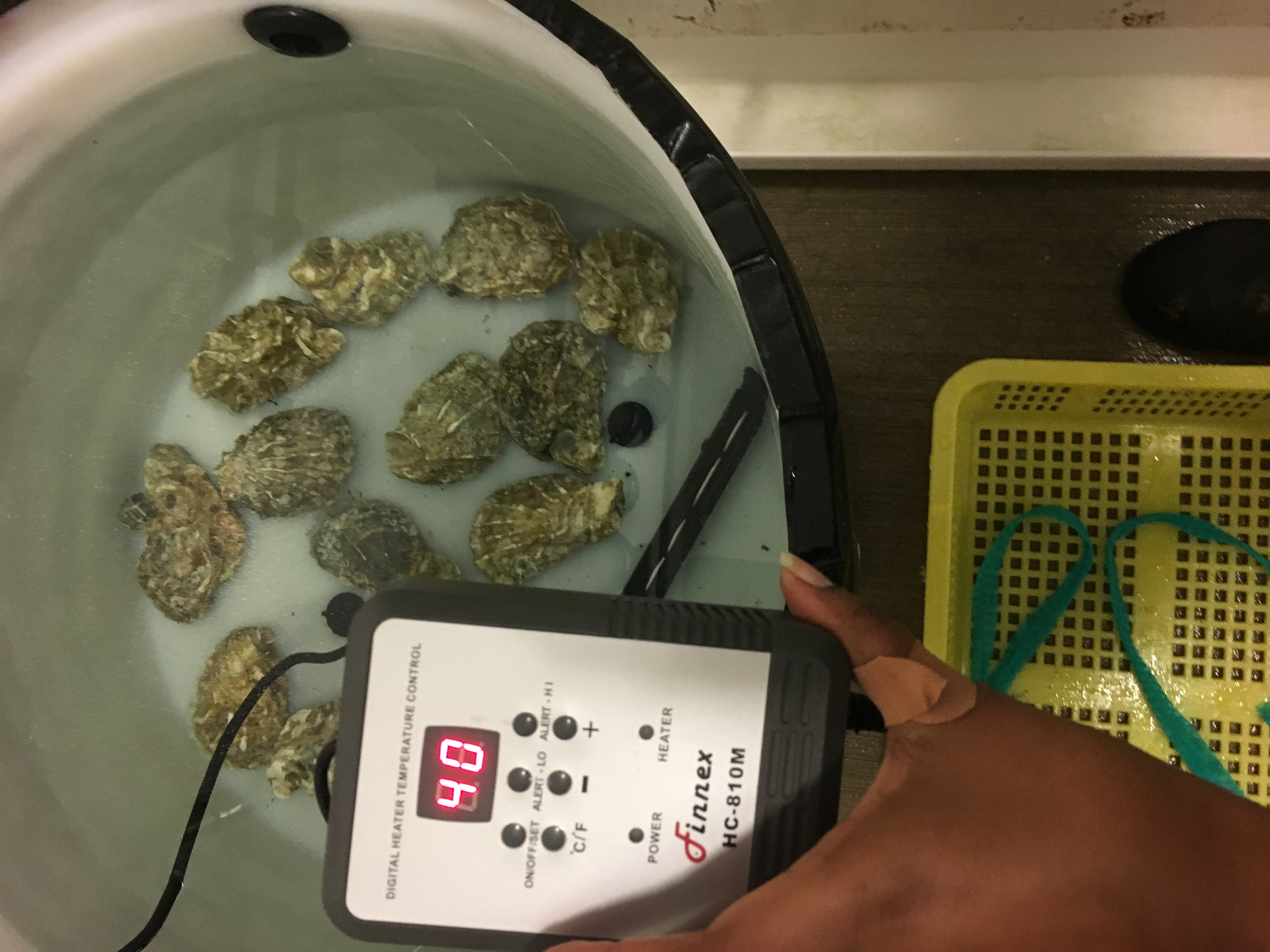 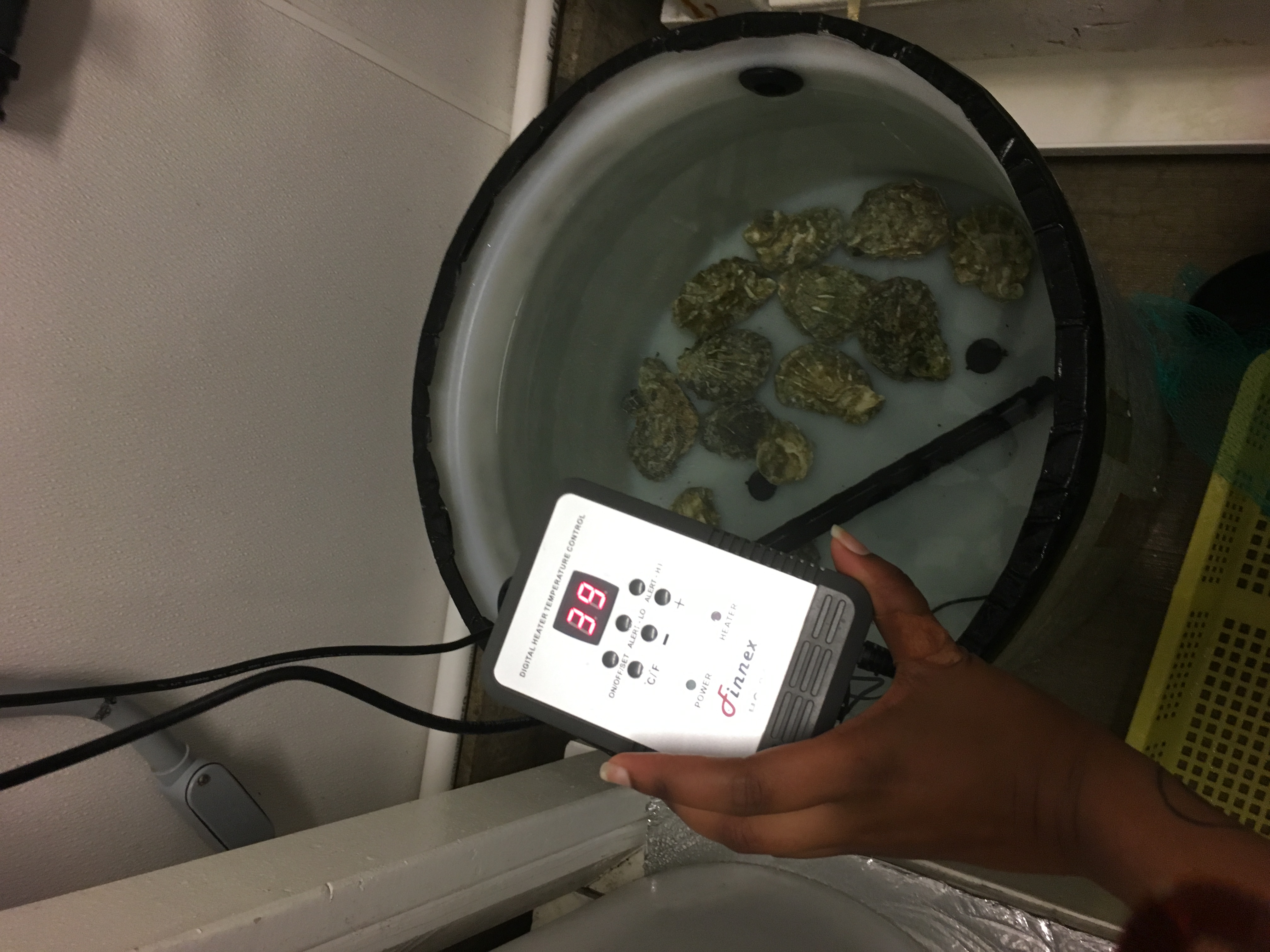 While I was out there, I prepared for conditioning. Using the same heater and 100-L tank, I set the temperature to 23ºC. However, this time I used a flow through system. The flow was put on full blast because I wanted to see if the heater had the capacity to warm the water as it came in. I’ll be back at Manchester on Thursday to prepare my oysters for conditioning.