During our meeting Friday, I realized I interpreted the data analysis task incorrectly. Instead of combining CpG methylation status and genomic location information to use for multivariate and modeling approaches, I needed to consider the data separately!

Before I could revise my analysis, Hollie pointed out that the M. capitata gene track did not have the correct amount of genes in this issue. In addition to using genes with the AUGUSTUS tag, I needed to pull genes that had the GeMoMa tag (from a different related species). In this Jupyter notebook, I matched multiple patterns with grep to revise the gene, CDS, and intron tracks.

I used these revised tracks to create my three flank tracks and intergenic region track. Since the files have the same name, I didn’t need to update my IGV sessions. Instead, I uploaded the revised tracks to gannet so they would populate IGV. 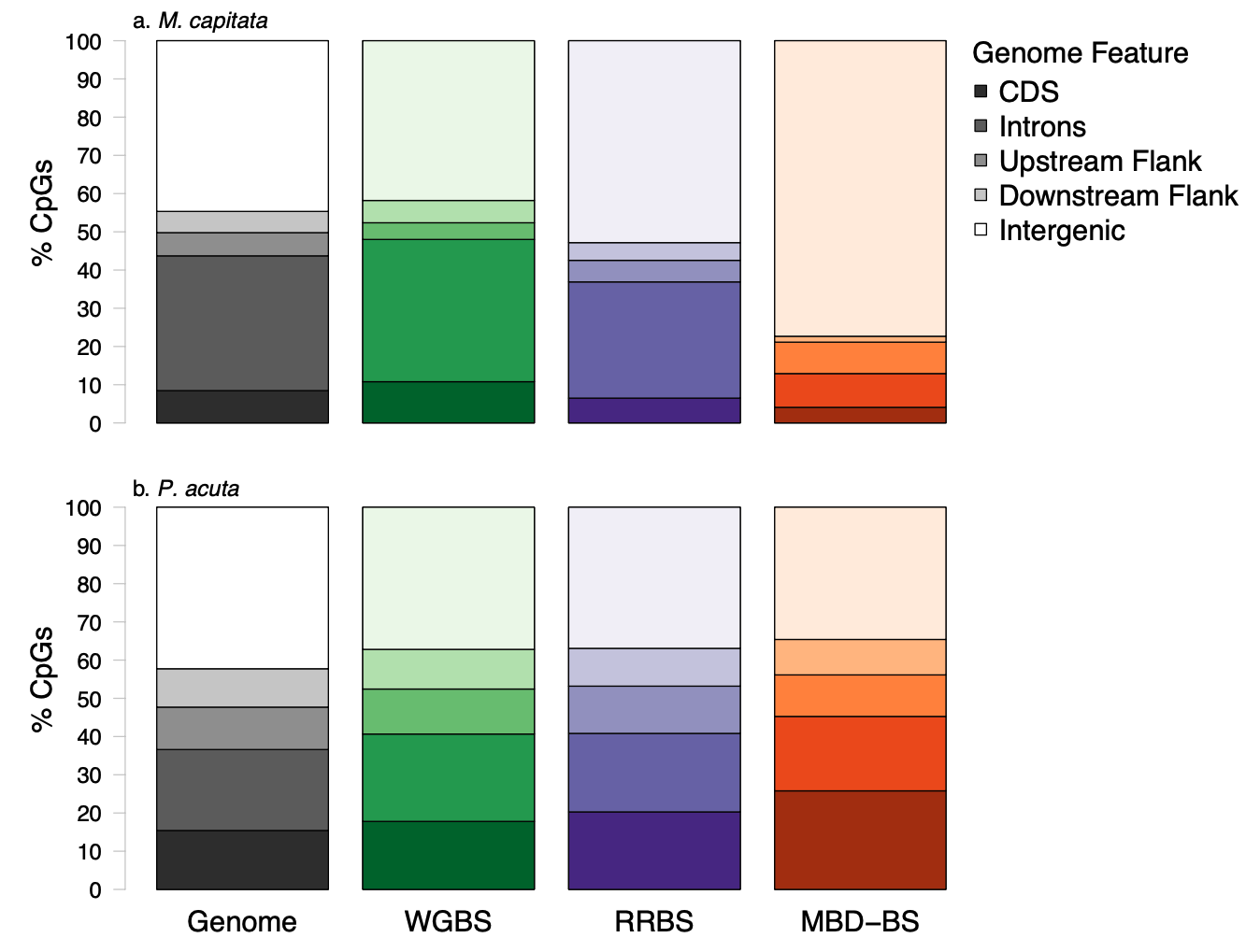 Looking at my output, it no longer looks like MBD-BS is no longer the best for capturing gene regions. Since I ran this code quickly and late at night, I need to double check that this stacked barplot is trustworthy.

Now, the big stuff. I took the output for individual samples and recreated my summary tables in this R Markdown script. Based on feedback from Friday, I ran individual NMDS, ANOSIM, and model sets for the CpG methylation status and genomic location datasets. Similar to the methylation status models, I ran individual models for each genome feature since all the proportions add up to 1. I included replicate information as a random effect.

I ran my analyses and questions by Evan, and he suggested I switch over from NMDS and ANOSIM to PCoA and perMANOVA. Apparently, the creators of the vegan package recommend this. The perMANOVA has a more robust statistical output format as well. I kept my centered log-ratio transformation and euclidean distance matrix, but fed it into cmdscale to run a PCoA instead. I investigated the PCs, eigenvalues, and loadings. I then used adonis to run a global perMANOVA. To understand if a significant perMANOVA result was due to centroid or variance differences between groups, I ran a beta dispersion model. A non-significant result indicates that differences are due to centroids, not variance. After my global perMANOVA, I ran pairwise perMANOVA test to understand the significant global perMANOVA result. Similar to when I was running ANOSIM, I ended up with complete enumeration. However, it was easier to interpret the perMANOVA output and see how much variance the test explained. After running my regressions, I extracted p-values and corrected them using a false discovery rate.

Although most of my questions are addressed, I still have two more. When running the beta dispersion model for my P. acuta data, I found that group variances were significantly different from eachother! My guess is that sample 8 is an influential point or outlier that is contributing to variance differences between groups. I need to investigate this further. While I didn’t need to make any changes to the models (so nice!), the models are set up in a way that compares WGBS to RRBS and MBD-BS and not compare the two enrichment methods. I’m not sure which post-hoc tests I need to use to compare these two methods. I knit the output into this document, emailed Evan, and posted my follow-up questions here. The end is (hopefully) near!