Before I can normalize my data, I need to check my dilution curve. The reason we make a dilution curve is to confirm that as the concentration of protein in my sample decreases, there is a concurrent decrease in abundance picked up by the mass spectrometer. If this isn’t the case, then there’s something funky with the assay!

The first thing I did was duplicate the dilution curve Skyline file that was on Woodpecker so I could modify it. Laura made this document with both of our sample files. I then deleted all of the geoduck protein information and sample files. 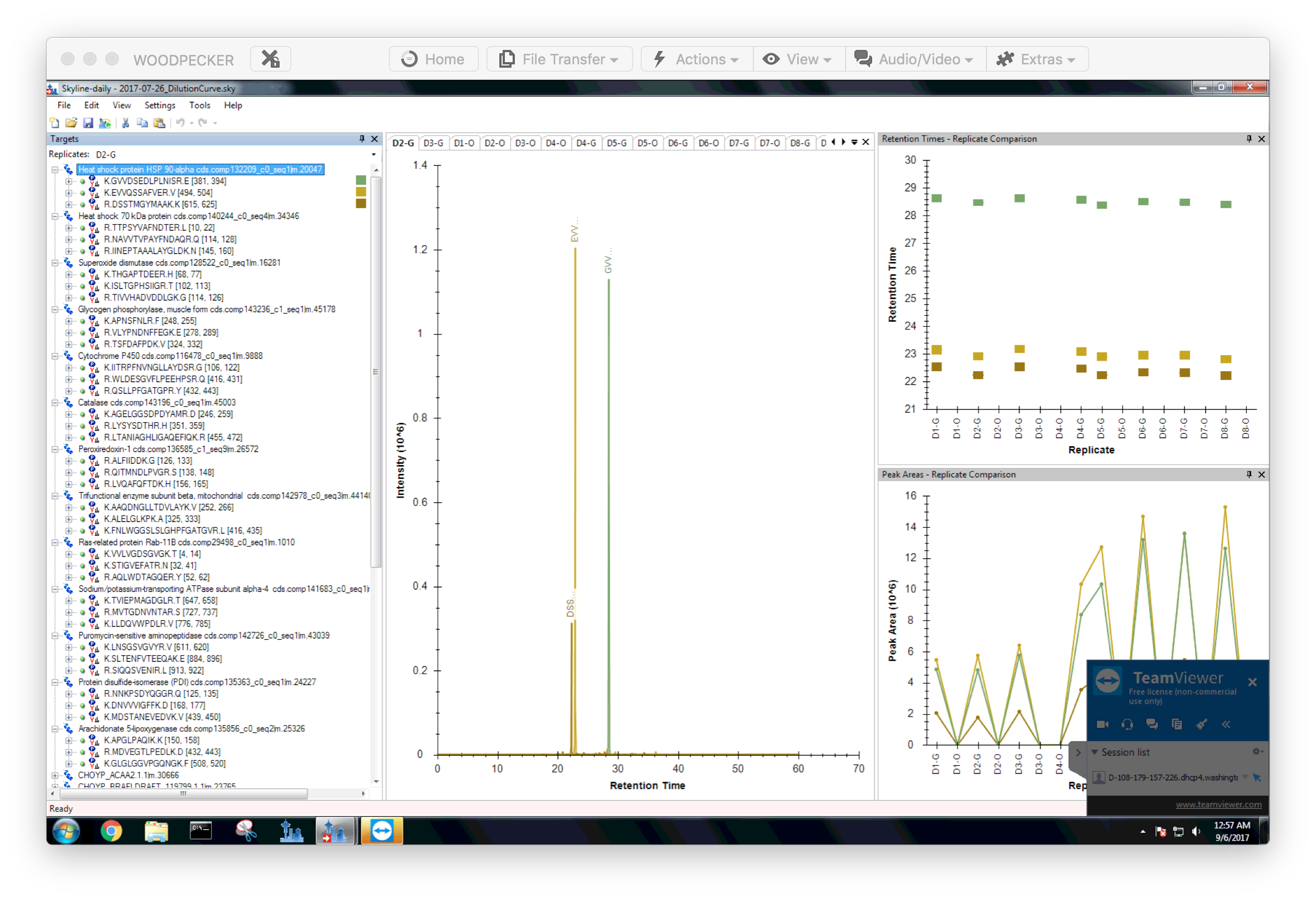 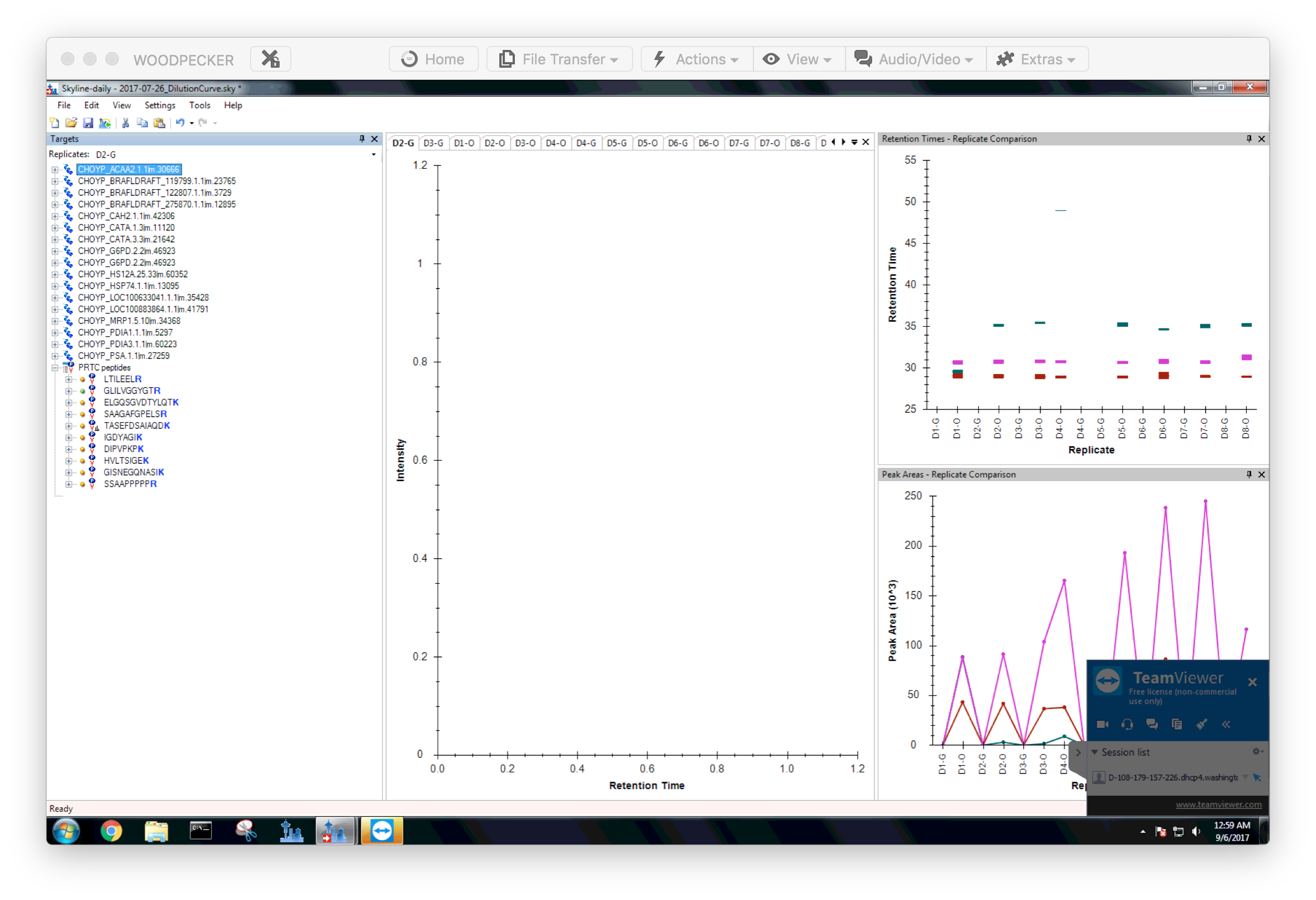 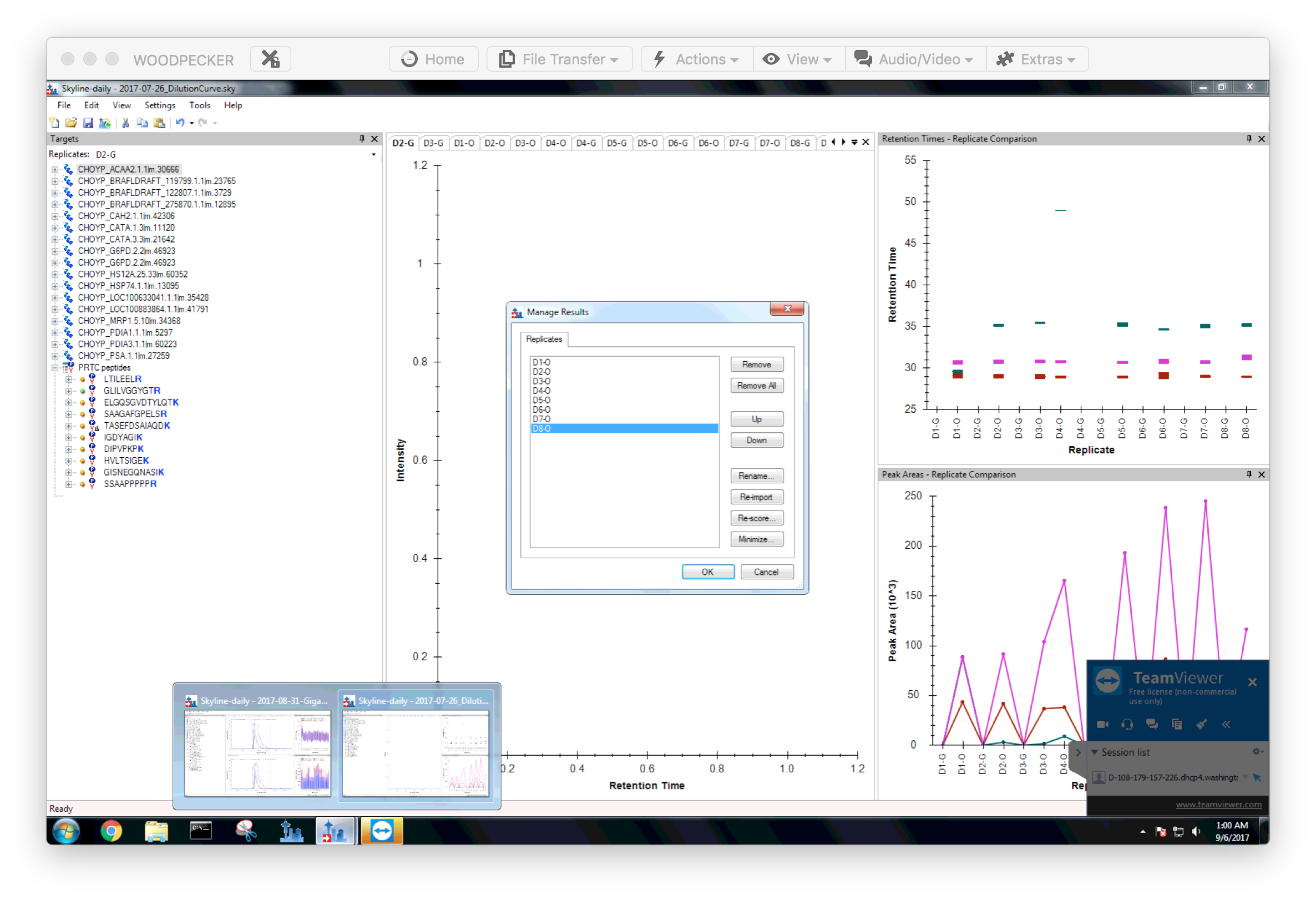 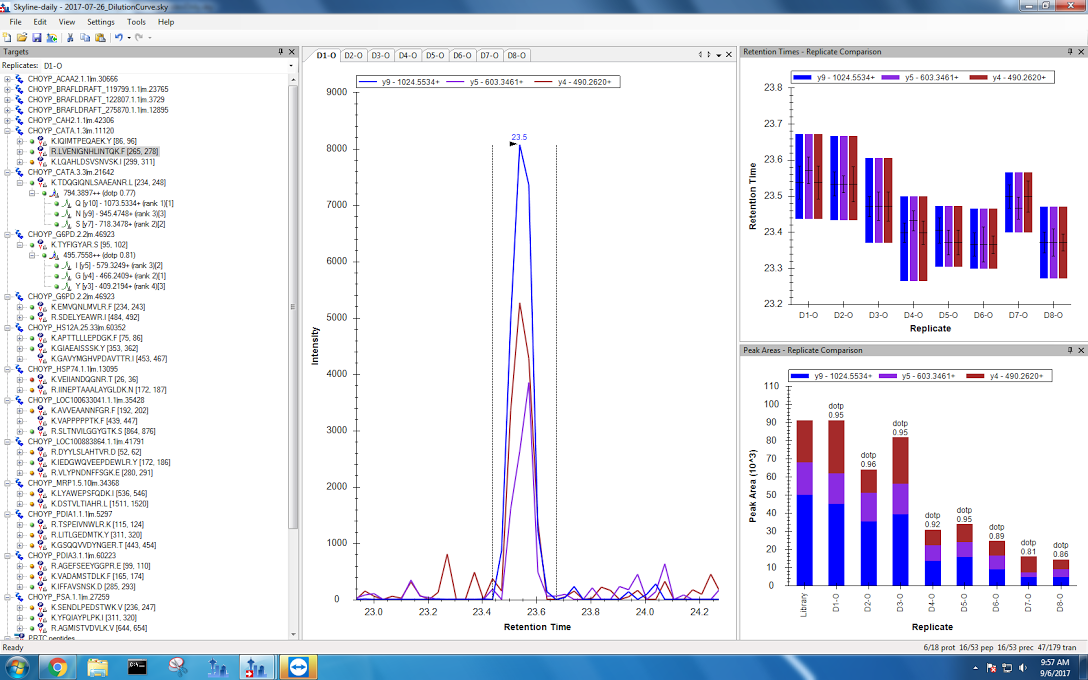 Figure 4. Example of a general decrease in abundance due to dilutions.

For dilutions 6, 7 and 8, the concentration of oyster proteins were really small. It was difficult to distinguish the peak in Skyline, so I did my best to pick the correct peak based on retention time. I also had to keep in mind that all of my peptides had a slight increase in retention time for the seventh dilution. 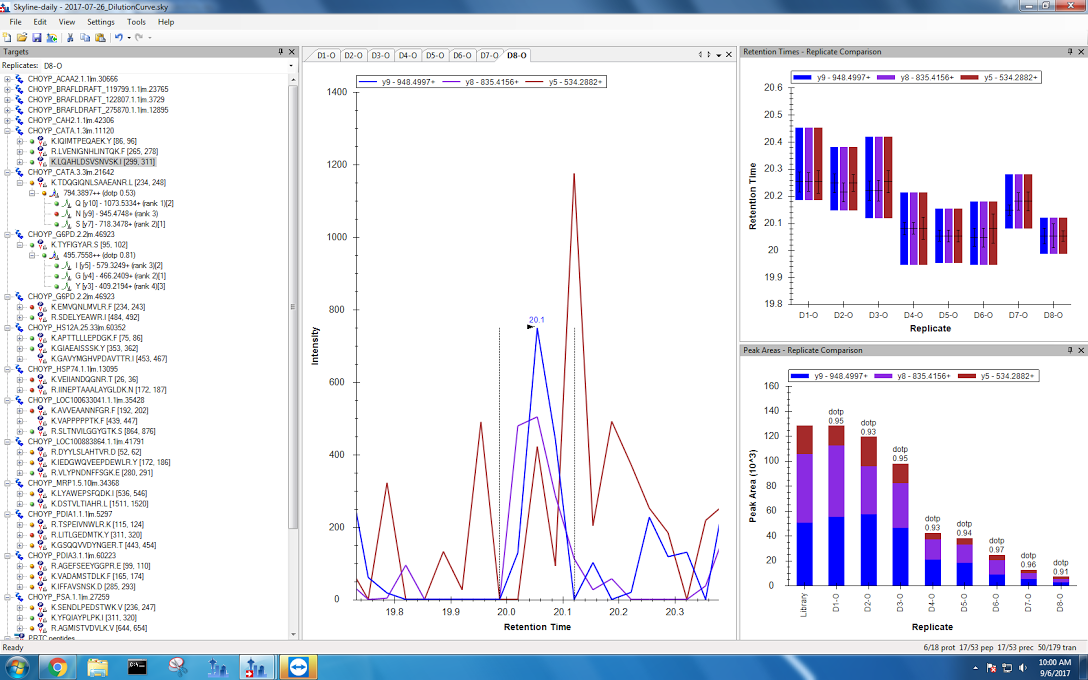 Figure 5. Example of a peak that’s difficult to pick out due to low abundance.

Sloppy peaks were a big problem for my multidrug resistant protein data from the fourth dilution onwards! Again, I tried my best to pick the correct peaks. If Emma thinks this is too messy to be reliable when I meed with her tomorrow, I can just exclude this protein from my analysis. 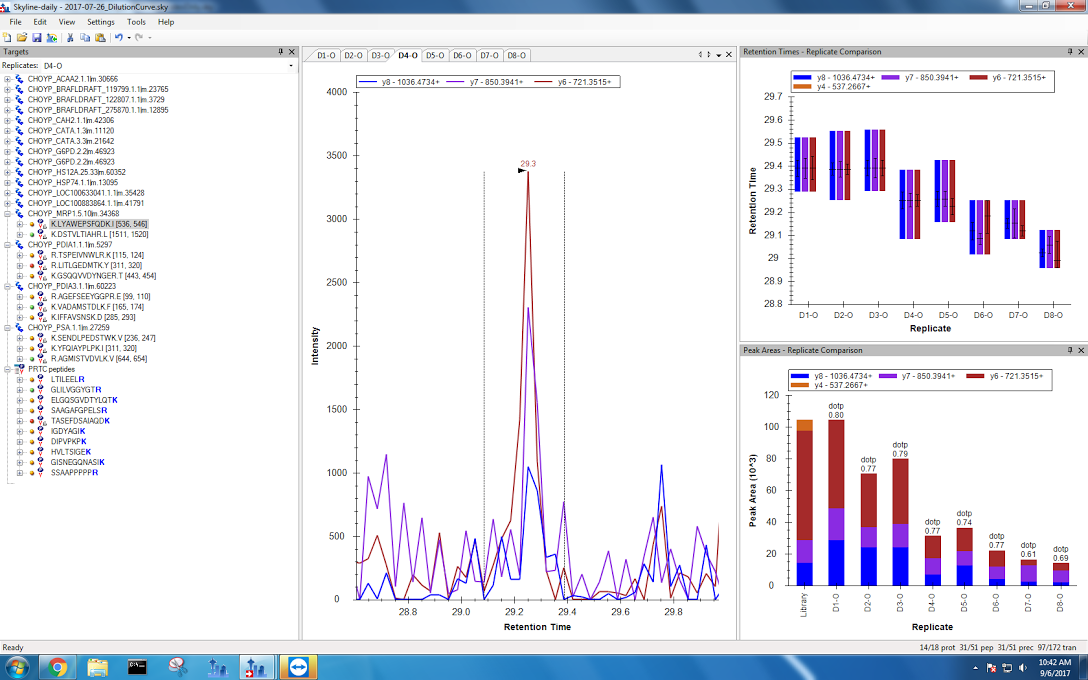 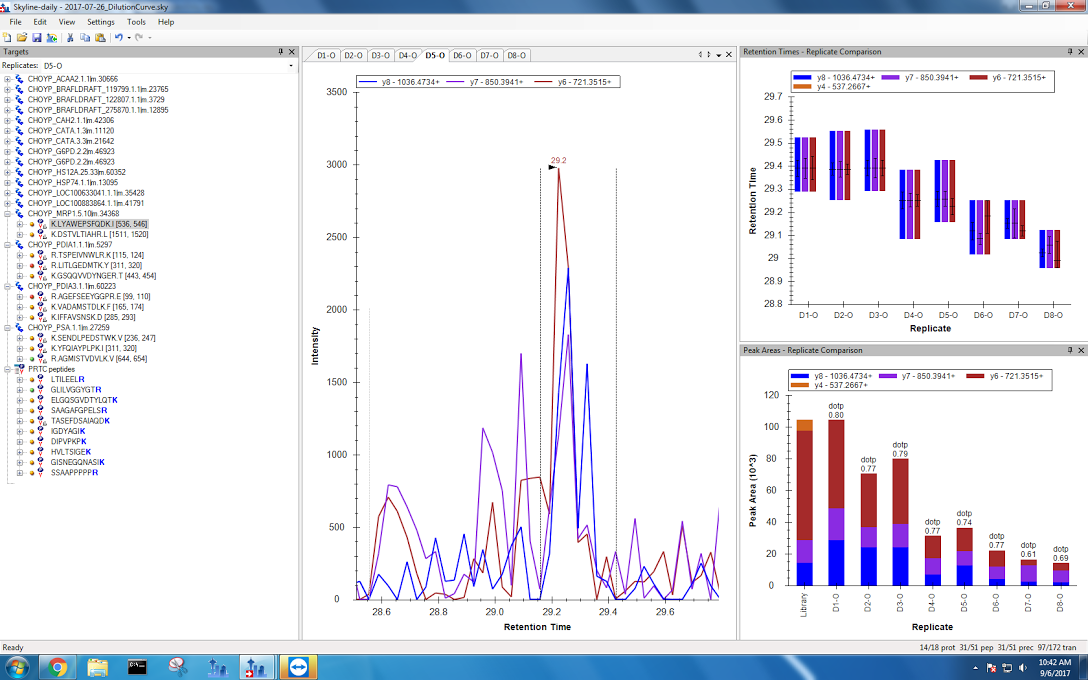 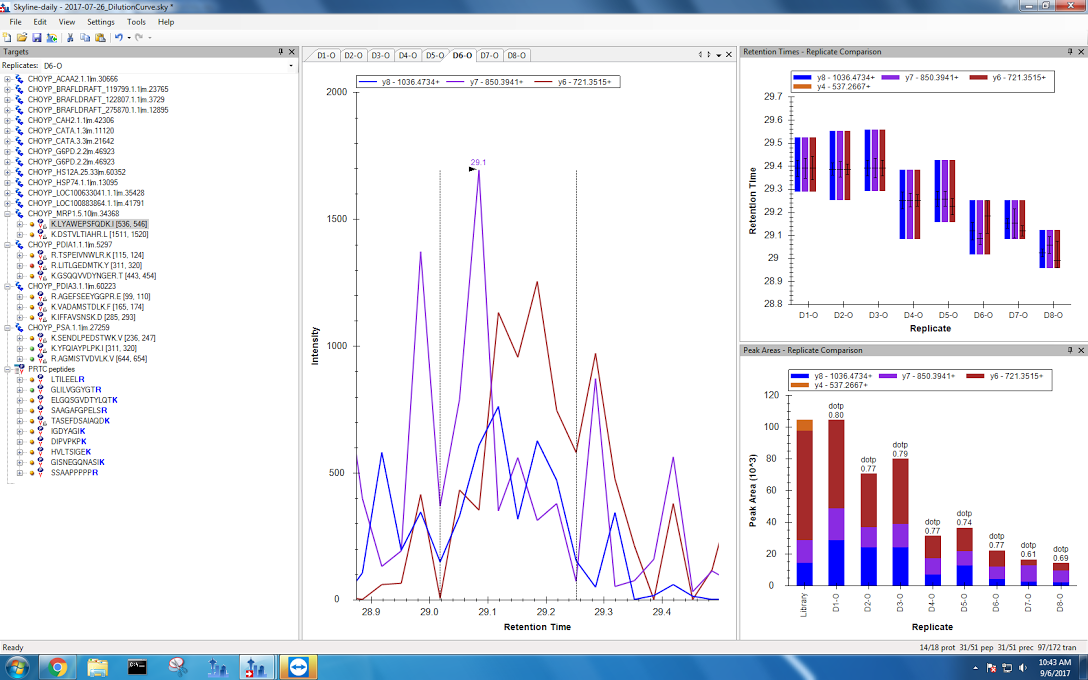 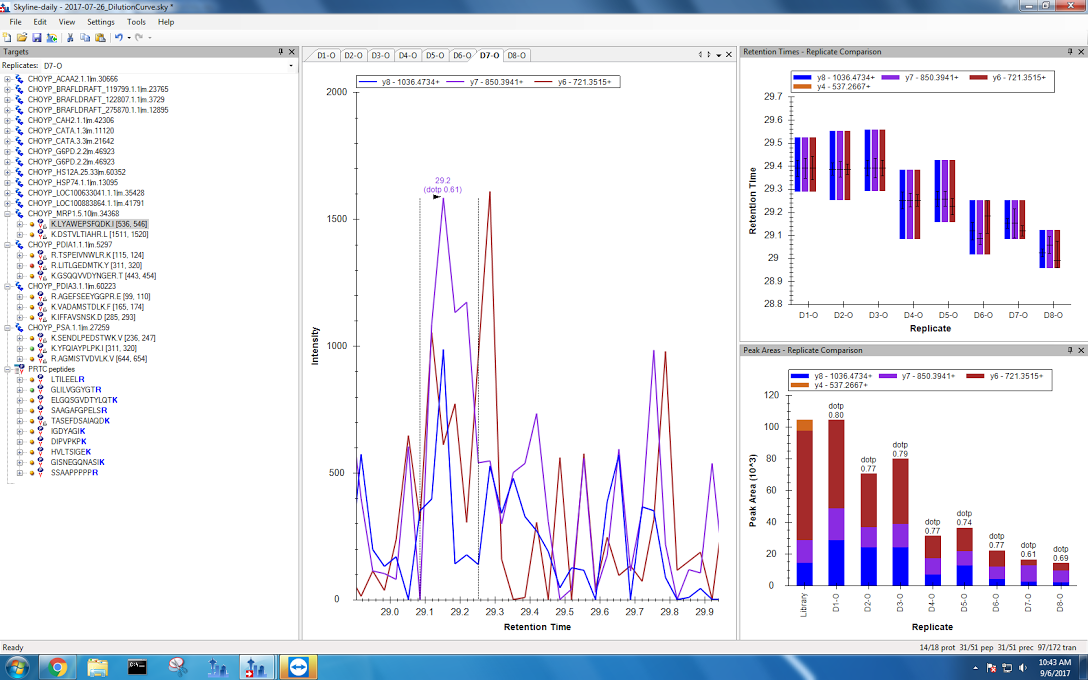 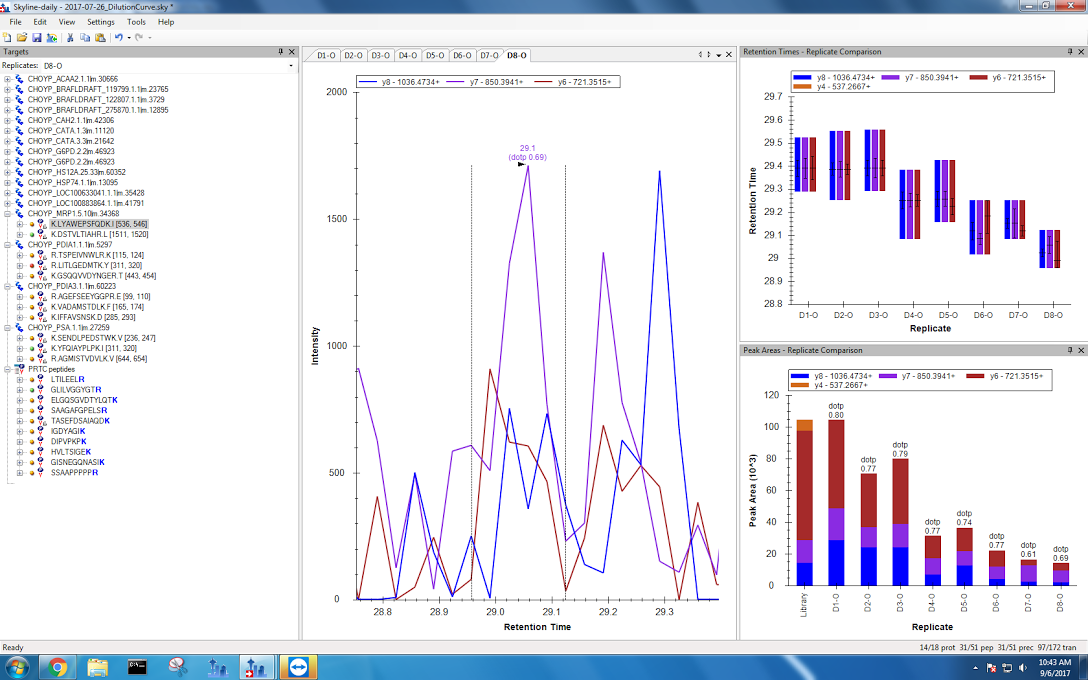 Unfortunately, there were a few peptides that increased in abundance as the amount of oyster protein added decreased. This could mean a few things. Most likely, the assay was not correctly designed for these proteins. However, there’s also the possibility that there is a geoduck protein that is very similar to my oyster protein confounding the results. Since the total concentration of protein added was the same for all dilutions, a combination of oyster and geoduck protein detected should lead to the same peak area across dilutions. Therefore, I don’t think it was this second scenario, and that the assay was incorrectly designed. 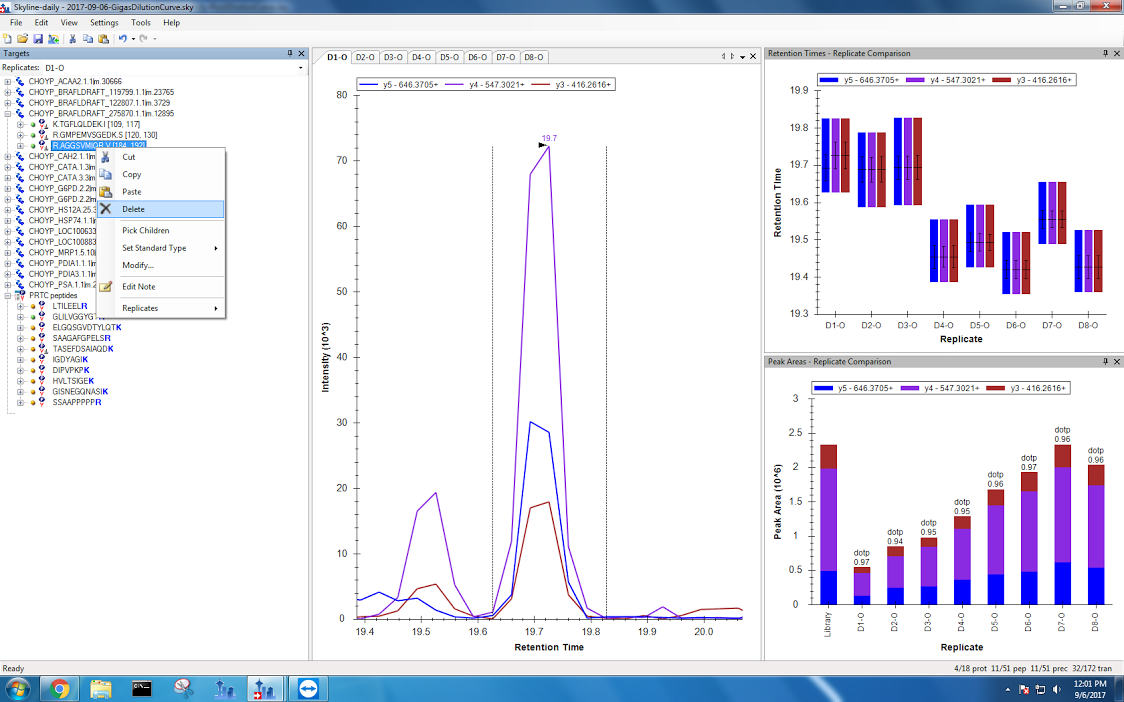 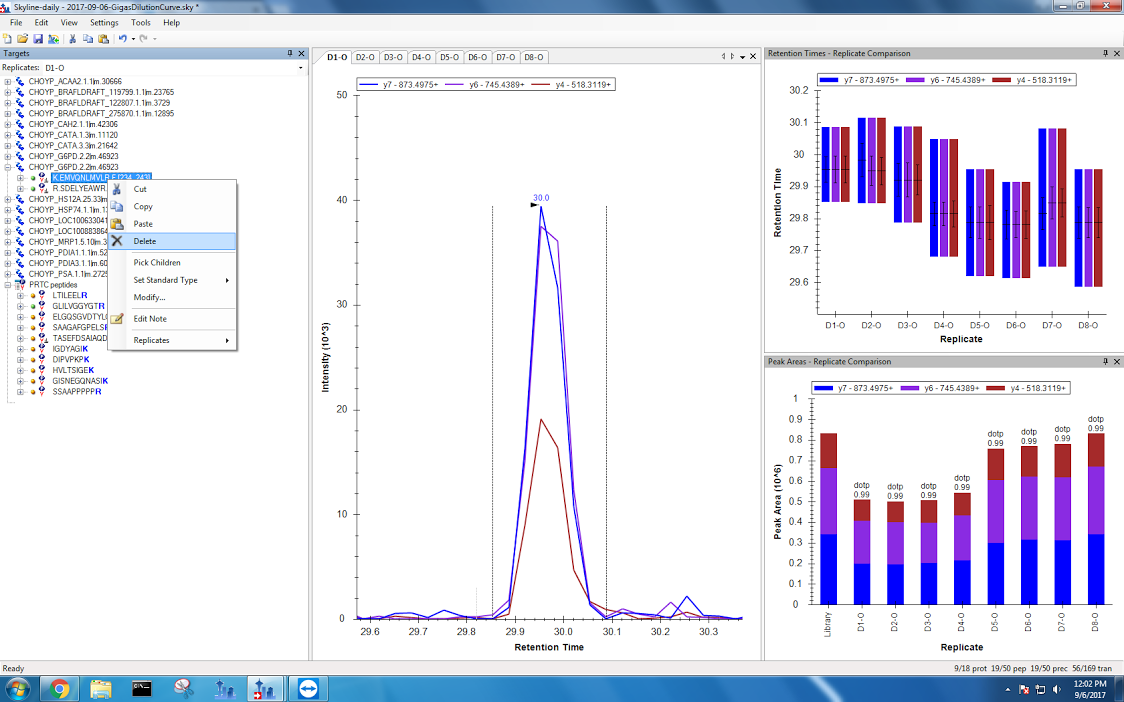 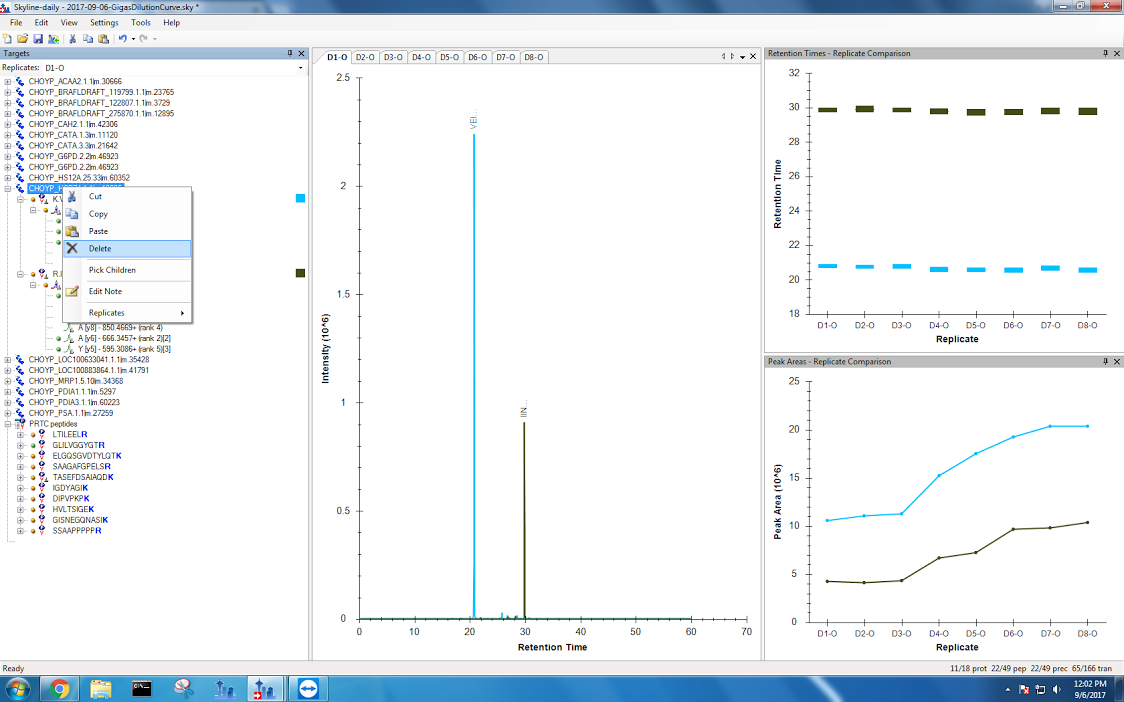 Figures 11-13. Peptides that increase in concentration when they should be more dilute. I originally deleted them from my dilution curve document, but undid the deletion to save the dilution information.

I was iffy about the multidrug resistant protein, but decided to keep it since peptide abundances decreased as I added less oyster protein. 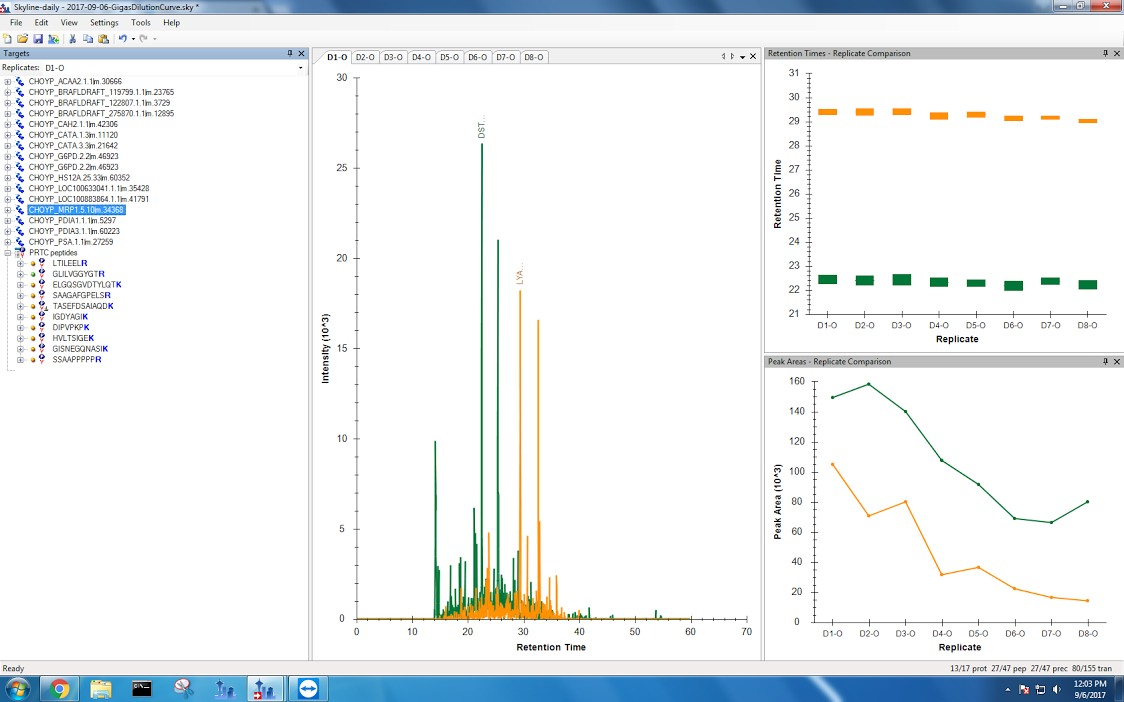 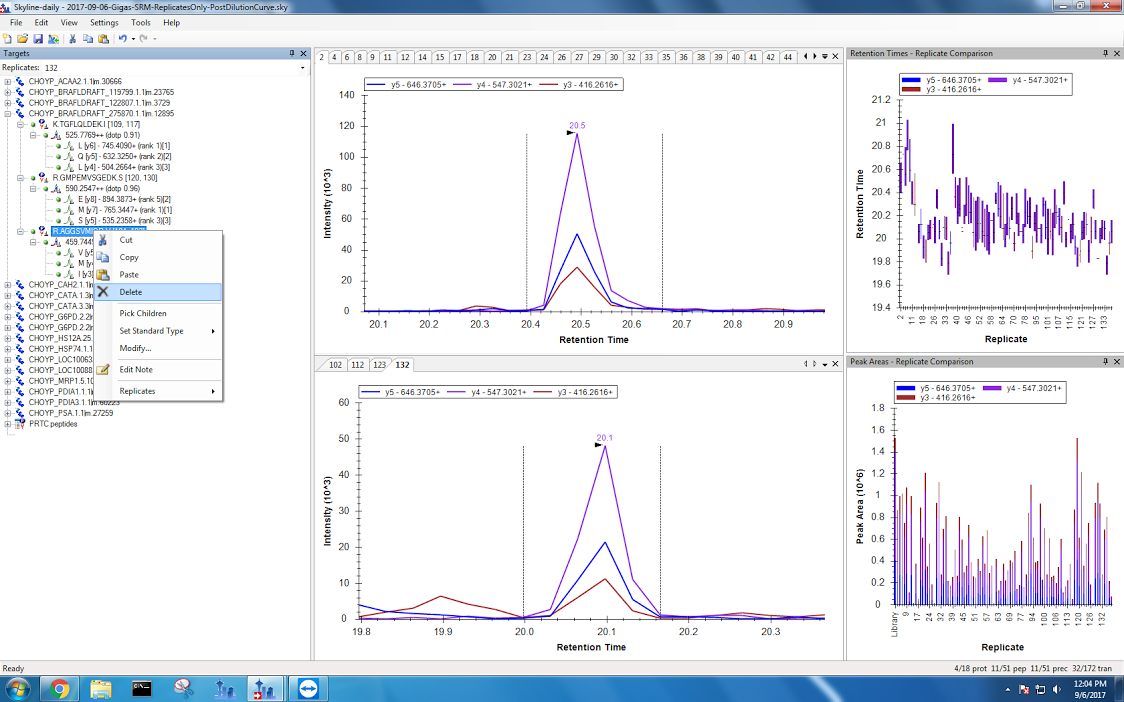 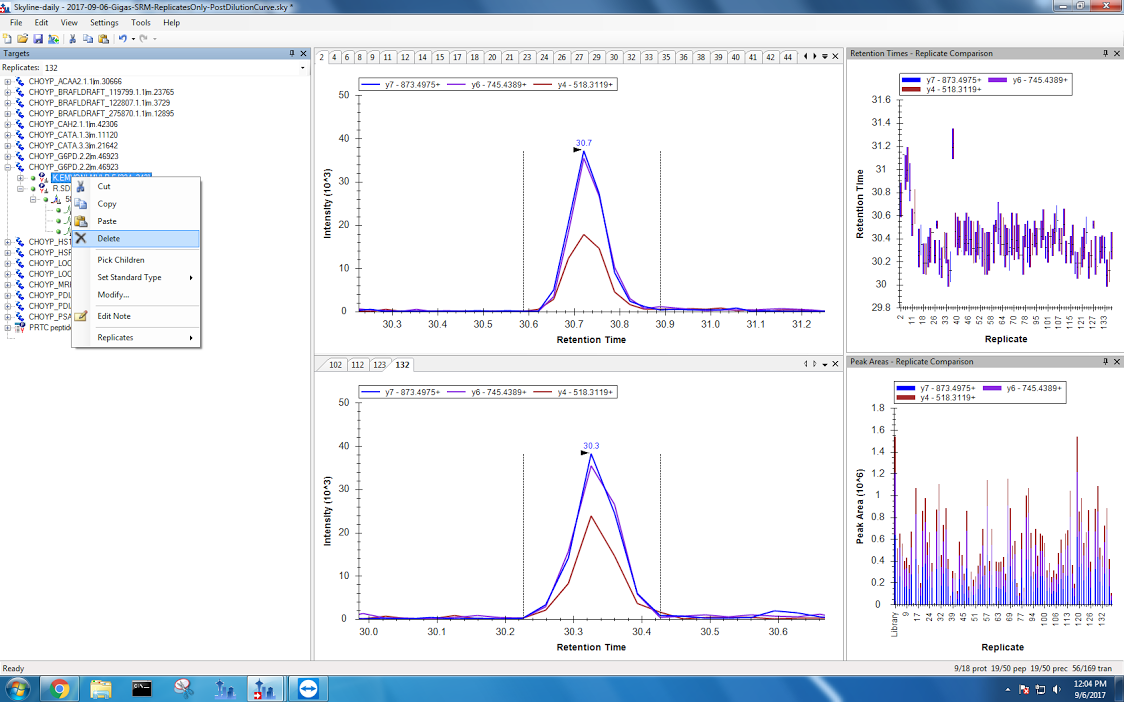 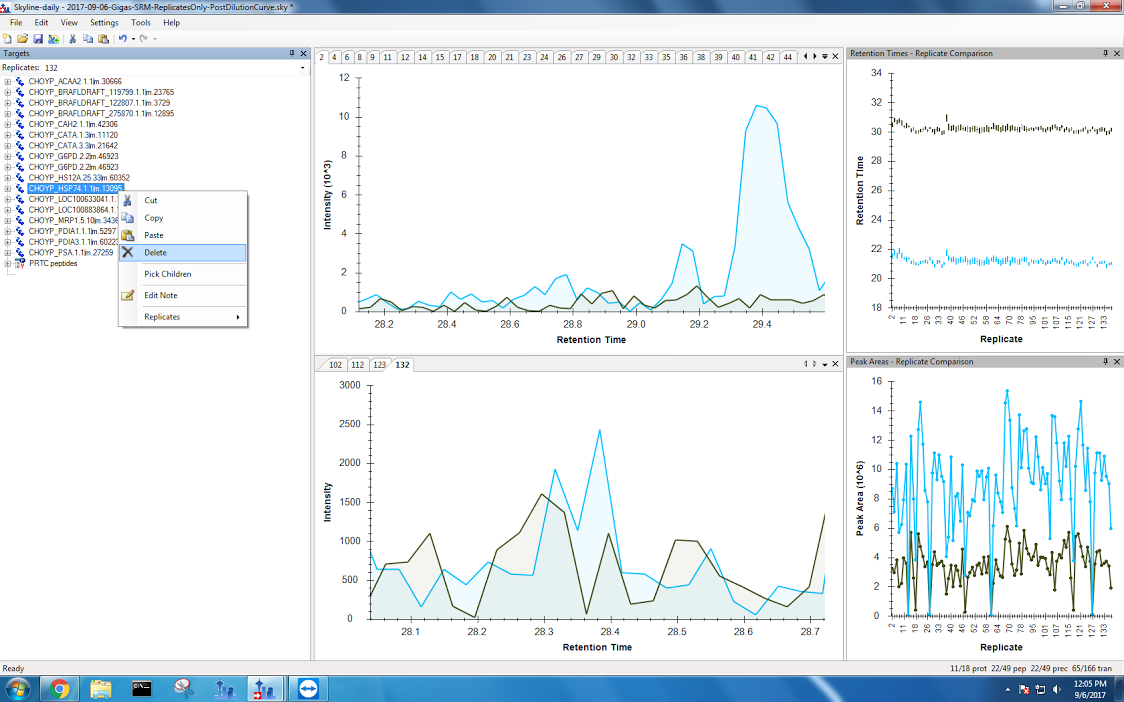 Finally, I re-exported my data. This time, I added total ion current as well. I have two versions: one with pivoting the replicate, and one without. 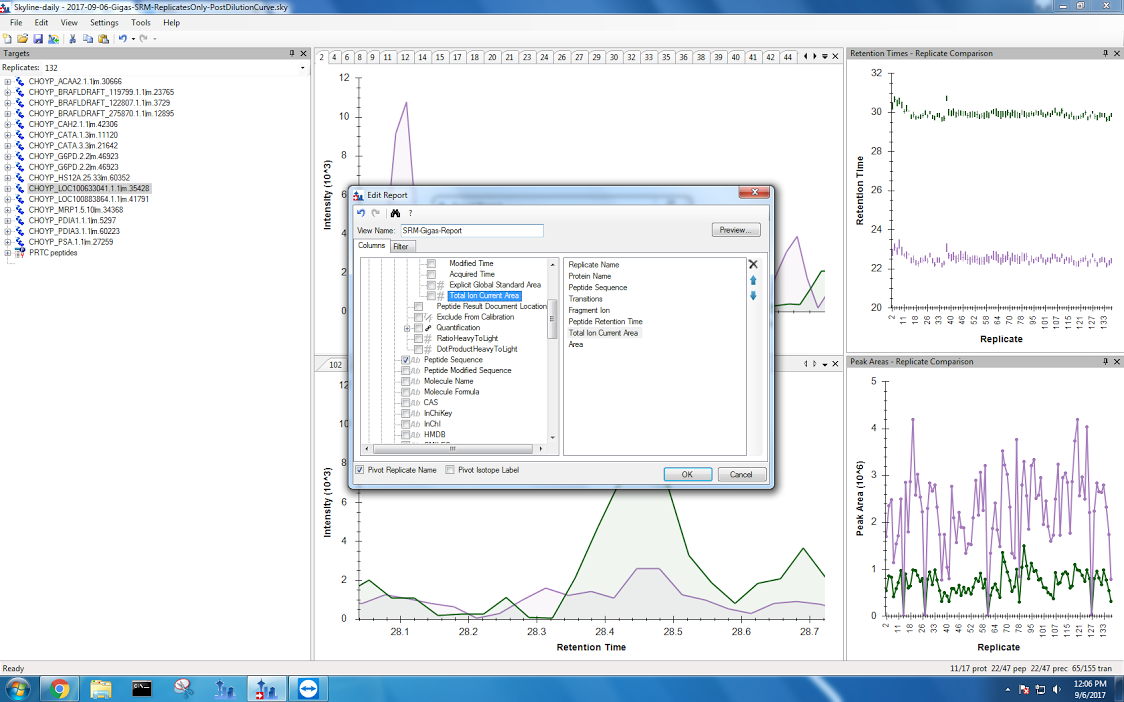 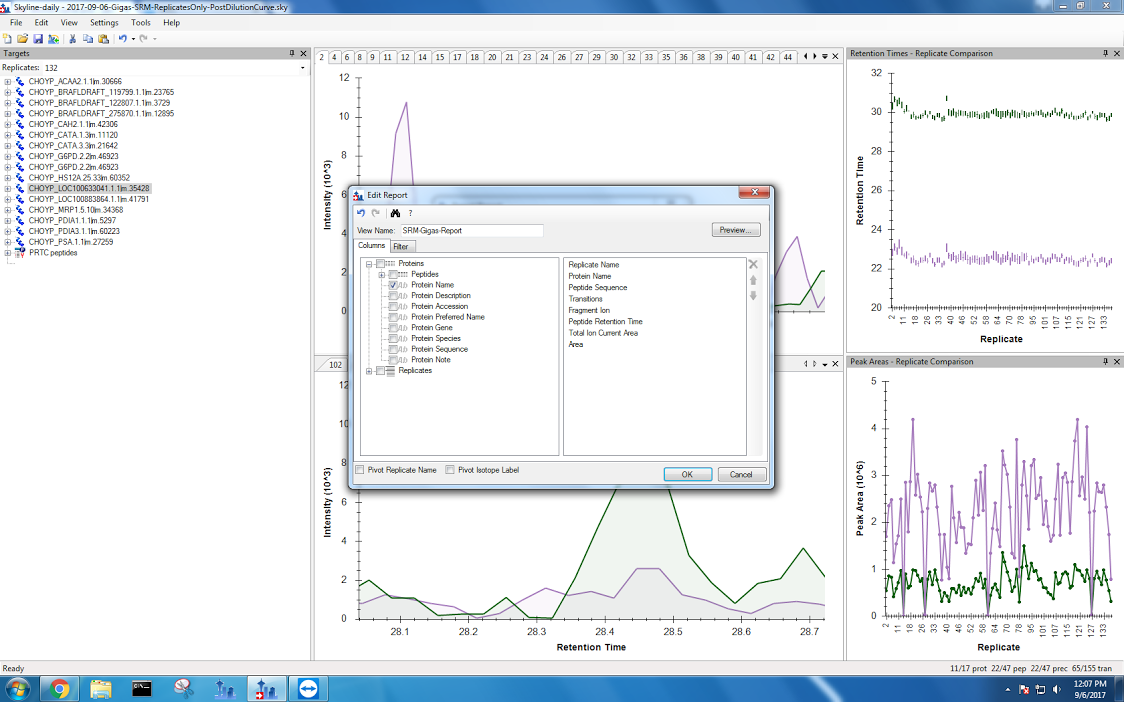 In hindsight, I probably should have done this before my initial data cleaning, but oh well.

Tomorrow, Laura and I are meeting with Emma to go over our PRTC abundances. When I emailed her about my loose batch effects and sloppy peptides, she suggested the following:

Hopefully tomorrow I have a solution so I can move forward!