Alright, I have R installed, which is maybe a moot point but I couldn’t get methylKit installed. Let’s see if I can actually run an R SLURM script today.

To install methylKit, I decided to use an older version of R. I first loaded the module:

Once I had the older R version, I was able to run install devtools!:

My next step was installing Bioconductor. I followed the installation instructions from the Bioconductor website:

The package started installing! However, I got a warning that I was using too much of the CPU. That’s when I realized I wasn’t on a build node! I stopped the package installation, quit R, and interrupted my mox session. I then started a build node:

I loaded the R module again, then installed methylKit:

It worked! The last package I needed (and almost forgot about) was dplyr. I ran require(dplyr) just to see what happened: 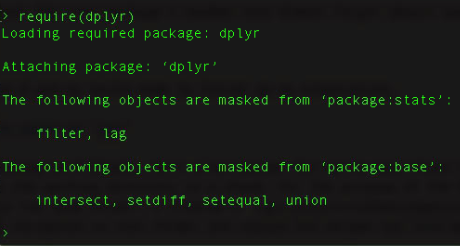 The package was already installed! I closed the Terminal window, logged in and requested another build node, and ran require(methylKit) to ensure I wouldn’t have to install the package again in my SLURM script: 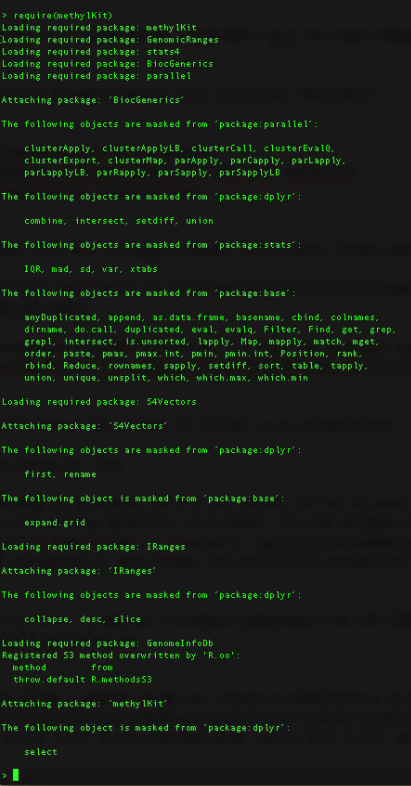 Since that worked too, I tried running sessionInfo(). Hopefully this information would be saved into my slurm-out file. 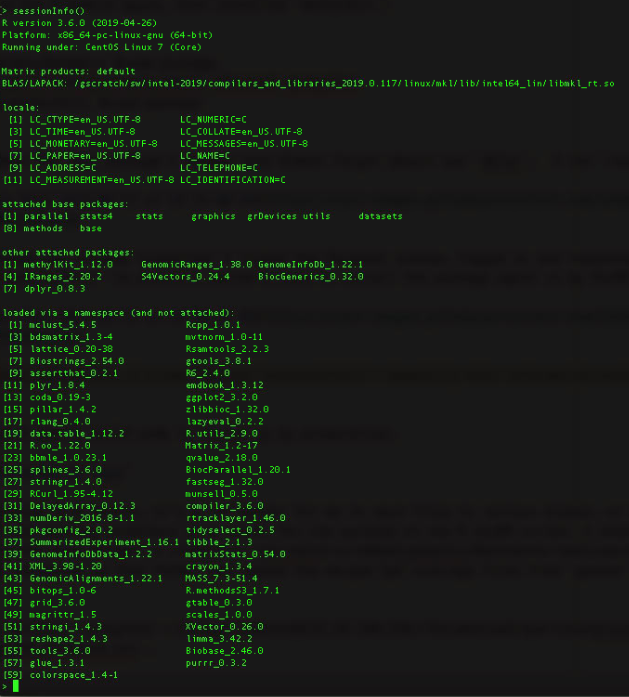 I exited R and my build node to finish up my preparation.

When working in R Studio, it’s a lot easier for me to save files to various places, or source the data from a different folder since I can set the working directory in a chunk. For the purpose of the R SLURM script, I think it’s easier to have all the data and output files in the same folder. I created a /gscratch/scrubbed/yaaminiv/Manchester/analyses/methylKit folder to house all relevant files. Then, I navigated to that folder and copied the merged CpG coverage files from gannet to mox:

The next thing I wanted to do was create a subdirectory structure that mirrored where I saved output files in this R Markdown script. I usually do this within the script itself since I can switch between bash and R, but I will not be able to do that in a SLURM script. I created:

All that’s left to do was create the SLURM script! I copied my R Markdown script into this SLURM script. Then, I ran the script. When I checked the queue (squeue | grep "srlab"), I found that my script wasn’t running! When I looked at the SLURM information at the top of the script, I saw SBATCH --mem=500G. I changed it to SBATCH --mem=100G, and ran the script again. Unfortunately, it timed out immediately!

When I looked at the slurm.out file, I saw the following error:

Obviously, my script timed out again. Looking through the slurm.out, I confirmed a few things. One, any head() command does print to the slurm.out. Second, I got an error that dplyr was not available when I ran require(dplyr). Additionally, there were some packages attached to methylKit that didn’t load. I opened another build node to install dplyr:

I then modified the script to load several packages at the top: 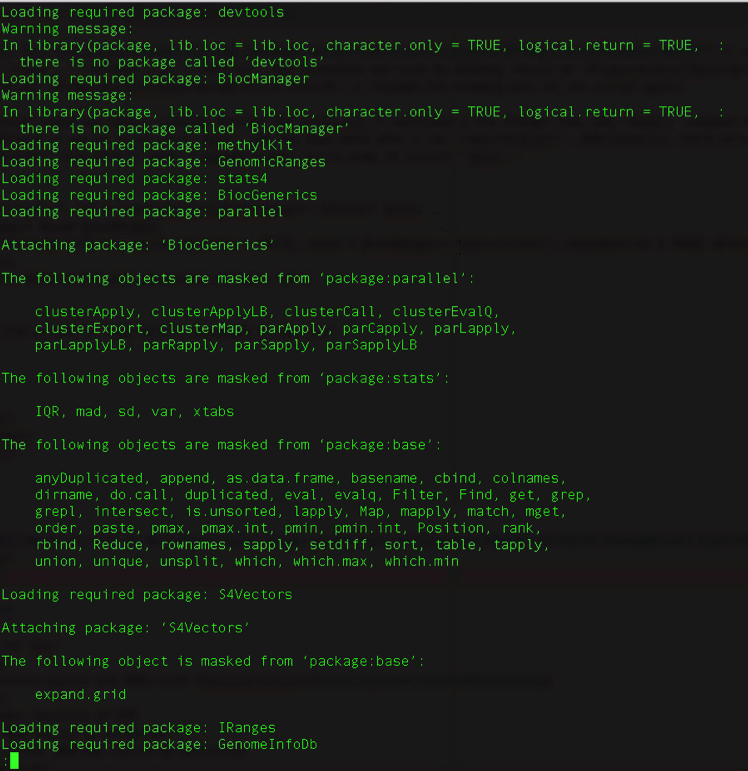 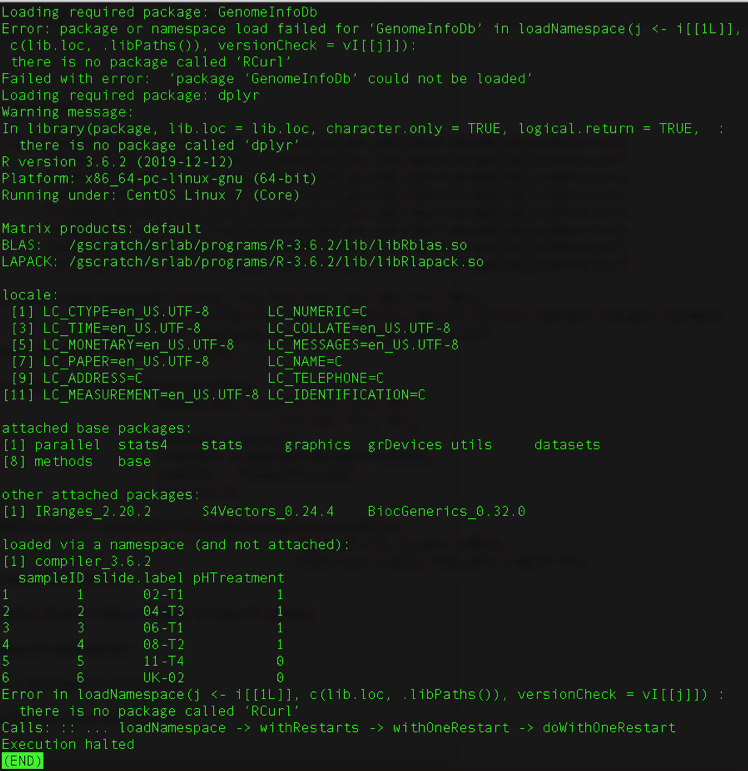 Once I ran this revised script, I ran into the same error! Based on the error messages, I think R was unable to find my specified packages.

I know I installed these packages, so I think they’re not being installed from their actual location. BiocManager, devtools, and dplyr are in the /gscratch/srlab/rpackages/ directory:

I posted this discussion to see if there was a way to reference library locations in require(). Why I posted this discussion before actually Googling I don’t know, but Sam and I arrived at the same conclusion: include lib.loc in require to specify the library location. This is important especially because I have packages installed in two separate locations! I modified my script and ran it again and encountered a new error:

Interestingly, when I loaded packages in the SLURM script, R was unable to find dependencies, even when they were installed (like usethis). I confirmed that these errors were precluding me from loading packages by running sessionInfo: 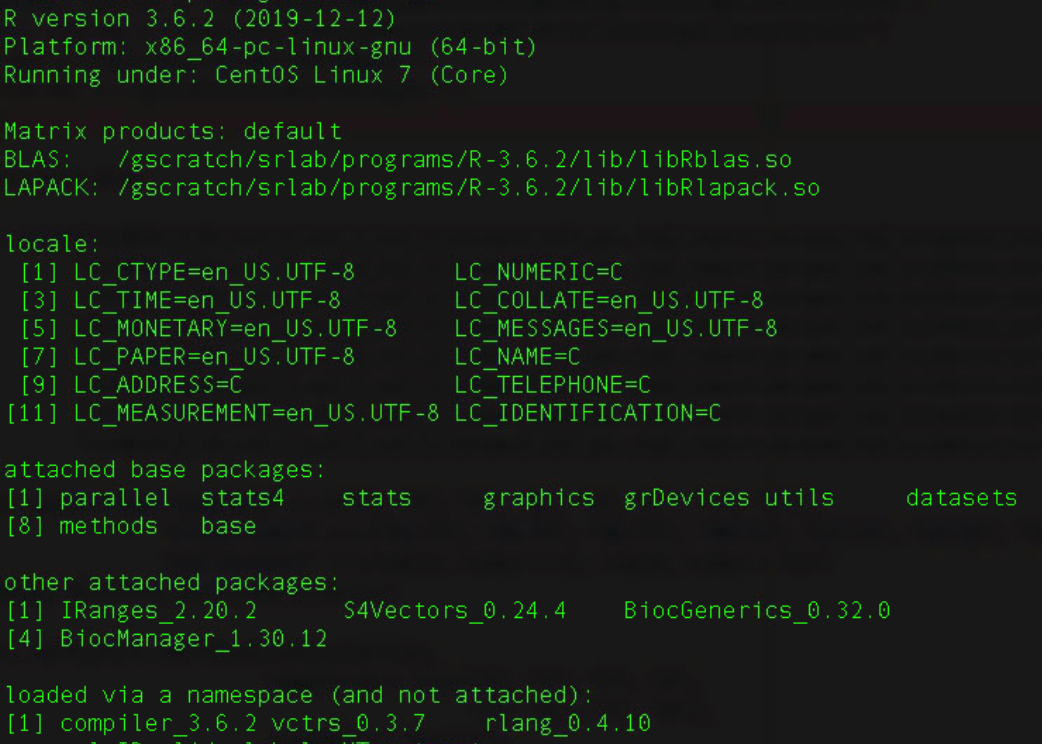 This began a series of installing packages, running my R script, and finding out I needed to explicitly install another dependency:

…so this is where I quit for now.